Schubert String Quartet No. 2 with Artis Quartet has wrong descriptions for movements 2 and 3

The movement description of Schubert’s String Quartet No. 2 in C Major by the Artis Quartet on Sony (see https://www.allmusic.com/album/schubert-der-tod-und-das-mädchen-d-810-string-quartet-d-32-mw0001361012 and also https://www.discogs.com/Schubert-Artis-Quartett-Der-Tod-Und-Das-Mädchen-D-810-String-Quartet-D-32/master/934195) has transposed descriptions for items 2 and 3. Here are screenshots of the movements: 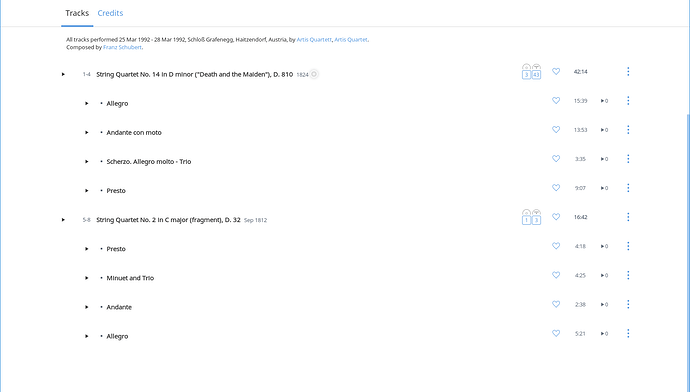 The second movement should be “Andante” and the third, “Minuet and Trio.” That is what the back cover of my CD says (actually, “Andante” and “Menuetto. Allegro - Trio”), and that is what the AllMusic and Discogs links say. I don’t know where Roon is getting these pieces of information.

James, I’ve moved this into the Metadata Issues forum for you…

If it is any consolation that Schubert SQ2 is one of these compositions with a long history. The 2nd and 4th movements were lost until the late 50’s. So for a long time it was thought that the minuet was the 2nd movement. That is why you can see “fragment” in the work title. It is also why post-war recordings only have 2 movements like this:

So for me, the bad metadata works as my minuet is the 2nd movement in this historical Westminster Records fragment. But more modern recordings like yours have a different running order and it doesn’t work. In fact I am not sure I understand why a full score with 4 movements is still being called a fragment in your screenshot? Unfortunately I find that roon’s metadata suppliers mess the metadata up more often than not where there is a history behind a work as in this case. Revisions and transcriptions are also handled really badly as well.

I just wanted to reach out and let you know that we have submitted a request TiVo about this.

How do I fix things now? Going to the track editor for the second track (erroneously called “Minuet and Trio”), I see that the Title is already “Andante” (correct; see screenshot below), but Roon is displaying “Minuet and Trio.” What’s going on? And what should I do? 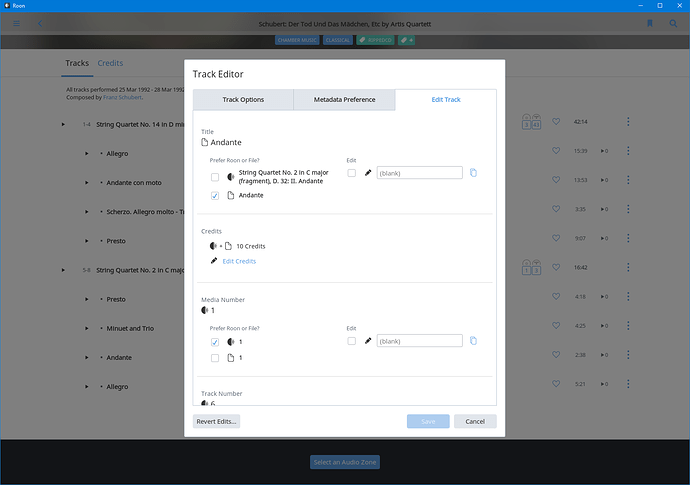 OK. Things are correct now. Thanks.