I’m using Roon and I absolutely love it.

However, I’m kind of disappointed with the scrobbling to last.fm feature. Indeed, it appears that Roon sends all artists credited for a song instead of just sending the Album/Artist.

Would it be possible to just send “Bryan Ferry” to last.fm ?

Thanks for you answer

I want to know the same, and thought this was one of the things to be solved in 1.3, but not sure I see any new options…? I might be missing something, the options are a bit confusing sometimes.

Hey @Conrad – I took a look here, and this is a tricky case. If you look at the track credits, you can see these people are all listed as “Guest Artist”: 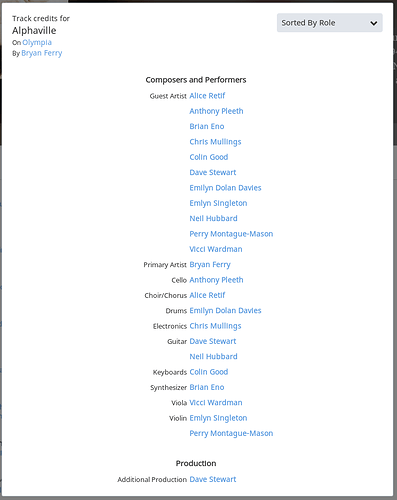 I would tend to agree with you – these people aren’t really “featured”, in the way you might think of a real feature, like say Paul McCartney on The Girl Is Mine.

Unfortunately, this is the metadata we’re getting from our metadata sources, and while we do sometimes submit obvious errors back to them, these kinds of issues are less clear-cut – I wouldn’t personally describe these people as “Guest Artists” but that’s subjective.

In any event, you should be able to edit these tracks and remove the credits – I believe that should make this content scrobble like you’re expecting. For the moment, I don’t think we’re going to add scrobbling options to remedy cases like this, since it would be impossible to consistently distinguish legitimate guests from ones we might consider spurious, like this.

Thanks a lot for you answer !

Anyway, a very simple solution would be just a toggle button saying whether the user want to send “Album Artist” or “Artist(s)”. Other scrobbling apps (QuietScrob for instance) provide such option. I don’t really want to edit metadata as it would imply checking for each artist whether it is “correctly” scrobbled or not…