Is it just me or have other users noticed this?

Since the last 2 or 3 builds, when using album edit and track grouping windows the scroll bar at the side has become invisible. Initially I though that it had been replaced by click and drag, but then by chance I realised that the scroll bar was actually still there and functioning, but completely invisible.

Sometimes click and drag is easier, but in edit windows with long lists but only 2 or 3 entries visible (especially when dealing with track grouping issues) it is torturous.

Until we finally get to use the scroll wheel (and click to select more than one track at once) in these windows it is always going to be painful, but without a visible scroll bar it is now even worse.

I did try switching from dark to light theme, but it made no difference.

I see no scroll bar in track edit and grouping or album edit screens either.

They already have admitted it’s a bug in my support request. Whether they fix it in next release is anyone’s guess.

Hey @CrystalGipsy, Thanks for reporting this bug — our team has confirmed it is a bug they’re aware of. While the Show Advanced option is not displayed, it has not disappeared. You can still access it by hovering over the Device Setup tab and scrolling down. It should show up. Sorry about the trouble

Thanks for that. I know what you mean about being able to “throw” the screen but the trouble is the lack of fine control.

I have never been able to use the scroll wheel in Roon edit screens although it works everywhere else, and I find this omission in the program highly annoying as well as just baffling.

Thanks for that also, so at least a fix should be on the horizon.

I don’t know if it is just me, but recently the functionality for navigating seems to have become less reliable, as if new fixes are breaking other aspects.

For instance using the keyboard to type ahead to move to titles much further down the view now seems to stop working unpredictably but very frequently. Going to a different view, then returning, always fixes it, but it never used to be a problem at all. The recently disappearing scroll bar is another case in point.

The fundamentals all work excellently, fortunately, but these niggles seem to be mounting rather than declining, which bothers me.

Is it just me or have other users noticed this?

That is correct. It was there… now it’s gone. I don’t know which recent update removed it. This screenshot is from Remote on Windows 10. 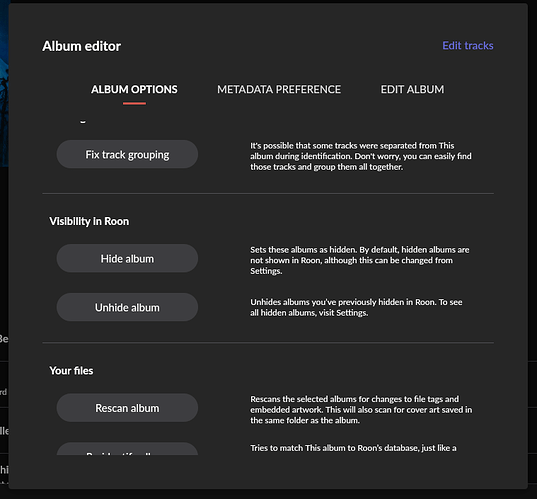 Thank you for confirming that it isn’t just me.

Having said that, I have to withdraw one aspect of my complaint.

After others said that the scroll wheel does work in edit screens I tried on another computer and found that yes indeed, it does.

The problem seems limited to the Corsair wireless backlit keyboard which I use most often as it is in the listening room. It is great in many ways, but seems primarily aimed at gamers, so it has a joystick rather than a scroll wheel.

The joystick can be used to scroll everywhere EXCEPT in edit screens in Roon, which in itself is peculiar. However, a little research and I found I could use it to scroll down by dragging 2 fingers on the touchpad.

All the other issues remain though.