Search is broken, it is indefensible

I’m fascinated that some folks find search markedly improved with recent Roon releases and others find it to be worse. Personally, I think some of the search behavior is laughably bad now.

Love train from the O Jays, Keb Mo, and Dylan. That’ll do me.

Did you rip it yourself from CD? Or did you purchase a download? Sorry, if you mentioned that detail already, I can’t find it in the thread…

I’m asking because yesterday I had basically the exact same experience as you: an album I know that is there, because I ripped the CD myself, couldn’t be found by Roon.

When ripping, I usually just let dBpoweramp insert the metadata it finds (unless I see something obviously wrong). I really have to change this lazy behavior… In my case (Claude Vivier: Kopernikus) it turned out that some metadata was incorrect… On the other hand, if a download has been purchased from the original publisher, metadata should be expected to be correct. But who knows?

Maybe your album has a similar problem?

But I am with you. Roon should be smart enough to find it anyway, let alone if you typed the exact album title…

So there is a clamour from people who expect Roon search to correct spelling mistakes. They are trying to do this it appears, but that means that some of the direct results fall behind.

If you use some search tools like searching for ‘love train’ with the apostrophes, it looks for that exact phrase. This is the same as would happen in Google.

Personally, I think spelling something right isn’t hard and maybe that should be given a higher importance in search. Realize that foreign composers that have multiple accepted spelling and non English characters matter that harder.

Interestingly, searching love train in Google gets you only hits for the track by the O’Jays for the first page… If that isn’t what you were looking for, it demonstrates that search algorithms are difficult.

Now, when you search, are you hitting the search icon? Once you do that, you can refine by albums.

Now, what would be nice to see, is that if you were in your album screen and you searched, then albums with that phrase would come up first.

Correction for common mis-spellings and alternate spellings isn’t a solved problem but there is no shortage of open-source libraries that do a much better job than Roon search.

Hi, the point was made above but let me re-iterate: if you add an album in your library by ripping or buying and for whatever reason it is not identified by Roon (case: metadata stored in your library has title “A” whereas after identification title should be “B”) then searching by album title = “B” would probably fail to show the library album unless B and A are somehow close grammatically.

I would ask the OP to share the album title under which his album was stored before attempting to “identify” it.

Well just a quick little example, btw could give endless bad results like this.
First the search by Roon / look at the results.
Then using Focus - different results. This shows what is actually in my library. So the info is available for Roon - as Focus has no problem finding it. So the “metadata wrong /unavailable “ theory does not really hold up.

If I did not know that I have these albums and just did a Roon search, I would not have an idea that they exist. So Roon search is not to be trusted. 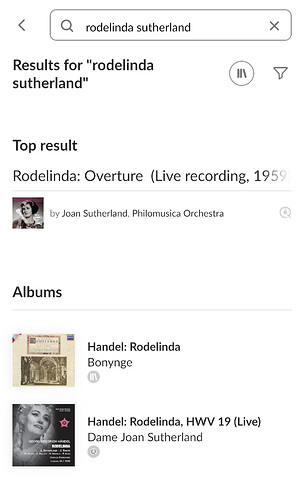 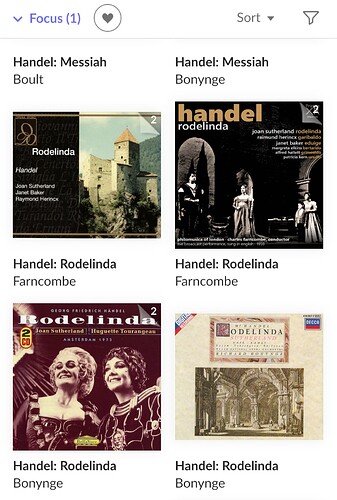 So the “metadata wrong /unavailable “

I’m afraid I disagree, it doesn’t prove that the metadata is wrong it just highlights another issue which may or may not be related to the search issue being debated. Comparing results that were achieved using different criteria (or methodology) doesn’t prove anything other than there are inconsistencies in one or both methods.

doesn’t prove anything other than there are inconsistencies in one or both methods.

Quite simply put - the second picture is to show you (the other users) that I actually have more albums fitting the search criteria in my library. So you do not have to take my word for it, you can see it with your own eyes.

I expect to find all of these albums in results when I do a search. Come on - is this not the whole point of a search to actually find stuff?
I really can not see how one can disagree about the results being bad in this case: 1 result for library in Search vs 4 albums actually in the library. This is bad - however one wants to put it.

PS: the metadata is not wrong.

Many discussions about Search remind me of something that just happened the other day: I live on the 5th floor of my building and water pressure can be really bad. So talked to the janitor about the problem and he said - no this cannot be right, since he has just been to MR X apartment and the water pressure was great - well, Mr X lives on the ground floor…
Turned into a ridiculous discussion - since the janitor did not want to accept that there is a difference…

Just a download from the web (perhaps via some file sharing program, we’ll never know) so not from a rip myself.

Again I fail to see why that has anything to do with the issue. If I record my own album and call it 1234ABC and stick it on my server, I should be able to find it if I type into search “1234ABC”.

I genuinely am baffled I keep having to respond to questions of metadata, when it really is a simple issue of matching a keyword in an index.

If I have a recipe book and want to find a recipe for apples, I go to the index and look under apples and low and behold I have found apples recipes.

If I have a recipe book and want to find a recipe for apples, I go to the index and look under apples and low and behold I have found apples recipes.

You should be more open to other options

The Roon cookbook would show you pears and pears are also nice.

Okay let me be clear (and I have posted this on images so you can clearly see) I am searching for the phrase ‘Love Train’ without apostrophes. I assumed that was obvious.

I have an album called Love Train. I am using the term Love Train to search for that album. The album is on my file server. The album is in my Roon. The album does not show up in search results despite the spelling being correct. This has nothing to do with bad spelling, punctuation, or streaming platforms.

I hope I have made that abundantly clear.

I hope I have made that abundantly clear.

No, you missed the point where it was you - that was the problem.

Biggest trouble seems to be (I am no expert) that mainly streaming users have less problems with search. With an actual album being physically in the library Roon can have all sorts of problems. But then the “streamers” say - no this cannot be. The two scenarios cannot be compared. They should be the same, but they are not.

is this not the whole point of a search to actually find stuff?

There’s no arguing with that and I’d agree Roon’s search is still far from optimal. What’s actually getting searched interests me some. Roon has metadata from at least, All Music, Tidal and Qobuz to try to amalgamate into some kind of coherent whole. Inconsistencies across these sources alone are probably a nightmare (acronyms or expansions, date formats, use of punctuation, etc.). Throw in metadata from local libraries that include vinyl rips, bootlegs, etc. on top and things feel pretty complex. Roon search doesn’t help itself, I still think the ability to limit a search to types would help, e.g. a checkbox for an album title that excluded results that were matching artist/track names. An album title search is a case where track matches (i.e. albums containing a track called Love Train) and “fuzzy” matches seem to be prioritised over direct album title matches, even to the point of exclusion.

It seems that this is turning out to be a general rant with no co-operation from the OP with the developer & no desire to rectify the problem.
I’m gone.

Yes, you are perfectly clear. And i agree this is unacceptable behaviour from Roon.
Still, you are looking for Apples in the recipe book of Roon. And as long as your recipe isn’t indexed (a part of your library), it won’t be found. The search boundaries obviously does not include “unidentified” albums and their metadata.

Workaround 2:
Use Album view and Filter, this works…

I don’t know what you expect from me at all? I’ve responded to a dozen comments on here including answering any questions I’ve been asked. What more do you want?

How can I identify albums that aren’t able to be identified? I have thousands of albums that have no matching metadata on Roon. Not everyone listens to well known bands and artists.

There is no way to mark an album as identified even if I have input all the correct metadata manually myself, which I usually do.

I’m not arguing with you… That leaves you with “Workaround 2” then.