I am a new user and I am hopelessly confused and let down by the search in Roon.

I have just done a search for “James Brown” and all six albums that Roon offers me on my iPad screen have little or nothing to do with James Brown. I get James Taylor and James Mcmillian, I guess because they are James’, Black Eyed Peas because maybe the album has a James Brown song or credit ., whatever, but no James Brown albums. And the first track Roon suggests is James Dean by the Eagles. Hopeless. Confusing.

I cannot believe that anyone with reasonable intuitions about what people expect from a search can find this acceptable!.

If you walked into a record store and asked for some James Brown albums, what would you expect to be offered first? 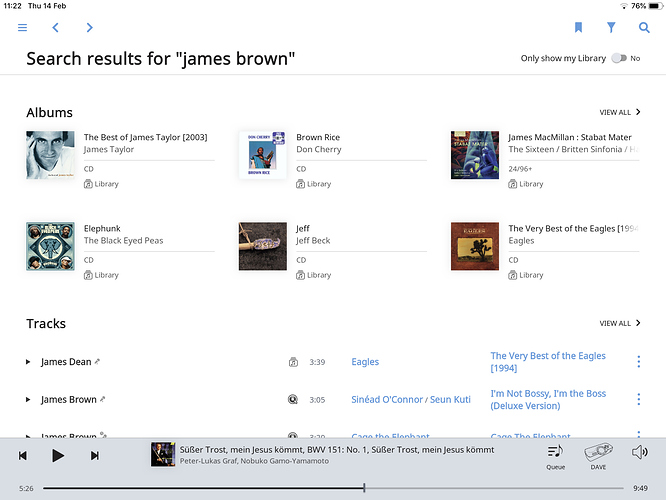 If you have any James Brown titles saved to your Roon library, or have one of the streaming services (Qobuz or Tidal) enabled in Roon, then yes, you will (or should) see results for James Brown/Artist as well as related albums, tracks, compositions etc.

If you have neither a streaming service enabled, nor any James Brown albums or tracks residing on your home database, then you would have a search result like you present in your post.

How many James Brown albums are in your local library and do you have Tidal/Qobuz subscription active in Roon is a good I think?

6 posts were split to a new topic: I have too many James Brown’s

Hi. I do not have any James Brown albums in my own library, but I do have a Qobuz subscription. I would expect those from Qobuz to be shown on the first page of the search, but they are not, they are only shown when I click the “View All” option next to Albums, and then they are shown after the six tenuous matches that Roon unhelpfully selects from my library. And talking of those six, while I can see how James Taylor, Brown Rice and James McMillan might be connected thinly to James Brown, I can’t see how Elephunk, Jeff Beck or The Very Best of the Eagles are. It simply looks like the search doesn’t work.

And why also there are four “James Brown” in the Artists section is hard to understand.

I’ve just discovered that if I filter the albums returned for the James Brown search by James Brown I finally get James Brown albums! If at first you don’t succeed …

This is really not an intuitive, helpful or sensible way of searching, surely. How do I explain to other less tolerant members of my house that if they want to find James Brown albums they first have to search for James Brown, they won’t get shown any, but then if they click on View All they will get some mixed with other things but then if they filter that lot by James Brown they will get what they wanted in the first place?

I’ve had similar experiences. See this:

I’m not at Frank’s level of indignation about search by any measure. But search does act unexpectedly/oddly at times. It appears to be some sort of interaction between Roon and Tidal: (1) Seeking refuge from the flood of Trump news, we decided to watch the Andy Griffith show. They had a fantastic bluegrass band on which triggered a discussion that we never listen to bluegrass and it is an interesting form of music to explore. (2) I first searched “bluegrass” - not having any “real” bluegra…

There is something that changes within Roon as before and after the first album for an artist is added to the library. And it is not consistent or it would be easy to reproduce. Roon seems stubbornly unaware of some artists in search until you find them, add an album by the artist, and then Roon pops all kinds of better search results. Not just the one album you added, but it is almost like you have to prove to Roon search that an artist exists and there is content in your streaming service for that artist, and then once proven you get all kinds of quality hits.

I’ve experienced it a few times but only noticed the pattern after the fact, so it’s been hard to document precisely or trace each step. But definitely something is unusual with the interaction between search and the streaming services relative to artists that don’t have any content in your library.

Not denying it’s confusing, but if you click on James Brown as Artist you will see all the albums in Qobuz.

This is really not an intuitive, helpful or sensible way of searching, surely. How do I explain to other less tolerant members of my house that if they want to find James Brown albums they first have to search for James Brown, they won’t get shown any, but then if they click on View All they will get some mixed with other things but then if they filter that lot by James Brown they will get what they wanted in the first place?

Searching for an artist James Brown, I would expect James Brown (artist) as top result. Than, intuitively clicking on the artist, I expect to see all the albums and a lot more informations. In section albums I expect albums named James Brown first, not all albums from him.

What you discribe is exactly the behavior of Google search. That works for artist, but not for albums, e.g. Black Caesar.

A post was merged into an existing topic: I have too many James Brown’s

Thanks, but when I click on James Brown as Artist I get a list of his compositions - individual tracks, 727 of them. I can’t see a list of Albums anywhere. I am using an iPad.

You may have Composer selected … switch to Performer. 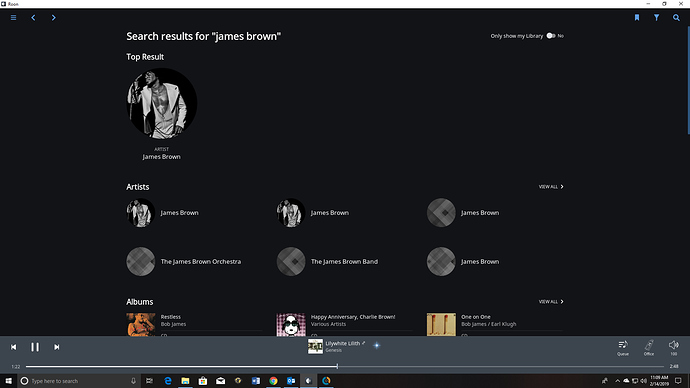 When I click on James Brown as Artist I get this: 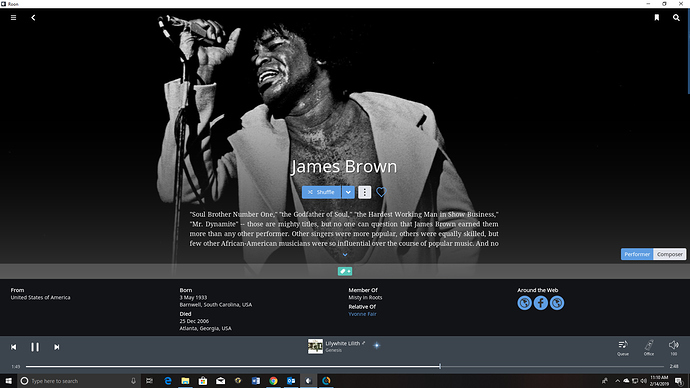 When I scroll down from there I can see James Brown albums: 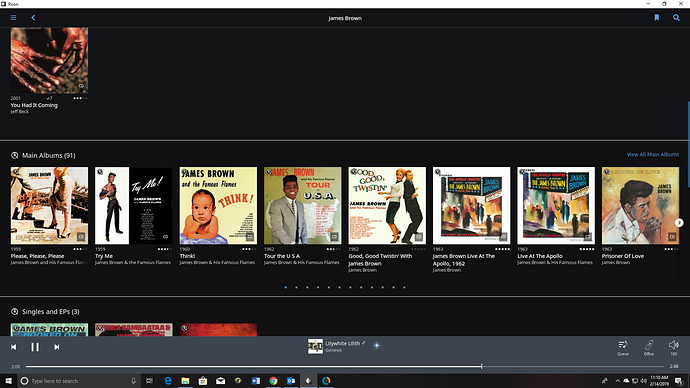 Where would I select Performer as opposed to Composer? When I click on the top pick Artist James Brown I get this, which doesn’t have the choice in your example. I am using an iPad. 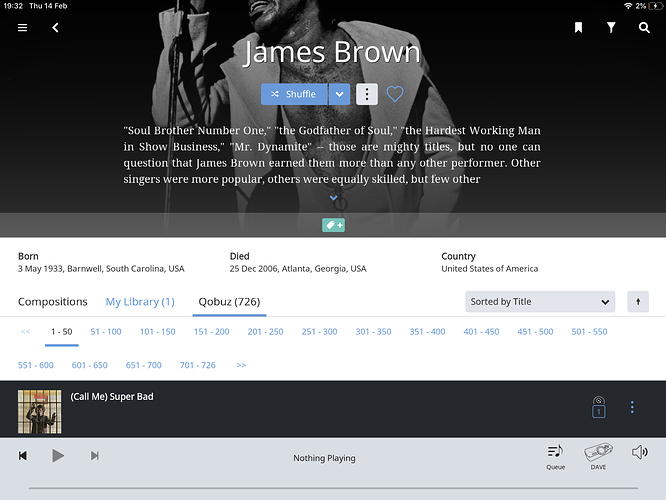 Are you using the latest version of the app? You should see the Performer / Composer buttons on the right hand side of the screen as shown in the image I posted. What James Brown album is in your library?

Hi, I am using the latest version of the app. As you can see from the screenshot I posted I do not have the Composer/Performer buttons. I have no James Brown albums in my Library (unless you count the composer credit in the track from the Black Eyed Peas Album).

If I do a similar search for John Coltrane, who is well represented in my library, I do get Composer Performer buttons when I drill down through Artist. But again, I only have individual tracks rather than Albums. But at least Albums section of the original John Coltrane search is a lot better than the same section for James Brown. At the start I actually get John Coltrane Albums, then some by people who play his tunes, then some more Coltrane. Again, not perfect, but somewhat better … at least there are no miscellaneous Johns.

But why do I only get the choice of Composer/Performer for the individual compositions of John Coltrane, but not for his albums?

I think this is the reason you’re not seeing Performer. Unfortunately, it’s the ‘other’ James Brown for the Black Eyed Peas … Elephunk by chance? (see I have too many James Brown’s.)

Re. Coltrane (or any other artist) the Compositions are going to be tracks since are often individual works.

Presumably because you have at least one James Brown album in your library.

This has been my point. Roon search can be very weird with an artist that is super prominent but from which you have no album in your local library. It’s like Roon search won’t admit that artist exists until you prove it, and then when you add one album and Roon downloads its metadata for that artist (or however that works), then all the sudden Roon acknowledges the artist’s existence, pops great search results, and shows albums both in the library and in the streaming service.

It’s weird and doesn’t appear to always happen that way. It’s just as a tool of music discovery, there is a functional gap that I haven’t quite figured out what causes it.

It’s just as a tool of music discovery, there is a functional gap that I haven’t quite figured out what causes it.

This behavior is caused because Roon prioritizes your library and considers all credits from your albums in the library. External results come after that. The (unwanted?) result is: the more famous the artist you are searching for is, the more likely he will appear in the credits of your own albums (as composer, producer, guest performer, up to the song title). Even if you don‘t have an album from the artist. This leads to (seemingly) absurd results.

It would be helpful, if especially for albums an addition would show, why the album is displayed. E.g. „My generation“ from The Who (composer: James Brown) or „Wasting light“ from The Foo Fighters (production engineer: James Brown). Like it is already done with top result.

You actually had me searching to be sure that Pete Townsend wrote My Generation!

I don’t have enough confident info to contradict what you say about what causes this. It certainly is at least partially true. The part that I am not sure about is that it is not just about prioritizing the search results for the library first. My recollection, fairly strong, is that when this happens, there are not even good artist search results in the Qobuz/Tidal section of the search result. Take a look at the post that I linked to above - about bluegrass - the only search hit for one of the most famous bluegrass musicians was a single track. Once I clicked on the track, it was actually the whole album by that artist, and when I added that album, search results for other albums by that artist were then much, much more. It was like 2 different searches.