Liking most of the choices the team there are making for the Roon UX as it evolves. Especially loving all the relational linking of an album or artist to others related / similar / influences/ing / etc … And where the "Now Playing … " panel has evolved to with the configurability of what meta categories may show and what order (tho, I do wish as a song plays there was an option I could also click in the pane’s configuration to have Roon cycle thru every one of them; but that may just be me). I do sometimes question the choices of Roon Radio (of my local library; I don’t stream) based on the last song played, but the vast majority of the time it continues to do a fantastic job and reminds me of or surprises me with the music I have in my 50K+ tracks that I may not have listened to in decades or never before. I could go on.

But one thing I would like to have the developers there address is this… I’d like to request you to add an item to the backlog that:

A song or album with an “exact string match” in Search Results, regardless of what position that match starts in in the match’s album or song’s primary meta data, be ranked higher than other results.

I think if I gave that more thought I could have worded that better. But as a picture is worth a 1000 words, let me add some screen caps and detail.

But first, what was I doing? I was doing some filesystem organization and moved some of my CD rips around to different sub-directories from where they originally were. I lost track of one album I knew I had in my Roon library. I went searching for it …

So, I first thought the album name was something like “Ultra-Lounge: The Leopard Skin Album”. But I didn’t find that (or similar) either on my filesystem or in Roon when I searched for “leopard”. So then I simply searched for “Ultra-Lounge”, and this was the quick pop-up search summary results … 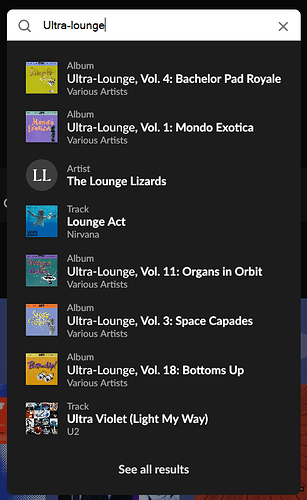 Based on what I cited above that I thought was the album’s name, I was looking for an album cover that was “leopard skin”. As I didn’t see it in that list, I went my my file system and searched for “Ultra-Lounge” there instead of “leopard”, and I did finally see the album name. So I continued…

Then clicked “More” in the “Albums” section. Now, if I have Roon maximized on my 2560x1440 (landscape) primary display, 21 albums show on the screen at once. I still did not see the album I am searching for in the list. (Sure, I could page down. But the whole point here is, how far down should I have to look for something that has an exact match in the name?) No screen cap necessary. The next two should do the trick.

It is only when I have my Roon UI maximized on my second 1200x1920 (portrait) screen, that I see the album art that I’m expecting to find on the “first page”: 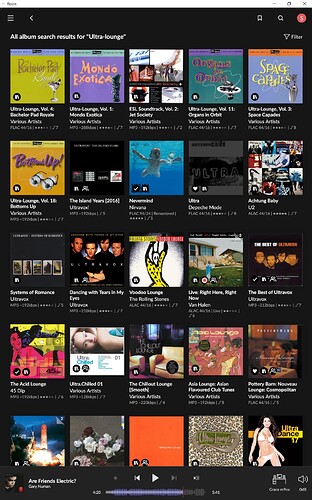 A single click down of the center mouse wheel brings the album title into view too. 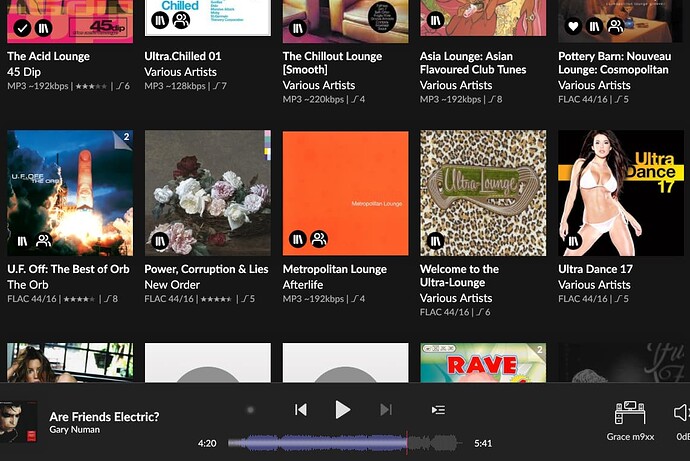 It really seem to me that the right thing to do would be to rank that higher. Because it is a search result hit on the entire string that I was searching for: “Ultra-lounge”. [edit: removed the add’l point I originally made as I dove deeper into all of the search results and I didn’t find that to be as strong an argument as I had originally thought.]

Thank you for listening. Hope this makes it to the backlog and that the stakeholders agree with my logic (if I can be so bold as to call it that -haha) so that this adjustment to the ordering of search results is made in a future release.

In a case like this, using the Filter on the search returns is a quick way to sort through return options.

Thread drift, but it’s always good to see someone else with a taste for the Ultra Lounge Collections.

I see. So if I then click “Filter” and again enter “ultra” it does reduce the size of the returned list. And rather than position 24 I find the album in question in position 12. But if instead I am not lazy and type the entire thing, “ultra-lounge”, the album is in position 6. [correction: just need to type “ultra-”, not “ultra-lounge” to reduce the list to just what I expect to see; even better.]