Track names that show up on the album screen are weird “No. 3b, Meco all’altar di Venere (Cavatina)” followed by "Act 1. Scene 1. Odi? … " which is to say, only a handful of track names have Act and Scene. Note that these are Tracks 4 and 5 on the first disc in the set. (Here’s what the track listing looks like:) 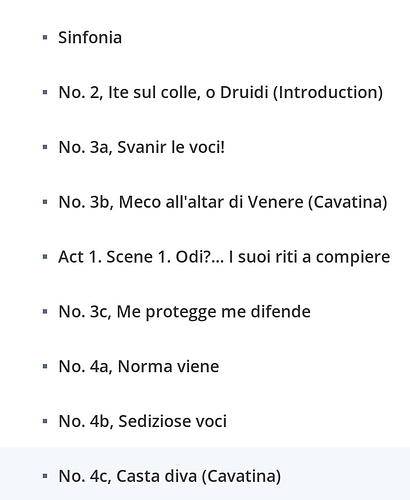 (FYI, Act 1, Scene 1 actually starts with the second track.) So, go in and edit, right? But when I try to edit the track names, I see something quite different: “Norma: Act 1, Scene 1. Meo all’altar di Venere (Cavatina)” for the Roon data, "Bellini: Norma: Act 1: … " for the file data:

Neither has this “No. 3b,” business. (Track # in metadata is “4”.) I’ve chosen to display the Roon data, but I’ve also tried editing the titles in “edit track.” Under “Metadata Preference” I’ve tried several choices but it doesn’t seem to “take”; which is to say, when I look at it again after saving changes, the choices are unchanged.

Ideally, this would be displayed something like this:
Sinfonia
Act 1
Scene 1
(Track 1 title–no numbers)
…

and so on. but that may be asking a bit much. I’m really just looking for consistency; if the act number and scene number is going to show up on some tracks, shouldn’t they show up on all?. Again, there’s only a weak correlation between what I see when I try to edit track info and what I see on this screen. Editing via the Roon interface doesn’t seem to be working.

I know nothing about classical, and I’m sure others could help you better, but have you tried to re-Identify Album?

There seems to be lots of different versions of this and maybe Roon picked the wrong one.

Thanks Greg, but that’s not the problem. Track lengths match over three separate disks. It may be a different release but it’s the same recording. Anyway, the real mystery is why what’s displayed when you view the whole album is so different from what you see when you try to edit tracks, and why my changes don’t show up.

@Jim_Austin – I can look into this, but I’m guessing this is exactly the kind of issue we’re focused on addressing for our next major release after 1.2.

With good metadata from our providers and a direct match to an album, we do very well in these situations and achieve the desired outcome, which is to de-emphasize the individual tracks that make up a multi-part work, and focus on treating multi-part works with the care they deserve.

Tracks are really a relic of CDs and while there may be times you want to jump right to a specific movement, if you’re listening to this type of music you’re likely to think in terms of composers, their works, and the performances of these works. That’s the actual context of this music, and our goal is to highlight that.

Of course, the data isn’t always great, and the matches aren’t always exact, which means “near misses” can occasionally create havoc like this. Not only do we expect our automatic detection to get a lot better once the upcoming work is complete, but with full editing implemented, you would be able to correct this yourself. This is a top priority for us this year, and we’re looking forward to shipping 1.2 soon and getting started.

For now, would you mind posting a screenshot of the album page? I want to get a better sense of how Roon is grouping the tracks, and what identification we got here, so I can compare to what we have in the database. Then, hopefully I can give you a sense of why this has gone awry, and whether there’s a simple workaround.

[I’m deleting this post because I realized I was responding to the wrong thread. Will post an appropriate response soon.]

Mike, OK, here’s the screen shot of the album page. If this isn’t what you want, please let me know and I’ll try again: 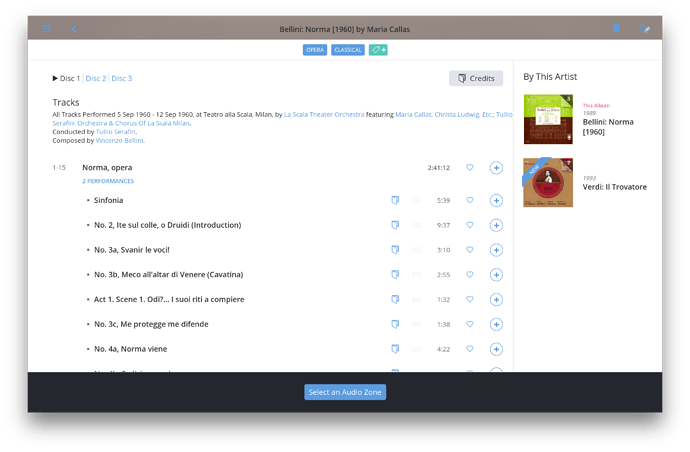 Here’s the track-editor page for that second track (“Introduction”); this shows the lack of a simple, obvious correlation between what’s displayed and the metadata choices: 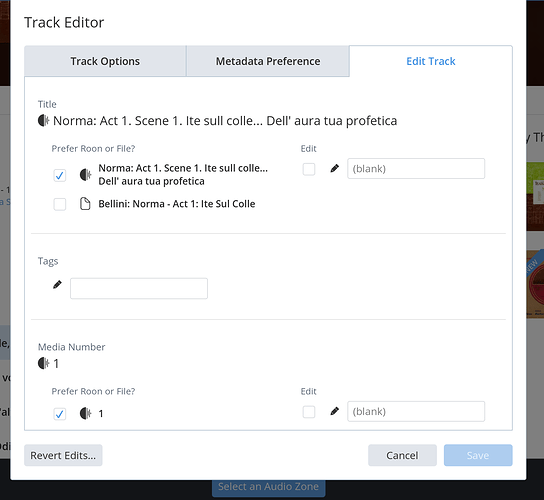 Please let me know if you need anything else.

Here’s another image, from another imported opera, that I think illustrates the issue I’m describing really well: 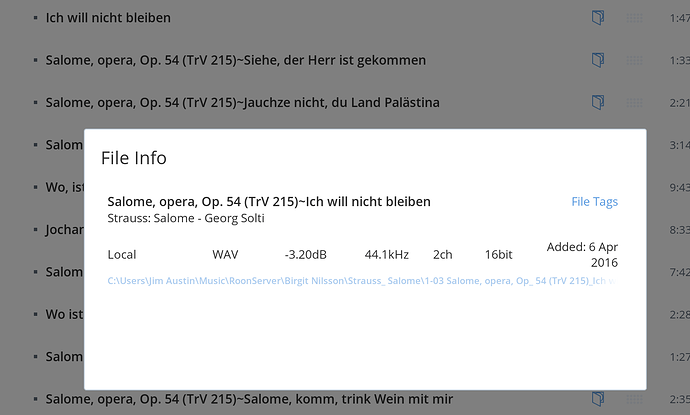 The File Info box here refers to the first track you can see in the grayed-out part (“Ich will nicht bleiben”). Note that the track title shown in the file info has exactly the same form as the other tracks–name of the opera, opus number, some other identifying number, tilde, then the actual title of the song–but in some tracks, including this one, that other information doesn’t show up, only the title.