Seems some of my devices have reverted to no XL builds

@spockfish Harry not sure what’s happened here…both the non XL endpoints until the other day (I use them for Spotify playback) were definitely on XL … only changes I had made was to reboot schedules to get updates installing automatically.

Other issue is that the one that is B382 seems different to the rest…is this a RPi4 anomaly?

The other one… I can understand why it thinks it’s not an XL anymore. I’m just puzzled how that happened. Maybe it’s related to setting the reboot schedule…

Found it! I can reproduce this indeed by changing the reboot schedule.
How bizar.

Fill fix this ASAP (this weekend).

And… I owe you another beer

Does this mean a full XL flash again or it it still there in hiding?

@spockfish oddly if I append the http://192.168.0.41/ropieeexl web link I do get the menu page but its still not displayed in the frame tabs 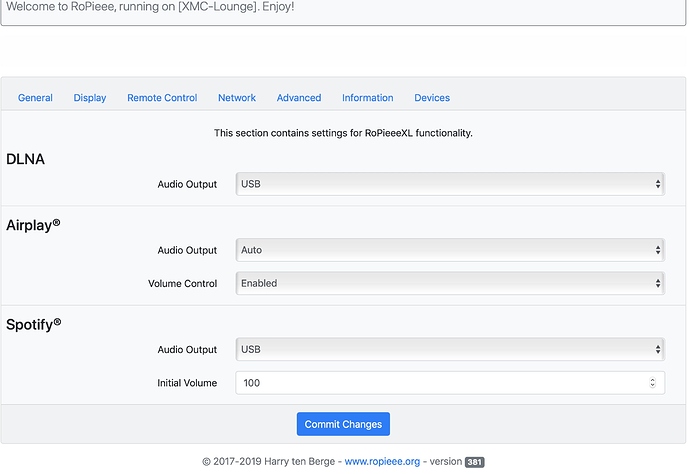 No that’s not odd. The bug confuses the system in ‘forgetting’ that it’s an XL unit, but the tab is still there if you know where to find it.

So a reload of the SD card wont be needed? I hope not as the 2 units in question both have LCD’s and taking them apart is a PITA

Nope. You can also change it manually by editing /etc/ropieee.conf

Make sure the rp_this_is_xl is set to 1 (right now it is emtpy, which is the problem). So it should look like:

Thanks Harry…will get to that edit later maybe but for now they are all working the same as before…listening to Spotify on one as I type.

Ok I edited the /etc/ropieee.conf and the corrected line is saved and after a restart I see the XL menu but the name is still only Ropieee not RopieeeXL

What do you mean with the name?

With the name in the [Ropieee] after the configured name that’s still not indicating XL - Im in Bangkok now so have no way to update or see my nodes now if there was an update.

ok, you need to make sure that it’s been reconfigured.
Go into the webpage, press commit and save (without actually saving anything).
It will now reconfigure and after the reboot everything should be fine.

So just a reboot is not enough then. will do so when I get back in a few days.