Checking through the library Roon generally does a great job of identifying classical artists and composers but has failed dismally with this set for some odd reason. 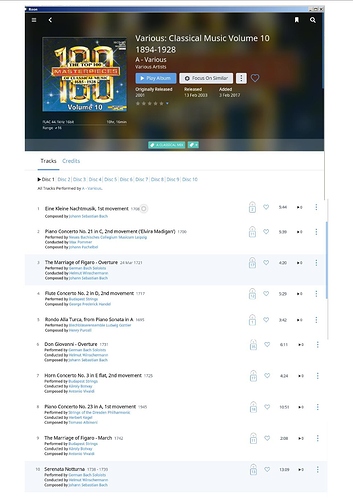 I apologize for my bad wording. My intent was to underline the harsh reality that,given Rovi and
Roon have many problems correctly handling metadata of important reference and original recordings, we should not expect that such compilations be given a high priority in the list of problematic albums.

Apologies again to the community.

Is it just correct track in the wrong order, which is easily fixed or is it just plain wrong?

The labelling of each track is completely wrong in regard to the composer. Can that be seen in in print screens?

I went to Tidal and saw that the discs of this boxset are listed individually as Vol.1, Vol. 2, etc. I imported Vol.1 in my library, identified it by matching it to the Vols. 1-5 subset proposed by Roon : 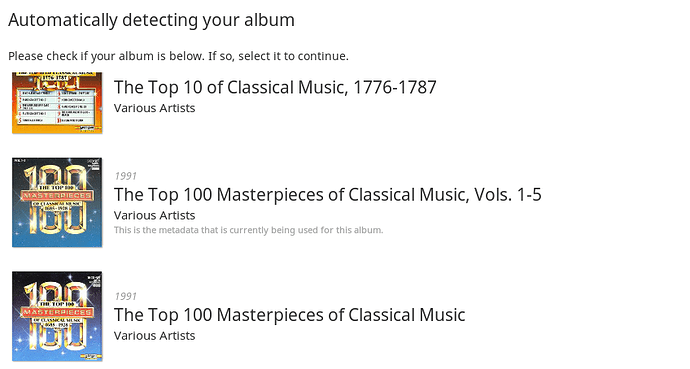 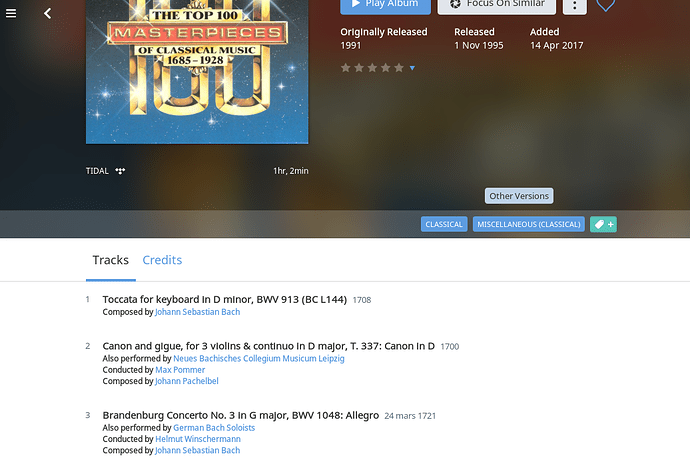 I repeated the exercise by importing the Vol.3 of this boxset available on Tidal. 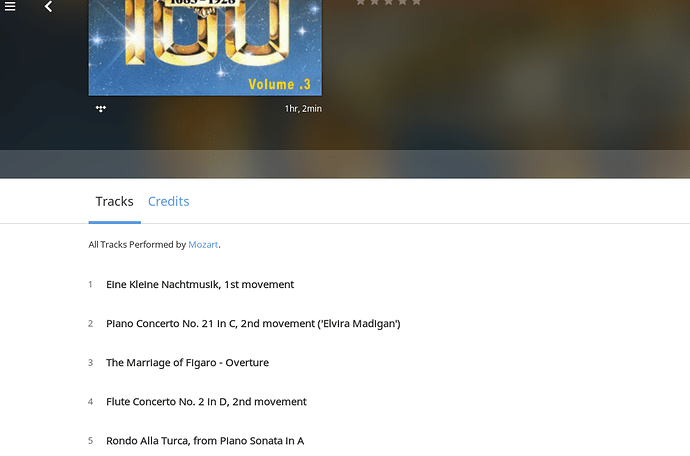 Capture11.PNG989×655 159 KB
The track titles are those seen in your original screenshot,and my screenshot shows the correct composer (Mozart).

I guess your data come from a rip of the physical CD’s. Could you try putting up a folder with just the rips of Vol. 1 and try to identify them in Roon the way I did, and repeat the steps for Vol. 3 .I expect you should obtain correct results, similar to the ones I myself obtained after importing and identifying the same albums on Tidal. This could point in the direction of a mix-up of the track rips on your side, or otherwise, on a problem inside the Roon database.

I tried a couple of things. First up I removed the album from the collation -> no change, composers still incorrectly labelled

Next I went back to Sooloos (all CDs sold so I do not have the original discs any more) and downloaded Volume 3. Roon accepted it and asked to merge - OK. Same result. 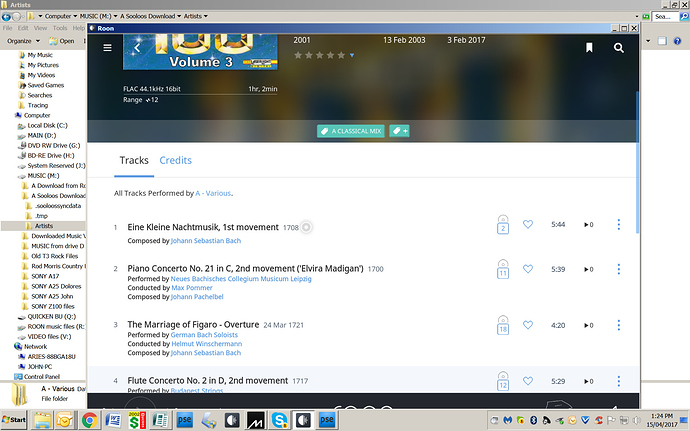 I even deleted the file in Roon and copied it across again - same result.

So, from your experience it almost seems as if Sooloos has somehow corrupted the data although I’ve not struck this problem elsewhere - data has ported through without difficulty and compositions have been correctly identified.

Two more albums in that set also have the composers wrong but the remaining 7 are correct!!!

Make sense of it for me please.

Having just discovered Roon actually does have track editing I asked it to re-identify the tracks - hey presto, now all are correct.

Sigh. I’ll get there eventually.

Damn, this story is not finished.

In Roon style the amended album, now correctly showing Mozart, flipped itself out of sight. Finally located it and collated it back to its fellow 9 albumsd BUT there we go, incorrect composers in again as above.

So, edit, reidentify -> correct labelling for a second but then it flipped back to the incorrect state. Exactly the same thing happened with the other 3 albums. Re-analysing achieved nix.

I’ll now remove all 3 offending albums from the collation on the assumption they are adversely interacting somehow. They will be re-identified and when correct will be re collated.

LATER: Nope, did not work. OK if the album is by itself, but immediately there is any collation, back comes the incorrect composer labelling.

Sort of getting a bit tired of this as I guess those bothering to read it are but I’ll try a couple of other things.
No more additions to this post will mean the problem was not solved.

Not really solved but I’ll live with it.

The three offending albums retain (or are doing so now) their correct composer labelling if collated together but NOT if collated with the other 7.

So, not a catastrophe, but it seems the 10 cannot be collated together so I’m ending up with 2 groups, one collation of 3 and a second collation of 7. Putting them all together appears impossible.