Settings for HQPlayer desktop with Pi and Digione sig

Hi,
I’d like to try HQPlayer desktop. I’ve not got it to connect yet though.

What settings should I use? I’m simply looking to use Roon and stream Tidal/Qobuz at 24b 192kz. Nothing more exotic….yet.

The input and output drop down boxes are empty on the settings page.

Normal RoPieee is Roon only endoint.

I’ll rewrite the image onto the SD card. Alter the settings in ropieee gui too. Is there any change in roon when going from reg ropieee to XL?

Is there any change in roon when going from reg ropieee to XL?

If you really like HQPlayer in the end, my recommendation is to burn the NAA RPi image to SD card. It’s basically NAA OS created to do one thing only.

I had some issues with DigiOne and RoPieee that disappeared with NAA OS.
DiGiOne connected to AVR in living room.

There’s a trick you need to do, to a file on the SD card once you’ve burnt the image.

I shared the trick here:

Once you burn NAA OS to the SD card thats it, there’s nothing else to ever do with the DiGione. No other settings. Its ‘set and forget’.

I haven’t touched my DiGiOne or its SD card in many many months since I first ran NAA OS.

Its free to try anyway.

Yeah I was sitting on the fence with the desktop v image on SD card.

On my kitchen set up, I also have headphones as well as speakers. I’d like to be able to tweak sound settings for when I’m listening to the cans. So I thought I’d have flexibility to do that on desktop.

But the ease of having the Pi running HQP is appealing.

But I’ve realised I quite like to tinker, so maybe DSD in the future?

Thanks for reaching out. Much appreciated.

But the ease of having the Pi running HQP is appealing.

So your HQPlayer Desktop would see it just like RoPieee XL NAA. More reliable in my experience, as mentioned above

Except NAA OS is made by Jussi to do only one thing.

Whenever anyone mentions NAA , think of HQP endpoint

I’m still not getting sound though😡 Bloody thing looks like all is good in Roon too, but no sound.!

Have I missed something in settings? 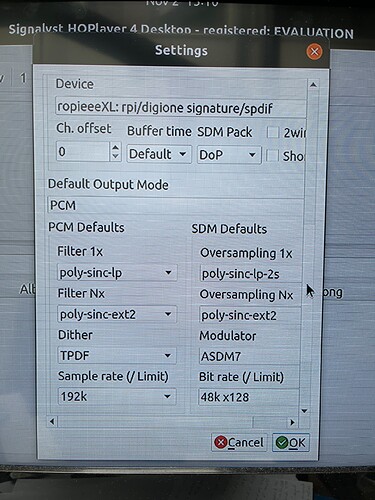 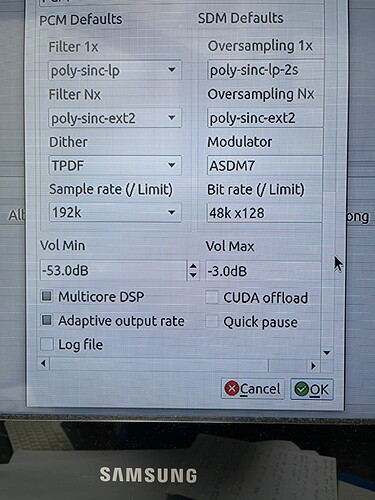 Hard to tell because your screenshots are cut off, but you’ve selected your DigiOne as input? Instead of output?

Yes but couldn’t open the links for Rpi. What are bins? I presumed they were different settings pages?

The plan was to see which HQP method suits my current needs.

I will have a look at your tips, after trying the desktop version.

When I’m ready to try using HQP on the SD card, I’ll check your overlay tip

Yes but couldn’t open the links for Rpi. What are bins? I presumed they were different settings pages?

So the NUC is not the output? And the RPi not the input?

My thoughts on how this works is out of whack then.

HQPlayer is the server. So HQPlayer server output has to be the RPi NAA (DigiOne).

HQPlayer input for you will be Roon but you don’t have to set Roon input in HQPlayer - that just works magically. So set HQP input to nothing.

At this stage, I’m only really interested in using spdif, as all my Pi’s use it. So this limits me to 24b 192 kHz, but if all my music was played at this level, I’d be very happy.

So should I set dsd to lowest levels, or possibly turn it off all together?

Looking forwards and off topic. Theoretical question….Is the RPi + Digione Sig unable to pass DSD 256 onto a DAC that can support this?

Reason for asking is that I have a Pi2AES arriving soon, and wanted to connect to d90se DAC via HDMI for i2s and the options of DSD (depending on what my little NUC can handle)

Is the RPi + Digione Sig unable to pass DSD 256 onto a DAC that can support this?

Really good option is the RPi4 and its USB output

RPi3 USB output is no bueno at high sample rates

Reason for asking is that I have a Pi2AES arriving soon, and wanted to connect to d90se DAC via HDMI for i2s and the options of DSD (depending on what my little NUC can handle)

Can its I2S output support DSD256? Check its manual

Before the RPi4 existed I used fancy endpoints like Sonore Rendus

Way better than any other Linux distros (I used all)

You can run HQP OS on the RPi4 if you want and it can run some light PCM upsampling .

Better to have your most powerful machine do the heavy lifting and just use the RPi4 as an endpoint (NAA OS).

Thanks for all the food for thought. I’m pretty excited to try so many of these options.

I checked the manual with the Pi2AES i2s, it is limited to dsd64 due to the RPi i2s connection is limited. But really I am looking for best sound I can get from pcm @192 KHz tbh.

But I will set up an NAA with usb to the topping DAC.

I appreciate your patience. Thanks for your advice