Settings for the most accurate imports

In the Roon options, there is a list of metadata and the user gets the choice of using the metadata of the imported disc or else of allowing Roon to use its own “best guess” as to what that metadata should be. I’ve somehow altered the defaults in this list and woe is me!

Before trying to “tweak” that list, I got accurate metadata almost 90% of the time. On 10% of my imports, I had to manually edit the metadata. But now, I get INACURATE data about 90% of the time, and the results are horrid beyond belief. I get combinations of the following errors almost every time that I add new albums to my collection:

I’m fed up. Either I get this fixed or I stop using Roon. How do I restore the default import options? More importantly, how do I repair the damage already done to my library by this?

This is catastrophic. Please help!

Hmmm, what options are you talking about? Can you share a screenshot?

Where did you get the files that you are importing? My imports have accurate almost 100% of the time. I’m using dBpoweramp with the configuration described here: https://www.dbpoweramp.com/cd-ripper-setup-guide.htm

Hi Mr. Snyder - Thanks for the feedback. I’m using jRiver Media Center 20 for ripping because it’s convenient and because I’m familiar with its options. I rip to an external USB drive that is the media drive for Roon. If I search for the “missing file” from an album, Roon finds it and will play it. So I’m not losing data, but rather Roon isn’t indexing it in the folder where it’s found. 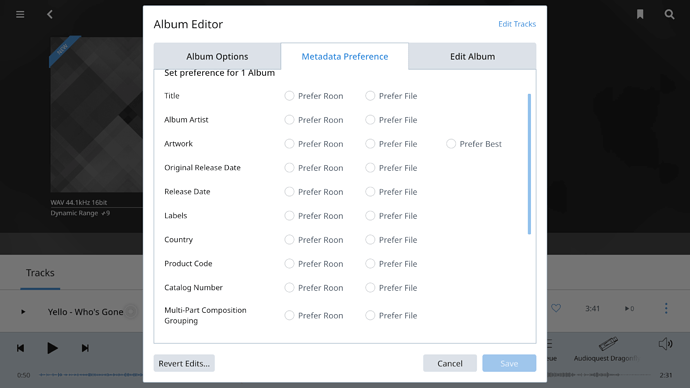 Interesting. So, it sounds like you are running JRiver and the Roon Desktop app on the same computer. That is pretty straightforward and should work well.

What are you doing to search for the “missing file” from an album? When you find a missing file, what do you see when you view File Info and File Tags? Sometimes there’s missing information there, like the ALBUM name, etc.

See this link for details on how to do this:

FAQ: Where can I find additional information about my audio files, like tags,...

You can find more information about a track anywhere in Roon by selecting it (right-click or touch and hold), and pressing View file Info on the selection menu. Here you can see the audio file's information, and you can click on File Tags to view its... 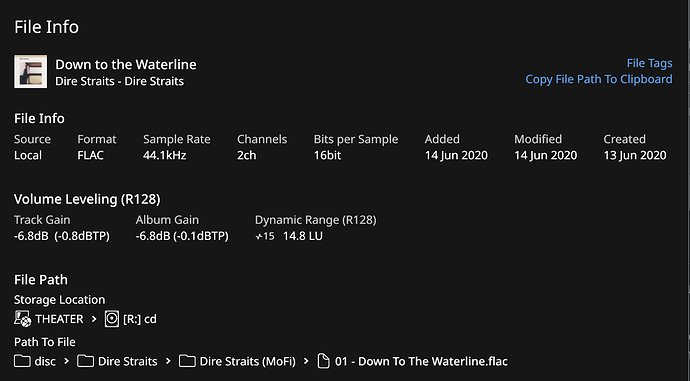 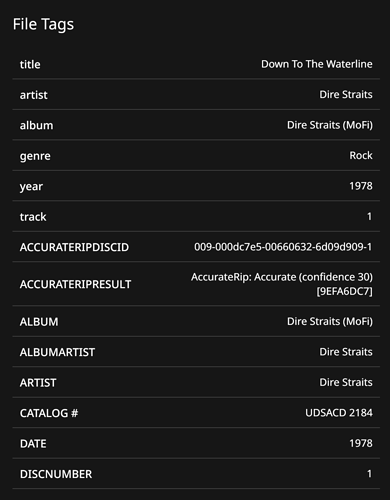 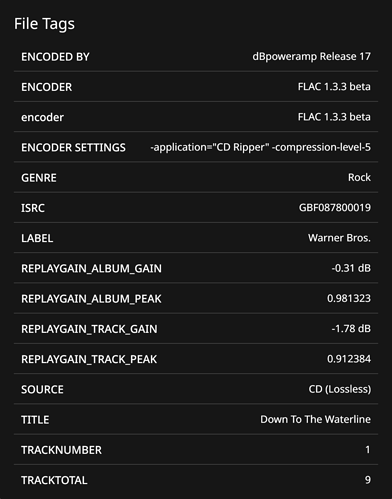 Hello again (and thanks again) Mr. Snyder - I’ve not looked yet at the track metadata. I normally navigate by album. But one of the albums I recently ripped lacked a specific track from the album, and by doing a search, the track WAS on the library drive. I’ll check tomorrow for the same track and open its File Info to see what album the track thinks it belongs to.

When you’re checking, look at both ALBUM and ALBUMARTIST metadata for possible mismatches.