Setup Nucleus with Tidal MQA and SSD files with DSD

I am playing both from 2 GB SSD drive and also Tidal MQA, but I would like to try with some DSD files not sure if there is a big difference compared to MQA. 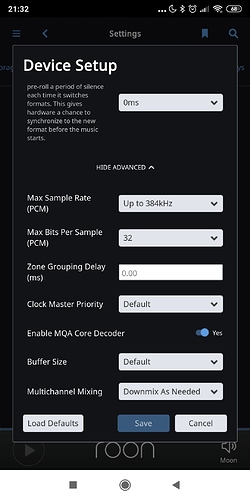 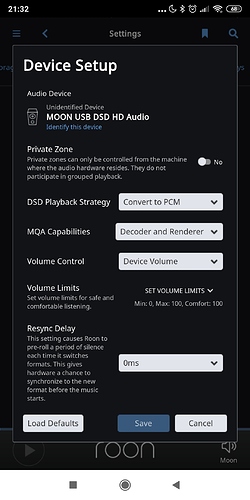 Hi @Robert_Petersen — Your settings look okay here. Are you having any issues playing this content?

If I’m not mistaken, 240i (unlike some other models) does not seem to support MQA. In that case, MQA Capabilities should be set to “No MQA Support”.

Not at all, I simply want to make sure that I am playing with the optimal setup. Since I am using nucleus as DAC (I think? As connected with usb to amplifier

But I am playing MQA without problems? When using usb connection I am using nucleus as DAC? Correct?

The Nucleus does not contain a DAC. Your Moon 240i contains the DAC. As @wklie suggested, however, you should set your MQA capabilities to “No MQA support” as your DAC doesn’t have MQA support. On the other hand, properly set up, you will get the first MQA unfold from Roon. Even though you are playing MQA files, your set-up indicates that Roon doesn’t need to do the first MQA unfold as you’re telling Roon that your device (DAC) will do the MQA processing. Hope that makes sense.

Robert, I believe that you need to update your Nucleus. The current version is 1.6 (Build 416). Isn’t your Nucleus prompting you for an update?

Version 1.0 (build 183) is the version of the Nucleus’ Operating System, while you are referring the the version of Roon. They are 2 different things.

Ah, thanks for correcting me.

Ok, appreciate your help. now I am struggling with if I should buy a MQA DAC in would it be possible to let nucleus send music through USB to a DAC and again to usb port in moon? Or what is the optimal setup?

If at all possible you should try to find a way to audition MQA. Personally, I’m sort of ‘meh’, others are not, but this isn’t the place for that ugly discussion. But if you find yourself squarely in one camp or another, that’s a well-informed way to figure out your path.
You can certainly send a signal to two DACs via USB, but of course both of them need to be close to your Nucleus. You could also consider sending a signal to a DAC via ethernet. You’d need some sort of Roon Bridge to connect ethernet to DAC, but those can be had fairly cheap. That gives you freedom to put the other DAC just about anywhere in your house.