Stunning the number of albums are missed during library scan. All albums in the same file folder, and Roon will simply not acknowledge they are there,

Also with several others like the Doors “LA Woman” and “The Doors” in .aif format would never get acknowledged, despite repeated rescans.

Are they hidden under versions

By default roon hides duplicates of the same album. This can be switched off in settings.

Definitely check Versions as mentioned above!

if you’re still not seeing them, I’d like to point out some documentation we have that may be helpful here. In our KB we have an article about Skipped Files and an article about why some files might be missing from Roon .

I have several copies of some of this material like ripped from LP with mind numbing expensive turntables and A/D converters. (a friend’s professional Set-up - costs more than my truck), SACD rips to DSD64 as DSF files, and FLAC downloads.

Some of the LP’s are multiple copies of different pressings and all of them show up.

Edit: The duplicates I have are ripped from Vinyl and have an extended file name stating the pressing in FLAC. Zero duplicates of the DSF/DSD files or AIF. Show duplicates is also turned on in Roon. 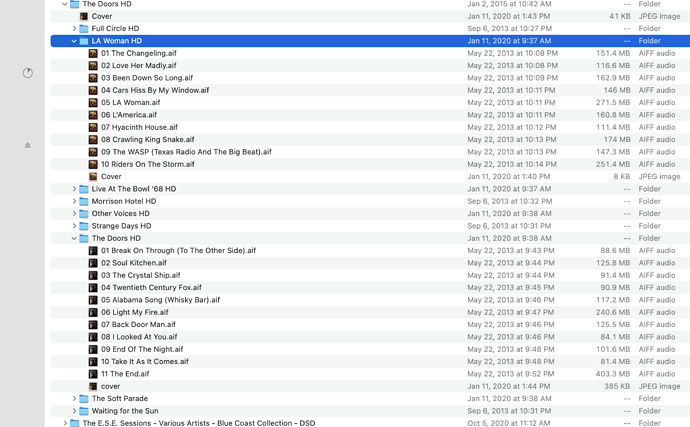 All the missing files are now present. Later I’ll selectively add the remaining ripped FLAC LP’s and see what happens.

Roon clearly thinks these original digital versions were duplicates, BUT did not show them as dups in the dups list or exposed them when Settings for show dups was turned on. Strange.

Could it be because your folder names are “wrong”, “The Doors HD” and not “The Doors”? Usually the Folder Structure matters, The Doors is a band name, The Doors HD is not. The same would go for the album names, Just a guess.