Should I be able to globally change the "original release date" on shift selected items? [Fixed in latest build] 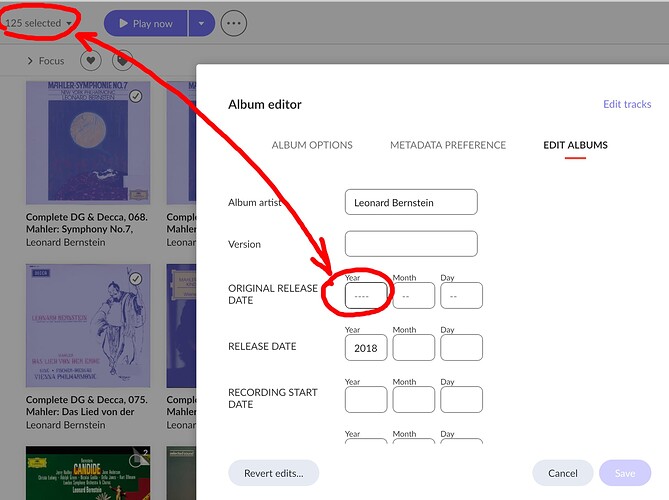 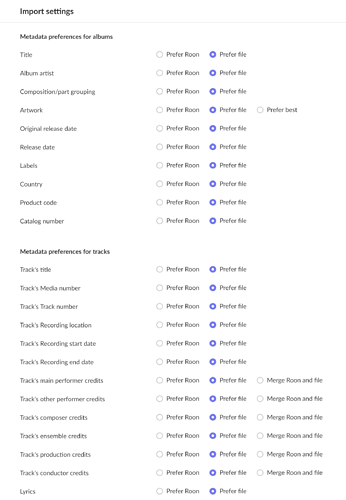 Hi all. Just a quick one.

I have my prefs set to follow “original release date”, but Roon doesn’t seem to recognise the date that I put into Yate. Which is no surprise, of course, but it’s never been a huge big deal because I’ve always been able to go into an album & manually enter the date.

But more than that, I’m 99.9% sure that in the past I’ve shift selected, say, a box set of albums & given them an “original release date” of when the box set was released.

Now I can’t seem to do that.

So am I completely mis-remembering that I was ever able to do that or has something changed?

I can certainly understand that it might be considered risky to be able to change the date on a large number of albums, as this isn’t often what’s required & it could really mess things up (so maybe some kind of “do you really want to do this” warning dialogue might be in order), but I’m really not relishing the idea of manually changing the dates individually on a 121 album box set.

Well for me, box sets show up as one cover art in Roon like this: 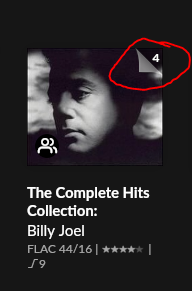 So when I select that it goes to a view that lets me edit the entire thing or look at individual albums: 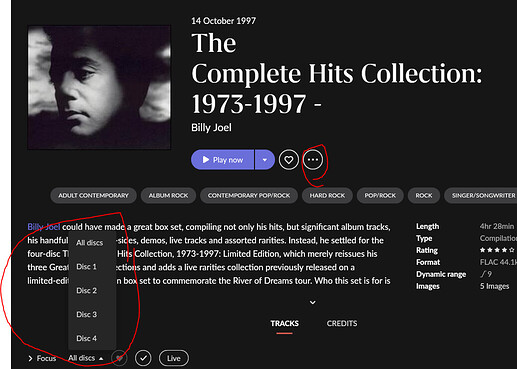 Is this not how you are seeing them? It may be that your “box sets” are not being collected into a set by Roon?

Edit: I tried editing multiple albums at the same time and it will not let me edit the field you circled.

Second edit: Looking more into it some of my box sets (like Led Zeppelin ten disk set) so up as individual albums. Not sure what to think about that, other than it is good to be able to see all the album art instead of just what the box set art was…??

I deliberately organise my box sets so that they don’t show as a single entry. I don’t want them like that. In this set, I have 121 unique album covers & I like to see them side by side. It looks great.

(Mind you, knowing me I’ll change my mind at some point & re-organise!

But basically, I think I have the brain fog again & I’m remembering doing something that it’s not possible to do.

When I get to my next smaller box set, I might have a play with doing it your way, but I’ve read so many horror stories about how badly Roon handles box sets that I’ve avoided it so far.

Tell me something, instead of “disc 1” etc. can you name the discs?

If not, how on earth would you be able to decide which of these you’d like to listen to next?

I would love it if I could have a “box set” image in the main directory & if I click on it, it would take me through to all of the album covers laid out as in the above screen shot!

Tell me something, instead of “disc 1” etc. can you name the discs?

If not, how on earth would you be able to decide which of these you’d like to listen to next?

No you can’t rename the discs.

Personally, I don’t think about the disc numbers. I use Focus on a box set to decide what I want to hear.

Yes, but if you have 111 disc Deutsche Grammophon set where every disc is random & varied example from the DG catalogue, “focussing on the box set” doesn’t quite cut it.

Does choosing from those 111 then become a matter of scrolling through a list of tracks?

Genuinely curious, because everyone has their own way of doing this.

Does choosing from those 111 then become a matter of scrolling through a list of tracks?

No, of course not (for me, at least). That would be extremely tiresome. Focus in a box set gives me the ability to focus on composers, performers, and/or compositions within the set. I can use the lists given in each criteria to decide what I want to hear pretty quickly…

Focus used in this way can also throw up some interesting things. For example, on this box set of the complete works by Debussy, I discover that he transcribed some of Tchaikovsky’s works for piano… 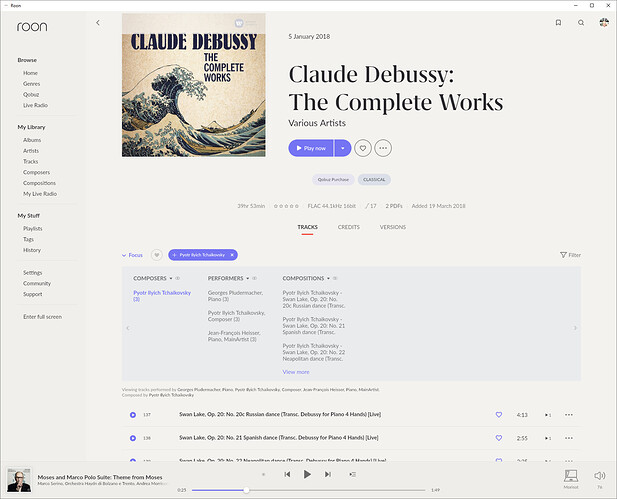 Meanwhile, with regard to the original question, I assume the answer is “No, you’ve been imagining things again!”

I was just thinking can you use a TAG or bookmarks to do what you wanted to do? the tag would be maybe, “111 years of Deutsche XX-XX-XXX”?

Thanks for the suggestion.

So, just to clarify…

I really dislike fiddling around in various sort & search modes.

To me, one is like flicking through records in a record shop & the other is like thumbing your way through some pages on a clipboard, like a factory manager.

For classical box sets, I use “album artist” for the name of the artist or label to whom the box set is devoted. Let’s say “111 Years Of DG”. This sorts them all into one place.

Roon then looks at the date, which is a total pain in the butt because I then have to have the same date on every album in the set in order for Roon to move on to looking at the album title, where I can number them.

That way, they sort in the correct order, thus:

Even if I used a tag, I would still need to number the albums to get them to sort in order.

(I started off by numbering them in the album artist field, which would mean that I could leave all the various release dates as they are, but then every single album artist entry becomes a separate artist & makes the “artists” list un-usable, so I gave up on that.)

If I could choose the sort order, something like this, say: 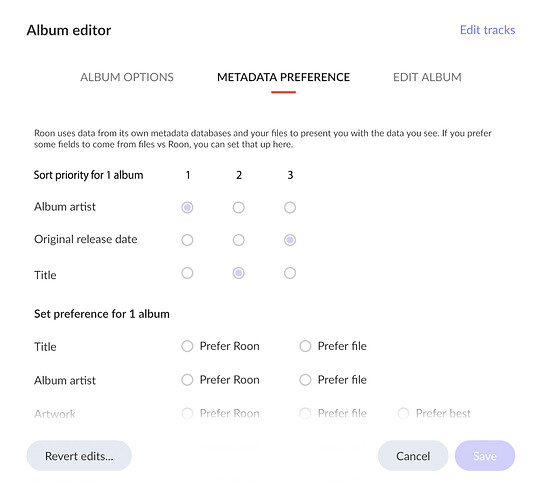 Then, when needed, I could leave the release dates as they are & the albums would sort in the correct order, but as I’m not using Roon the way it’s supposed to be used, it seems unlikely that they’ll add in a bunch of functionality just for me.

Thanks for the report. You should be able to edit the original release date for multiple albums in the way you’re attempting. I’ve spoken with QA and this appears to be an unintended regression caused by changes in the most recent build. We’re putting in a ticket to get this corrected.

Perfect, thanks mate. Glad to know I’m not losing it completely!

Hey @Snowdog and other chaps,

I just wanted to update you that a fix for this was included in our latest build. We appreciate your patience and apologize for the wait.

Yes, mate, thanks. I noticed that & have been making good use of it already.

Excellent, thanks for the update! Keep well, my friend!