Show me what I *DON'T* have

Hello - this is my first post here - I’m currently in the trial phase for Roon. I’ve done some digging and not found this topic, though I just know now I’ve said that someone will correct me. Forgive me if it’s been asked before…

One of my favourite artists is ‘Boards of Canada’. I own two of their albums. Tidal has a very limited selection for this artist. With the metadata Roon has access to it would be awesome to be able to see a ‘also by this artist’ listing, showing me the albums I don’t have in my library, nor accessible via whatever online service I’m using. This could also make Roon some money in affiliate links, by giving me the option to purchase a download from an online service.

Hopefully that makes sense. Oh, and if you enjoy instrumental electronic music then please try ‘Music has the right to children’ by this artist. 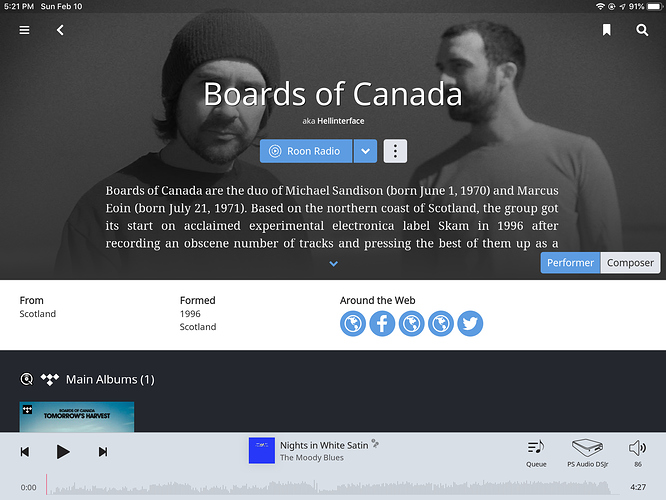 Not much there in Tidal or Qobuz to draw from. Possible that once Qobuz goes full live more albums will be available. Roon will list the albums you don’t have, but only as Tidal or Qobuz lists them in their catalog. 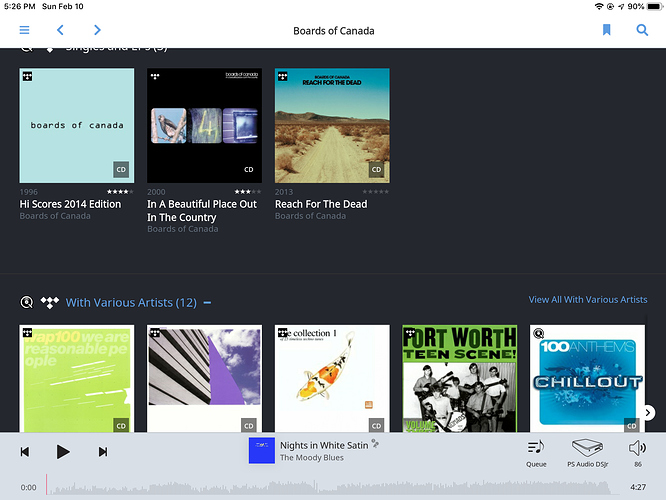 Strange, I see 7 albums listed in Tidal for Boards of Canada. Roon separates these into 5 LPs and 2 EPs which is about right really - I don’t think they have any further main releases.

If you are a fan of Boards of Canada, you may want to check out these too:

All of above listed albums are on Tidal…

I would also strongly recommend Biosphere, who strangely has very few albums on Tidal, but whose complete collection is on Bandcamp (https://biosphere.bandcamp.com/)
Notable albums: Substrata (one of the best ambient albums ever recorded), Patashnik, Microgravity, Cirque, Dropsonde

Now I am curious…

Via the Tidal web site, I only see 2 BoC albums, and 3 singles… I am in the US - are you in another region? 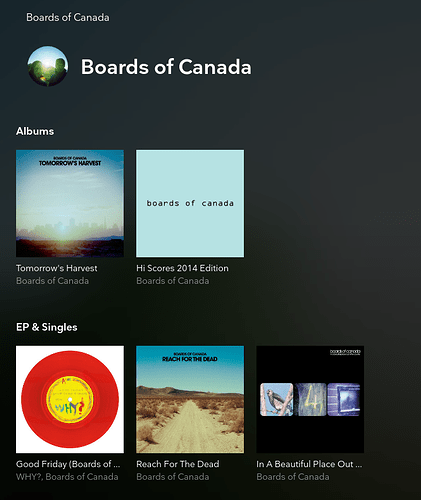 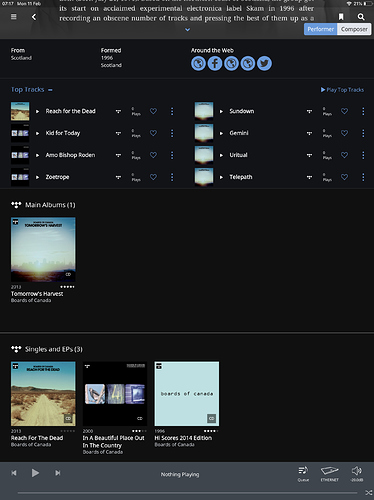 In the UK and this is all I get

I’m in Aus. Here’s what I see (plus there is one more album off to the right, Tooism). Maybe it’s a regional licencing thing but more likely it’s a mistake on Tidal’s end. Pity there’s almost no way to contac them as far as I can tell, for this sort of thing at least.
Although I have no interest in Qobuz (too expensive for this student!) at least they have a rep present here on the forums. 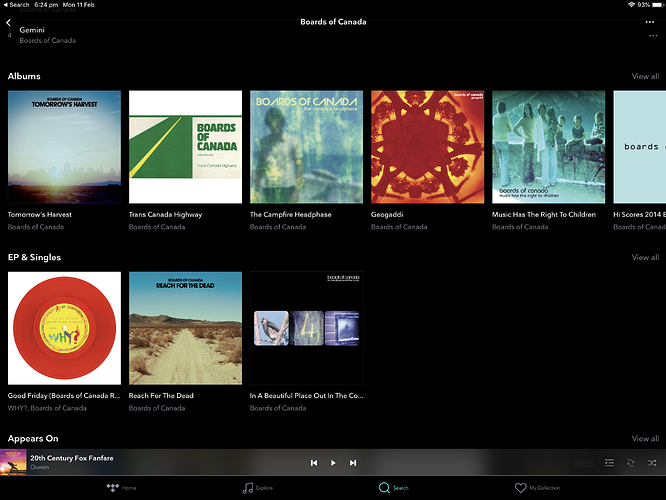 Thanks for the replies and tips!

I’ve been reminded how important it is to word forum posts carefully. The BoC thing was only intended as an example, but ended up taking over.

My main point (given we’re in the Feature Requests area here), was to request that Roon considers showing other works by an artist by leveraging its databases, so that I could see everything else by an artist (their full discography), even if they’re not in my own library or on a streaming service I’m subscribed to. This doesn’t seem to be how Roon works today.

The point made by listings from 3 different regions here is that the feature you are requesting is already implemented, but is limited by the catalog that is available to you from Tidal/Qobuz.

I understand that you would like to see the full discography for an artist, but Roon is first and foremost a music player with an enriched library. From a music player perspective, there is limited value in showing you an album that Roon does not have a play back source for.

A full discography is usually just a few clicks away in the weblinks on the artist page.