Show us you RPis!

Curious how others are rocking with their RPis

A short spec of RPi model/ram, OS, HAT, DAC and case. And why the RPi?

Small, light and bang for buck performs better to my ears than a lot more expensive alternatives.

4 pis in use two are embedded in speakers with Hifiberry Amp2 boards running Roopie to make wireless Roon speakers one mono and a stereo pair. One pi in flirc case as my bedroom headphone setup again running Ropiee to a SMSL SU9 DAC and Schitt Heresy Headamp. One more acts as a remote to the stereo speakers previously mentioned in my home office.

I use two RPi4’s, both running RoPieeeXL and both in Flirc cases. One is at home for headphone use connected by ethernet with USB out to Meridian Prime and Mojo 2. 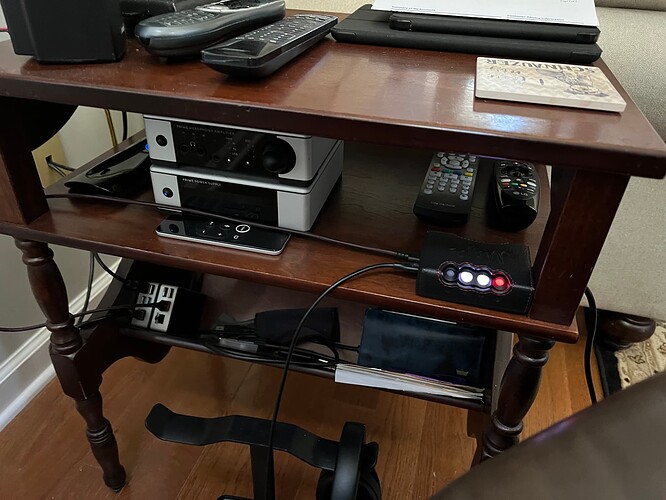 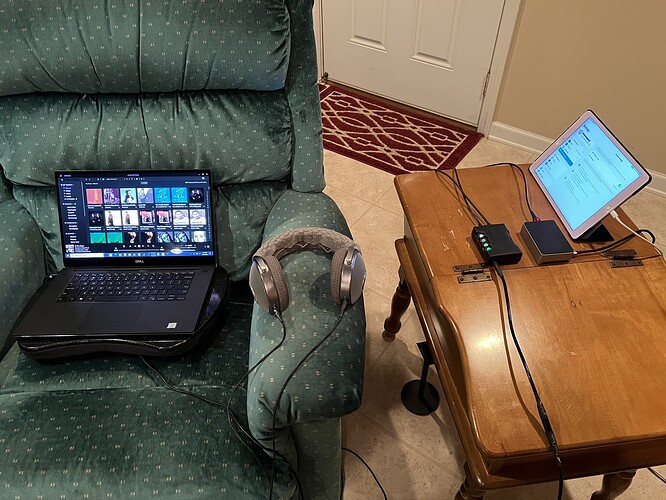 These are (most) of mine.

Six Ropieee endpoints with a mixture of hats (Pi2AES, 3x DAC2HDs one with AAMP60, DigiOne, Katana).

I have a couple more Ropieees elsewhere (another DAC2HD and another DigiOne).

And the Pi2AES runs my main HiFi system via an RME ADI2 PRO.

^ this explains the pi shortage!

I made a walnut house for my Pi + Pi2AES. I’ve since bored a hole in the top for airflow (protected by a nice brass screen). 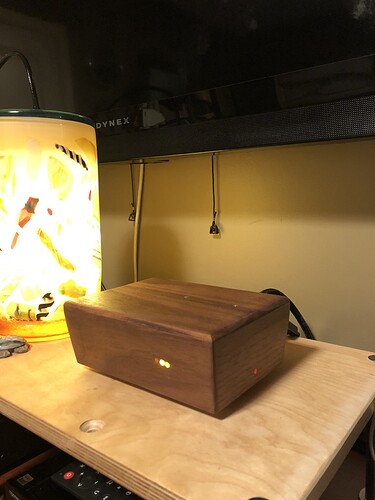 I’ve got 3 Rpi 4, two running as NAA for HQP in simple aluminum cases. One in a Pi 2AES

So it’s you that ate all the Rpis.

I was lucky enough to have bought them way back before they were in short supply.

I even bought a couple (with hats) on the sales forum here!

A great shame they are now so hard to buy, they are so good as roon endpoints!

A great shame they are now so hard to buy, they are so good as roon endpoints!

I am on pilocator.com on the daily trying to get a couple more because I’m not paying $200. Dang it! 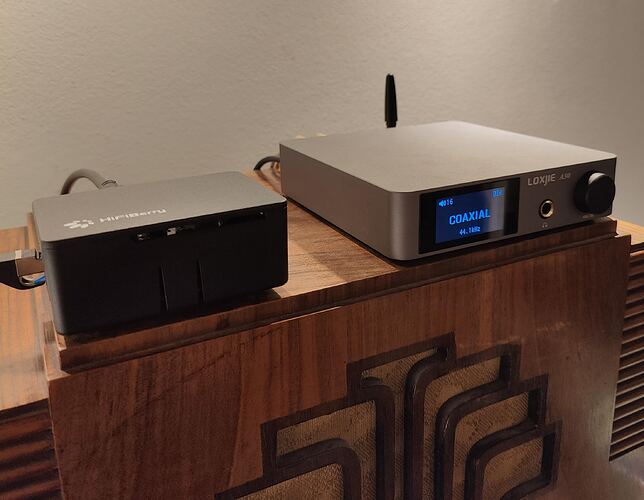 I got into Roon through the Pi rather than the other way round- I had five Pis running PiCorePlayer, one for LMS and the others Squeezelite. Just got in before shortages hit… It was fun setting up and tweaking, and it worked pretty well, and there was no way I was ever going to fork out for Roon. And then I trialled it with ROCK on an old, unsupported NUC I had, and before long I’d ordered a supported NUC and stumped up for Lifetime.

I suspect a lot of Roon users don’t care about how good Roon is for people who like to tinker with this stuff, but I’d never have gone near it otherwise, and I’m so glad I did… 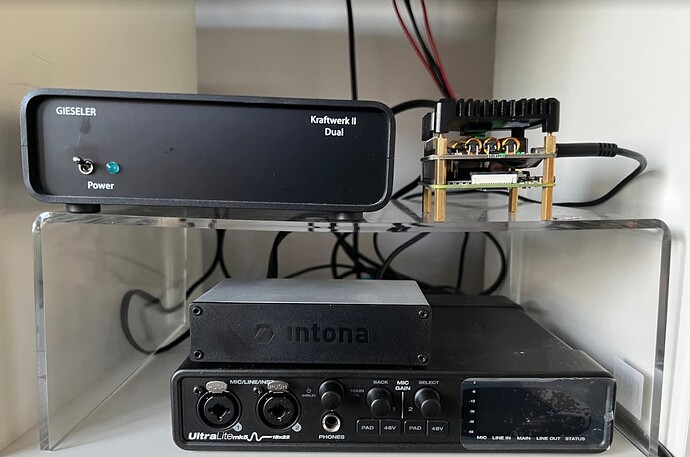 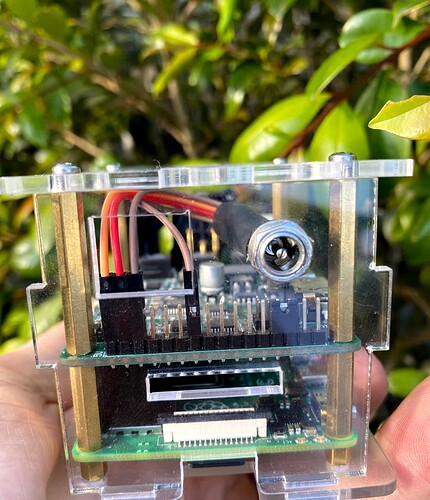 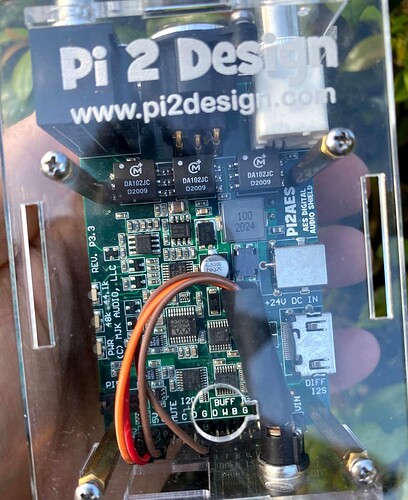 Just set up my first Pi yesterday for my home working set up, the main reason was to get around infuriating audio glitches with my M1 MacBook Pro 16.

I’m using a Pi 4 8GB as that was pretty much all I could get at a reasonable price. Running RoPieeeXL and feeding a Schiit MODI 3e & MAGNI 3 Heresy stack and a pair of Campfire Cascades. Case is an Akasa Maze from Amazon UK. Connected via Ethernet and running with a Nuc10 ROCK. Tempted to add an iPad mini for a control/display but desk is getting a bit crowded! 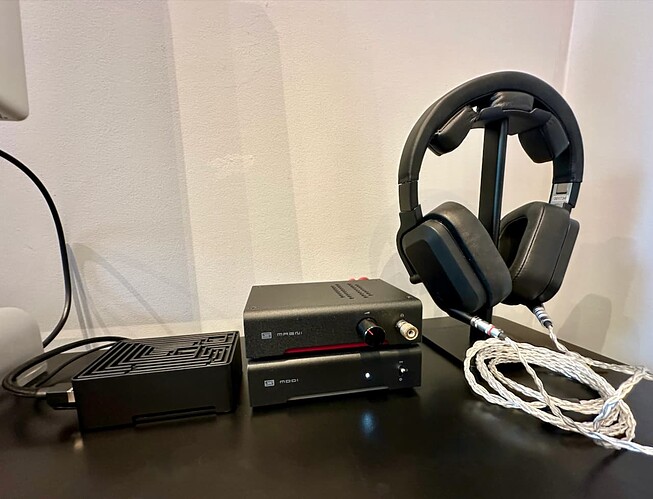 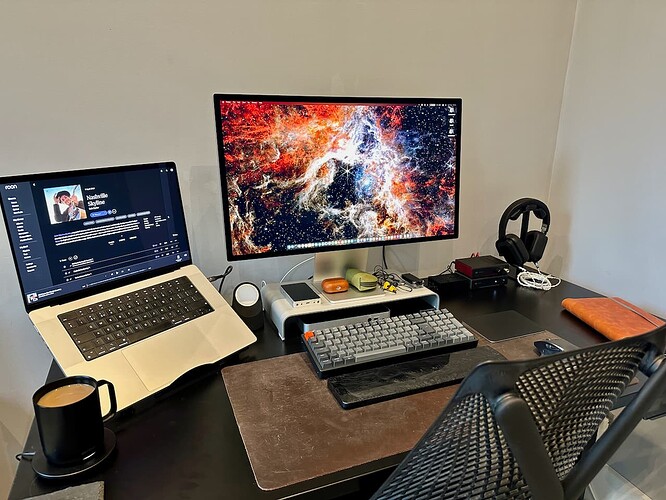 With a 5vdc bypass modification.

What does this do?

I’m just powering mine in whatever basic way seemed the most logical, and it works fine. (I think the Pi powers the Pi2AES. Or is it the other way around?

Is there a sonic advantage to doing power modifications?

Couple of Pi’s in the house.

Multimedia room
Odroid C2 connected by USB to a Topping DX7 Pro DAC/Headphone Amplifier with a Hifiman Deva
(OK, not a Pi, because they are so hard come by and I had the Odroid lying around. But it is a Pi case.

Garage
Pi 2B in an old Internet radio. None of the buttons are working by the way…

Pi 4B
And a Pi 4B in the hall closet that runs Home Assistant and PiHole.

It allows 5vdc supplies to be used, rather than 24vdc supplies.
Much easier/cheaper to buy a quality 5vdc v’s 24vdc. 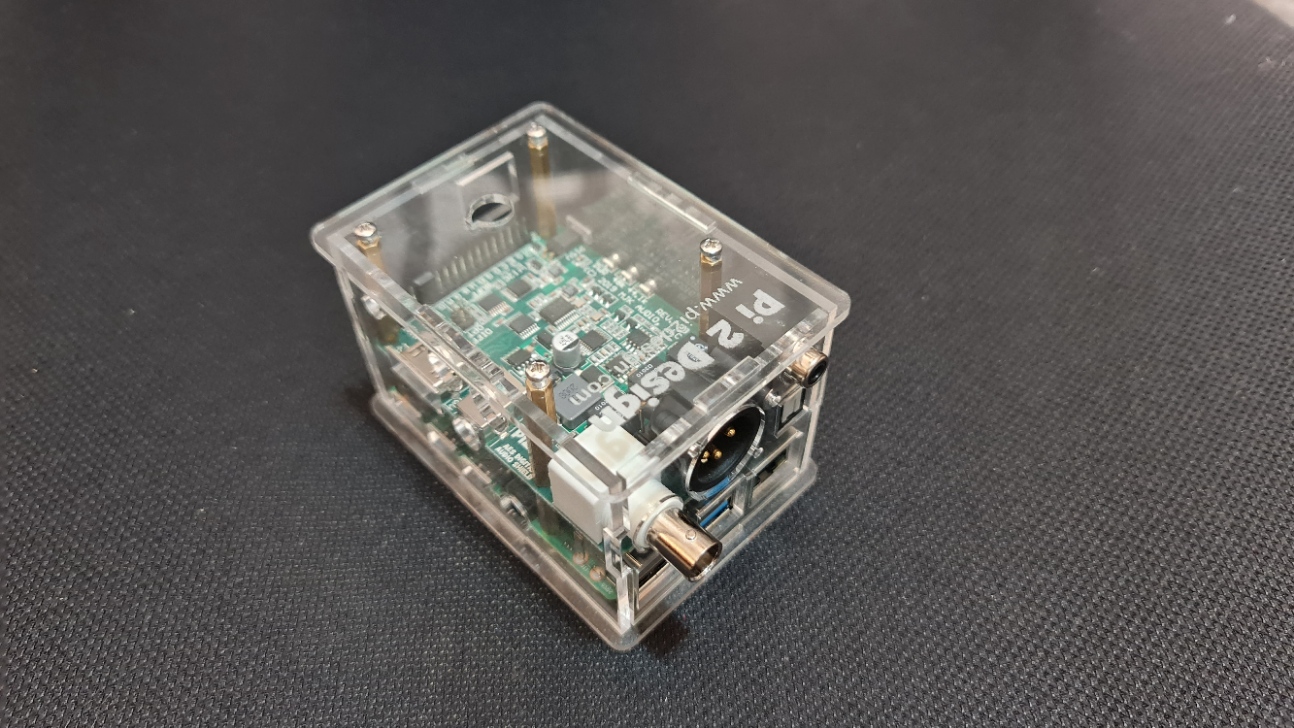 Measurements of the Pi2Design Pi2AES and a quick guide on how to use a 5v PSU with it.

“Unfortunately doing this mod violates the warranty and more importantly, bypasses the protection circuitry at the 24V input. Any voltage spikes, ESD, etc will pass into the device and the Pi.” 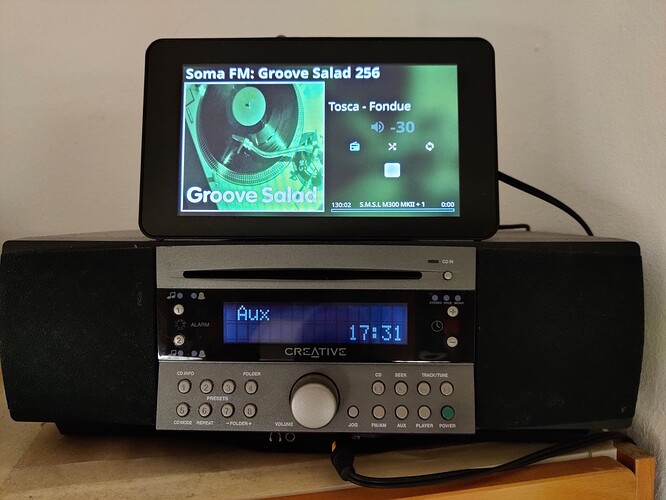 Much easier/cheaper to buy a quality 5vdc v’s 24vdc.

Ok, yeah, all my Pi’s/HATs already have power supplies, so I’ve never had to worry about this.

I thought if there was some performance benefit, I’d look into it

I am sure there are waaaaaay better streamers out there than the Pi/Pi2AES combo, but you’re going to spend a heck of a lot more to get there. For the vast majority of us Roon users, I think this is a solid endgame streamer choice. (If you can find the components, anyway!)

Using an old computer UPS that I removed the insides and used it only as a steel box, I installed a Raspberry Pi, a HiFI Berry DAC Pro, a DC power supply and a bare bones Sure 200W circuit board power amp from Parts Express. I mount it under the roof eaves and brought a volume control and a preamp selector down to eye level. I installed a super quiet cooling fan from Noctua that is connected to a thermal switch on the power supply steel case. Polk audio outdoor speakers in the corners of the deck. 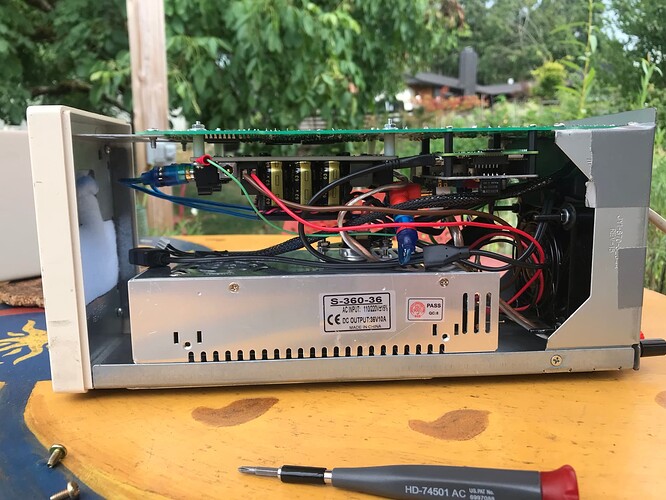 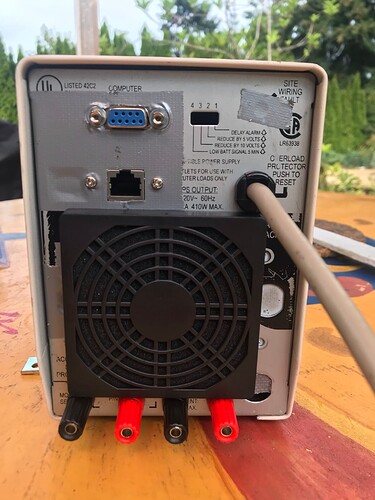 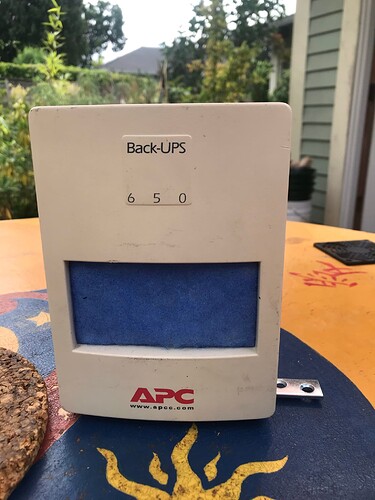 I thought if there was some performance benefit, I’d look into it

I found a benefit 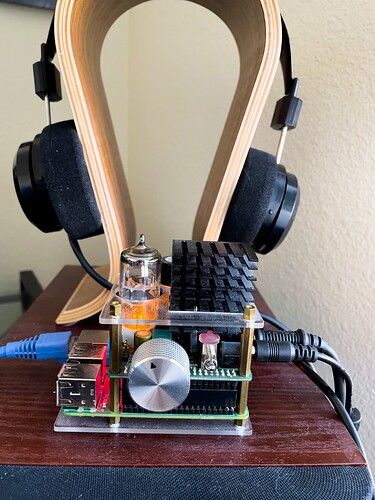