I was just looking at a bunch of early MIJ axes on Reverb and quite a few Kay models but did not see one that early production.
Good job I won an eBay auction for a 12 string…it was a fair bit cheaper than any I have in my Reverb watchlist

I don’t know much about electronics…but I do have a multi meter. I’ve been reading up on Kay a bit. Seems like there is some love for the “pancake” pickups like mine has. I’d be curious to know how to hook up the meter to get the proper reading without messing it up in the process.

Anyone know how to tell me where to put red and black (not roulette) and what to set the multi-meter to? You can see my pickup above only has one wire while this one one ebay has two.

Kay Pancake Pickupfrom the Sixties. The lead wire has the original.

Cool to know the pickup’s asking price is more than I figured the entire guitar was worth back when it was gifted to me. Honestly I figured it was dumpster fodder. Can’t wait to get it all back together and see how she sounds.

Zooming in it looks like it’s two wires( really has to or it would never work…lol)
One goes off to a pot directly from looks of it.
I’m not sure if you could accurately measure the resistance though with it hooked up " in circuit" .

I see that now…think you are right about two. Funny because I was thinking it needed two to make a circuit but figured I new less about guitar internals then I did electricity.

The volume and tone pots are pretty scratchy/noisy when I turn them. Can that be cleaned with something like deoxit or should I leave well enough alone and take it to a qualified repair shop? It looks so simple under the hood, and it was free I kind of want to dig into it and see what I can do. I’m guessing it’s kind of like speaker crossovers and that 50 plus year old red thing; resistor, capacitor, whatchamacallit sould be replaced.

Thinking if I was really motivated I could just buy one of everything that’s there. Two pots, the quarter inch Jack, some wire, whatever that red thing is and make my own using the existing one as a guide. What you think?

I think thats a sound idea, sorry about the pun.
I would do exactly that, you have the wiring layout to copy so should be relatively easy.
Two pots, the 1/4"jack, some decent wire and as long as you can read the specs on the red cap and get something very similar if not identical I think it would be the way to go

I can’t believe how tiny this rig is and in turn how big the sound can be. $20 bill for scale. BTW, had to go with orange not black cabinet 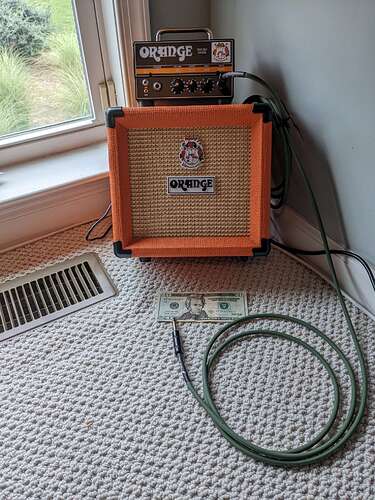 I had been looking at getting a 12 string but did not want an acoustic and a lot of the electrics were priced way higher than I wanted to pay until I saw this.
Yes its ChiFi but reviews are its actually a pretty decent axe for the money just right for a bit of neck and fret fettling.
And I would have to agree, its got a good heft to it and without touching it the play action is pretty decent.
For the price I can afford to spend a few dollars on it if I want to or just leave as is. 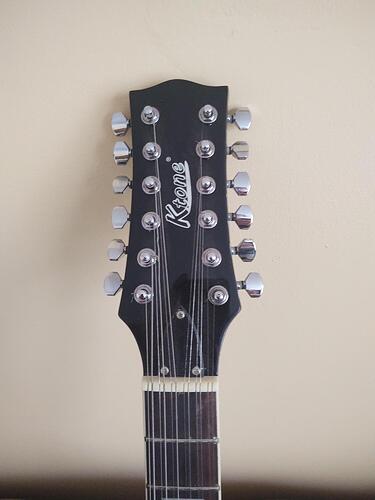 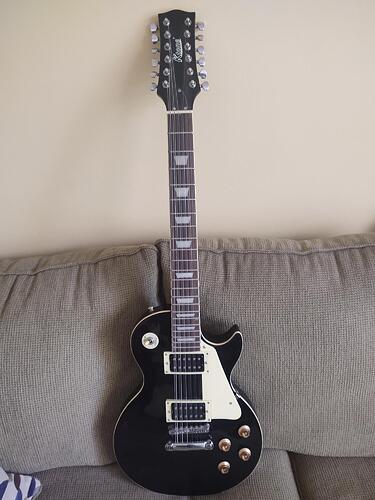 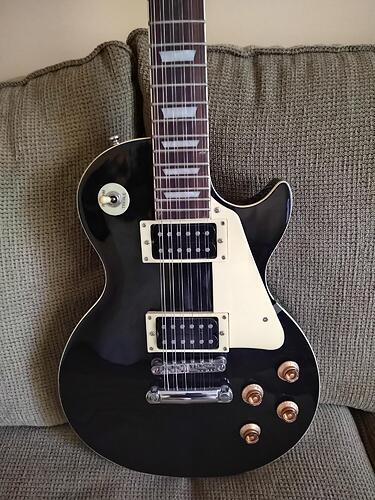 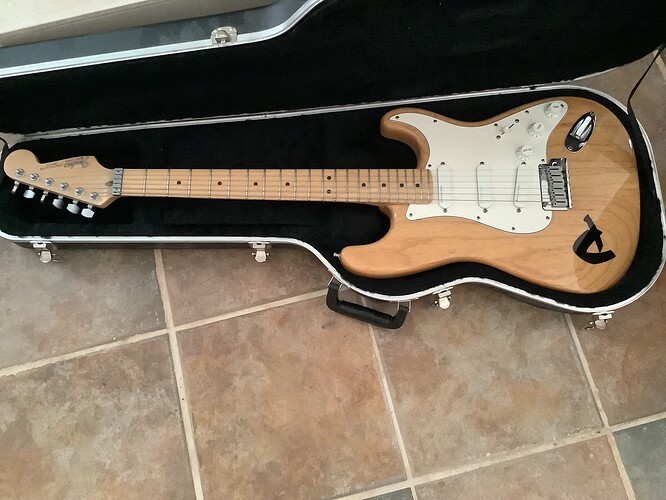 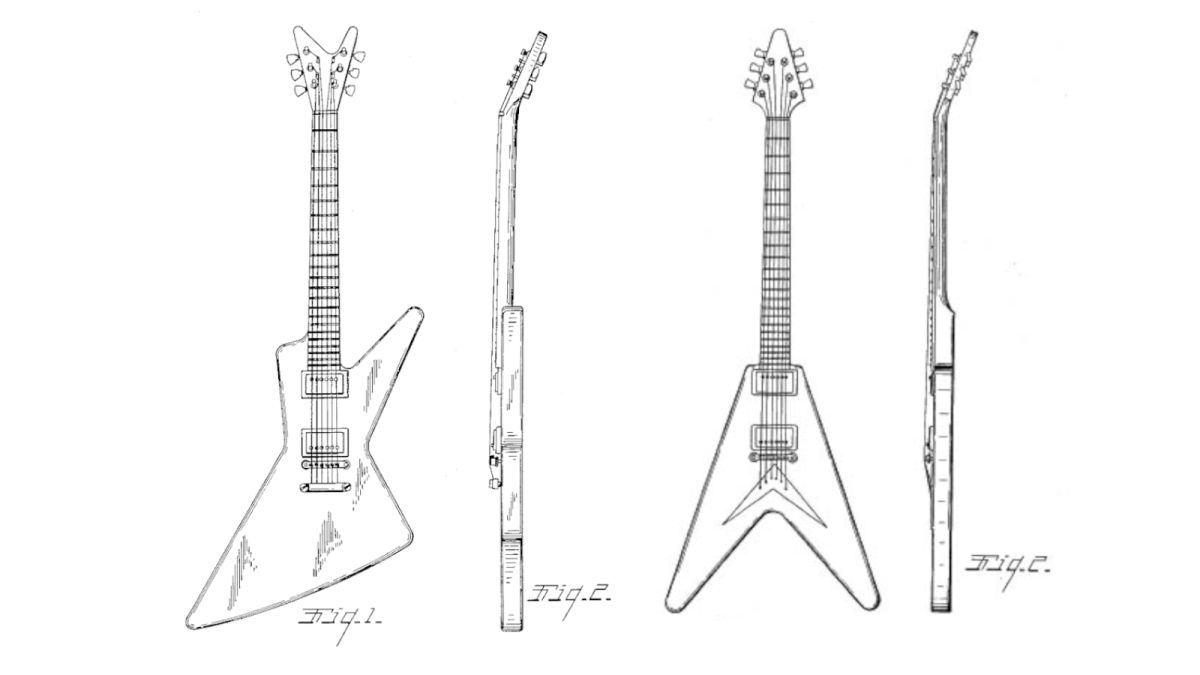 Just dug this one out of the vault (basement music room) a couple of weeks ago. It’s the guitar I’ve currently owned the longest. My wife bought it for me before she was my wife.

I just got it back from the shop where it got new strings, a full setup, some humidity work and minor bridge repair. I think the repair costs were more than the guitar is actually worth, though to me it’s priceless.

Plays better than when new. I think it’s a 1986 or 1987 model. Washburn D12. The spruce top has aged nicely. It used to be a lot lighter now it has almost a cherry tint to it. 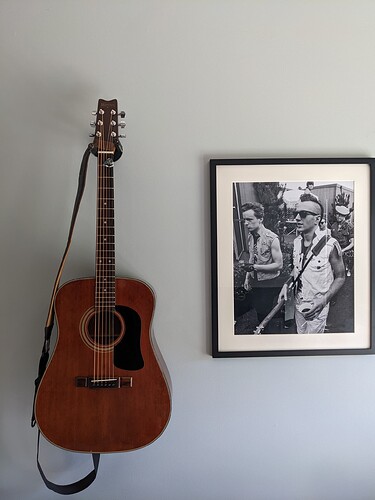 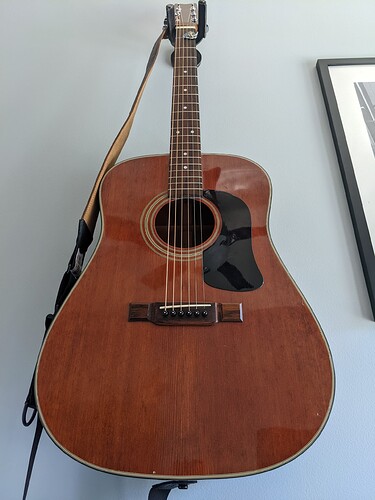 Fender and Guitar Center have now had significant lay-offs. They overbuilt/ordered during the virus shut down and have been left with a lot of inventory. Likely great deals abound.

You are correct, my local Guitar Center has some good deals on Squier…did not see much on actual Fender though.
Probably a good thing…for my wallet

I would imagine that your wife would think even a Fender Custom Shop Strat is far less expensive than your credit card bills for your OnlyFans visits, but I clearly cannot say for certain.

In either case, it is hard to lose money on a good guitar. My daughter’s guitar (above) was bought new from Washington Music Center in 2004 for about $495 as I recall.

A question if I may…

I am thinking of buying a PRS.
I know you already own a number.
Is there a “best” year or model for quality and playability?

Obviously a USA made one I assume but any guidance would be appreciated.
Thank you!

The Best Buy for quality and tone among the PRS line(s) is the:

Silver Sky SE model. $849 and available in four colors (derived from automotive paint colors) from Sweetwater or Amazon. More available than it was 2 years ago. I likely will buy one although none of the current colors blow me away.

This is a Strat-style guitar, and it is seen much improved over the Fender Strat.

The SE model is based upon the “John Mayer PRS Silver Sky” (a Core model) which can run between $2495 and $3495 and higher, dependent upon rather striking colors. Also the USA model has locking tuners, different neck profile, and minor(ly) different pickups.

It is rather universally felt that the SE is as good. for many dollars less. Fit and finish are excellent. Many bands use the Silver Sky SE. One female guitarist of note has an original Silver Sky, then bought an SE version two years later and is almost embarrassed by how they are so similar, and she likes the neck profile on the SE better.

The main differences between PRS SE and the Core lines are that SEs are built with affordable components in Indonesia and Korea.

The differences between the SE and the USA model are, therefore, very, very minor.

When you get into the Core models (US made) the prices can be very, very high. Private Stock can run as high as $20k+. Wood library core models can run in the $5k-10k range. Santana plays a Core (his signature) model, but they also make an SE variant that is “just as good.” The Core models can be amazing works of technology and art. Many artists use the Core models.

Side by side, I doubt most can “see or hear” a difference between a Core model and its SE counterpart. Paul Reed Smith really has hit it out of the park. He is an extremely quirky fellow but an excellent designer, artist and very good musician.

(I can expand at your request)

(If you want to invest, then you find a 1985 or 1986 original PRS. The PRS website not only lists the models but also the artists that play them and artists they are bringing to prominence. In contrast to Gibson’s documented quality control issues and Fender being entrenched in bureaucracy (which is why John Mayer switched from Fender to PRS), Paul was a player, guitar tech for Washington Music and then borrowed $20k to start his own company. An American success story.)

Wow!
Thank you so much for such a detailed and thought provoking reply.
I had possibly wrongly assumed that the USA built ones would be quite superior to the IndoKorean ones.
More homework is required!

The SE are excellent instruments. PRS himself is very sensitive as to how his company is seen. He cannot risk an Asian copy that is somehow denigrated by musicians.

When an accomplished musician cannot hear the difference between a Santana SE, McCarty SE, the Paul’s SE, Silver Sky SE etc and its American Core counterpart, it is quite a statement as to what PRS is doing. Funny he cannot stand a model named after him.

Bear in mind that models and even colors are chosen by him. He decides how pickups are wound. He is a pedal fanatic as well.

Here’s a thing: The core models, of course, are often in rare woods, and use very thin coating that…will fade in the sun. Some feel this adds to their appeal…Whale blue looks like faded blue jeans if hung near a sunny window.

My guitars, quite unintentionally, are in the windowless and pitch black home theater and that was solely so the kids could grow up seeing them.

If you get or consider an SE, please let me know your favorite color. My wife likes the blue (recent release; there were originally only three colors), but I wish they made another color(s).

Here’s a fun thing…some have bought them, stripped them, painted them classic Fender colors and then aged them (Relic’d) to make them really look played.

Seems a fun and inexpensive project.

The SE models will be getting a serious reexamination now.
Funny enough though I do have an original 86 in Pearl white in my Reverb watchlist…
Obviously a lot more money but I thought reasonable for the year.
Torn between potential investment and just fun playing with great looks.
And yes I love the Whale Blue and the Trampas Green finishes.