They’re about 18 inches thick nearly everywhere, except for the non-rectangular corners at the front wall. That’s where the bass traps are hidden. There the additional acoustic walls are about 28 inches thick.

The absorbers and diffusers are all custom-made. Unfortunately, the company that planned, built and installed them doesn’t exist anymore, because their boss (and most competent acoustics engineer) died a couple of years ago. The company was called “wvier” (from Lemgo, Germany). They were involved in projects all over Europe. Among other things, they built the listening rooms for “Audionet” and “Marantz”. In my case, it took them three weeks (!) to install everything (with at least 4 people working 6 days a week from early morning until late in the evening). The only acoustic treatments you really see in my photos are the diffusers. The rest is hidden in the walls and ceiling. I could’ve bought similar diffusers from one of the many suppliers on the market. The reason I didn’t was that it would’ve been a lot more expensive. If you check out what the “usual suspects” charge you for a single diffusion panel, you can probably imagine what it would’ve cost me to buy about a eighty of them…

Wow!!! Congratulations on your MBL X-treme speakers.
Here’s a little anecdote (true story!) that you might find interesting…
About six years ago I had the chance to hear the X-treme speakers during an extended private listening session at the MBL showroom in Berlin, Germany. I really believe they’re among the finest loudspeakers in the world!!! In the MBL listening room, however, the bass sometimes seemed a little bloated and slow. The then sales manager told me this issue was definitely room-related and that he was terribly disappointed with the company responsible for the acoustic tuning of their showroom. He kept emphasizing how much money they’d spent on the improvement of the acoustics there. What he didn’t know was that I had hired the same company (“wvier” from Lemgo, Germany) the year before - for my own listening room (see my posts in this thread). So I knew why the acoustics in the MBL showroom weren’t entirely satisfactory at the time, because during the planning phase of my own project the “wvier” acoustics engineer had told me about half a dozen times how extremely frustrated he was by the fact that a top-notch Hifi manufacturer like MBL had insisted on what he considered an embarrassingly “cheap” and “low budget” solution…

To cut a long story short, a Stradivarius stays a Stradivarius no matter where you play it. It’s the same with your MBL speakers! However, the acoustics of your listening room always play an important role, too.

You have enough room there to host a ‘House Concert’ then you can compare the quality of Live sound in the room to recordings. Real Music in real space lol… looks amazing from here…

I first heard the Xtremes at their debut at the Las Vegas CES . They were shown in one of the large conference rooms and were almost unlistenable . They’ve been shown at CES a couple of times since then and sounded superb .

I spent a great deal effort on room treatment for my previous system , Martin Logan Statements , and found substituting the Xtremes produced a problematical bass response . Not terrible but it became progressively annoying over time and I kept diddling with the Xtremes controls and I experimented with various software/hardware solutions .

Room design/acoustic treatment is not the place to cut your audio budget .

When you hear what can be accomplished with meticulous room design , e.g. , Capitol Records Sound Room 1 , it is revelatory .

Yeah, Jürgen Reis is a really nice guy, and he definitely knows his stuff. Have you ever been to Berlin? Do you know the MBL showroom? Do you happen to know my speakers?

No , I haven’t even visited Germany although I keep planning on going to the Munich Audio Show but something always seems to come up .

I haven’t heard anything from BM . Do they have a U.S. distributor ?

Your sound room looks great . Next time my wife complains about something I want to do , I’m going to show her your room . Only kidding . I have several rooms that are mine to play with but I’ve never tried anything as ambitious as what you have . With the Xtremes ( and maybe all omni-directional speakers ) , it is usually the side walls that are a challenge . Heavy drapes , diffusers and some ceiling corner treatment has worked well .

Wow, The NS1000M!! I still have the pair I bought in the mid 80s in storage. Did you modify yours or are they stock standard?

No, they don’t have a U.S. distributor. That’s why I asked if you had any connections to Germany. B&M is the German market leader in the high-end segment of active loudspeakers and quite well-known in a number of European countries, but I don’t think they’re likely to have more than a handful of customers in the U.S. (if any at all). Bad luck for you guys on the other side of the big pond… — only kidding!

They are icons, aren’t they?

Mine are pretty much standard except for better binding posts and the backplate for those. They have been with me for quite a few years now due to the fact that they really matched acoustically in my previous room. Now, not quite as good.

The level of transparency the Yammies offer can be very expensive to aquire in the form of other speakers ime.

I too have a pair - ex recording studio and stored under the stairs till my friend asked if I wanted them… the yeah…Free of charge…cabinets are a bit rough on the black tops but have good grilles and non original stands unfortunately - but I too replaced the binding posts with something better and had to repair one tweeter too…all good now and will sing again when I have some space to play them.

I also have a pair of the mini versions NS1000MM

Hi Hans-Willi, do you have a close-up picture of the large diffusion panel behind your speakers? If you do, would you mind posting it? Thx!

Hi @Teute! This is not really a close-up, but it’s the best picture I could find. 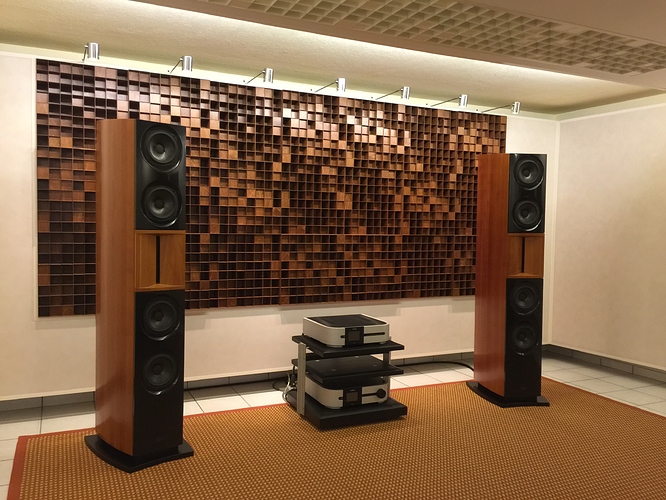 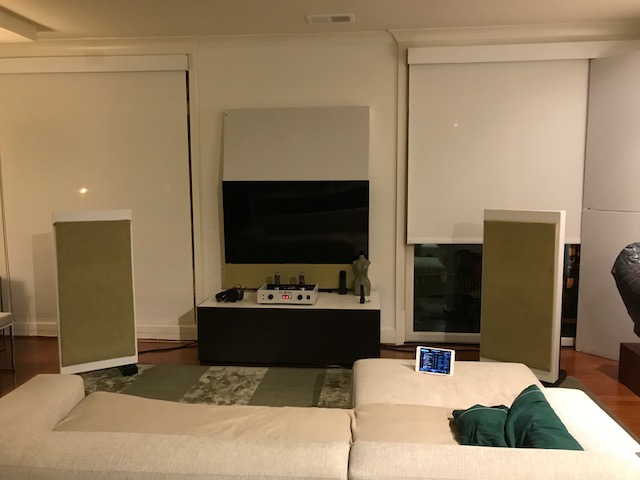 I was asked to post a picture. The room looks pretty plain when cropped like this; I probably should have at least opened the blinds. But my end game system: Spatial X1 open baffle speakers and the Vinnie Rossi LIO (with the X1 amp) and ROON remote sitting on the couch. Fed via mRendu from a sonic transporter and Synology NAS hidden in a closet.

Impressive system and styling. This must be one of the most uncompromising musically adept systems ive seem within a real home. Good job! 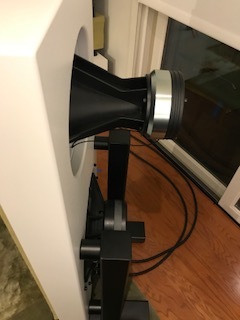 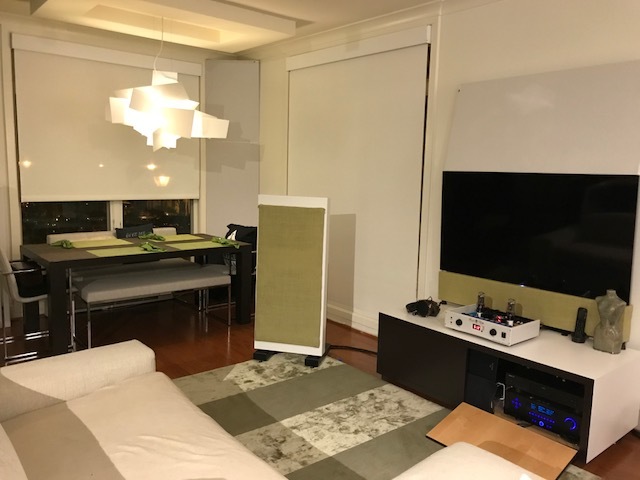 Thanks for the nice comment; the system is amazing. Another pic showing the speaker from behind and a different view. You can see the home theater system hidden in the cabinet. The strange lines are shadows. 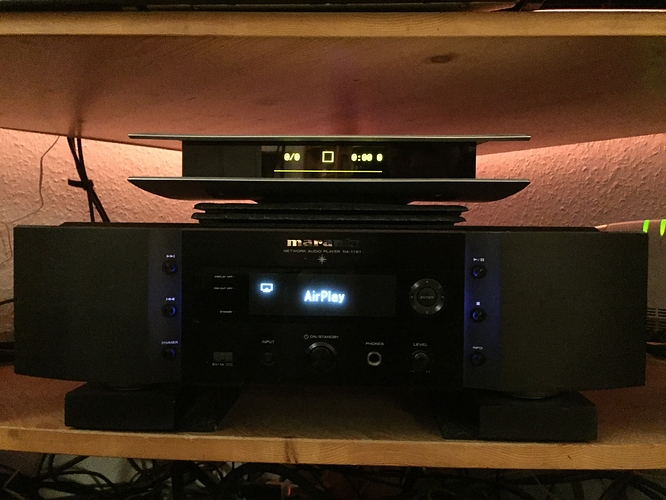 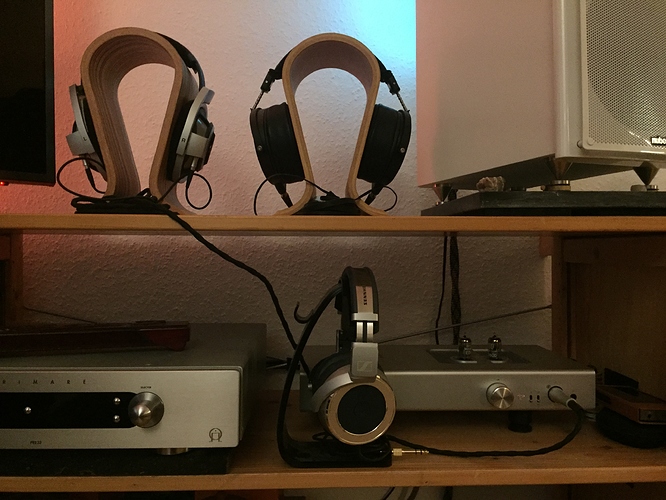 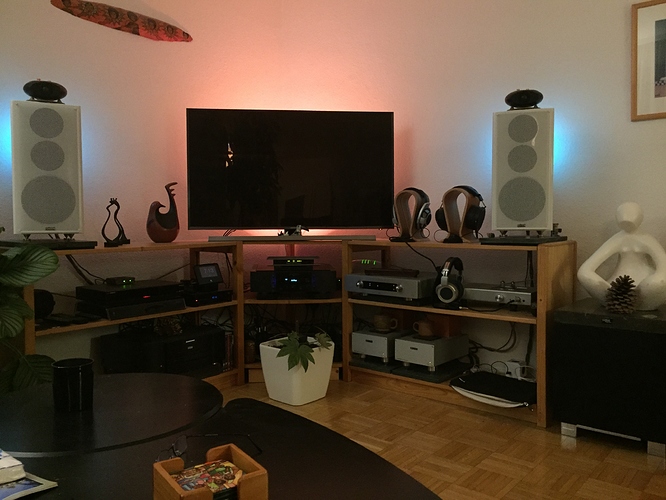 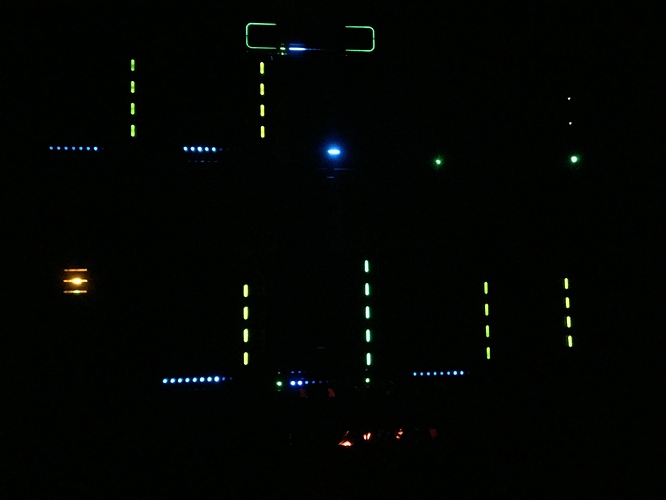 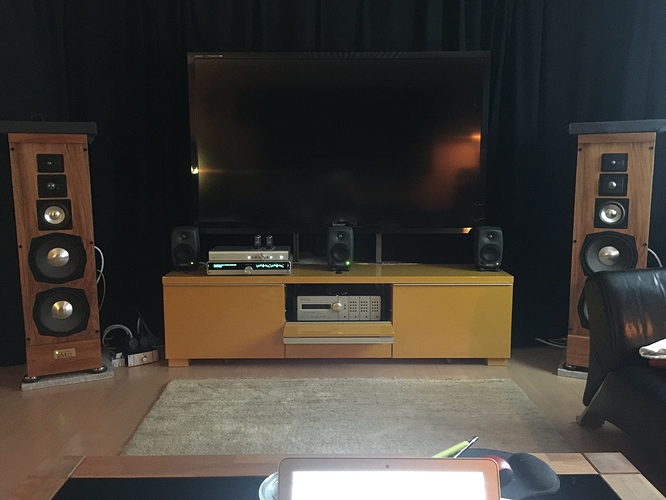