Showing (off) your Roon setup - description and photos

They were a free gift from the company that made my stands, so I thought I’d use them. At least it keeps the cables away from the vacuum cleaner head! Wood floor and golden retriever hair doesn’t mix well.

This German Shepherd owner understands your concern. However, my biggest concern is the cleaning lady. I have to make sure the banana plugs are still in place before I turn on the system after she cleans. 30% of the time, one of the plugs has come out (not good with tube amp). It doesn’t help that the speakers have the binding posts at the bottom of the cabinet facing the floor (on stands). I should switch to spades…

So far ahead of its time it’s a pity the plug was pulled on the audio division. Sold mine years ago along with the DVD32R and 250x3R (BIG mistake). Still have the 100x5R and Calliope centre speaker in the garage

I still have a Tag McLaren AV32R in daily service, along with a DVD32FLR (less usage).

Yes it’s the 32r 192dp ( had it upgraded but the fac eplate looks standard). I had Kevin Green take a look at it last year, where he gave it a PSU rebuild. It still performs brilliantly. I have the dvd32flr transport that I have retired due to the purchase of the Antipodes units. I have to find a home for the FLR now. I don’t want to throw it away. I want to find someone that will make use of it.

I do use my DVD32FLR as I still have DVDs, and still buy DVDs to watch.
My AV32R is an F3 96 non-bp version, but then it is only getting feeds from the TV STB (Dolby Digital at best), DVDs (DD or DTS) and an AppleTV (DD also, at best).
I haven’t been near BluRay or 4K sources, with the next gen sound tracks. so mostly all 48k sampling rates, for which the 96k DACs can cope with.

I also have a Tag McLaren AV32R 192 DP (but I bought mine right away as dual shark, not an upgrade) that is also (almost) in daily use in my homecinema and has never failed me

In fact, I REALLY wouldn’t know what to buy instead as I don’t give a crap about all those silly features they invent every now and then that are only supported by a handful of even sillier movies

Sorry for my rant

The DVD32R’s PQ was sublime, I used heavy duty RGB cables made by Mark Grant and resulted in genuinely 3D imaging, so much so even the wife was impressed

I had 2 AV32’s: the original F3 to which I added the DAB module and the later Avant Garde version with all the bells and whistles

My Wife thinks you must b a batchelor

Um… or he found himself a “keeper.” Ahem…

Bill, I still use my Tag McLaren AV32R 192 5.1 By-pass + DAB card in my office; with 100x5R bi-amp Proac speakers. Still sounds good, looks good (listening to Radio 4 News right now). The 5.1 by-pass is feed with a DAC endpoint. Yes, still worth keeping. I had the DVD32R which was a better CD Player than their CDT20R IMHO. I sold it when I could not hear the difference from a NAS drive via a NAD 50 streamer …. Your set-up looks like an installation and very nice.

ah, Yes, Kevin Green. He really is keeping Tag gear alive. He bought back to life my Son’s AV32R and when I had a DPA32R (could not hear the difference between the AV32R and DPA32R yet could hear how Tag McLaren at the time where ahead of the game and the sound). A real pity Tag McLaren went under. I heard they where selling kit at a loss to build the brand and reputation, yet their funders pulled out of Audio. Felt they where destined for greatness!

Dr Udo Zucker was the man in charge at TM Audio and they bought Audiolab before launching TMA. There was going to be 3 ranges: F1 for super high end; F2 for high end and F3 for the “normal” range. Some of the prototypes developed were pieces of audio art. Their F1 speakers were fantastic

Their state of the art factory in Cambridge was taken over by Meridian of all people!

Last I heard Udo was living in Portugal

Yes, I think Meridian did a deal with Dolby so they had MLP compression as the basis for TruHD and this allowed them to buy the purpose build property outright.
That was a good move for them I believe

I have my Roon core running in an Ubuntu 18.04 linux container inside the Proxmox virtualisation platform which works brilliantly. I run Roon, Plex, Sonarr, Couchpotato etc. in separate containers (virtual machines) inside Proxmox on the same machine. I highly recommend it. It is relatively easy to setup and makes changing/upgrading very easy. Roon needs a bit more RAM becuase your library is getting huge? 30 seconds inside the Proxmox console and it’s done.

I’m not an IT guy, just a tinkerer. This is totally achievable with pretty modest IT knowledge.

Host: A headless Dell 9020 (which I picked up ex-lease for a couple of hundred $) which lives in the basement. I haven’t touched it since I set it up - everything is administered from the web console of Proxmox using my laptop or an iPad.

Hypervisor: Proxmox VE - brilliant, open source (i.e. free) enterprise virtualisation platform with a wonderful GUI. Lots of great info online about how to set it up.

I have a bunch of other services (e.g. Plex) running inside Linux containers on the same platform and the host machine also has plenty of headroom on the 9020 as configured above - the beauty being LXCs share resources from the host. The exception is if you ask Plex to transcode 4K video on the fly - that gets it humming. But it copes - just.

Storage:
Synology DS1517+ 5 bay NAS
Roon Library is in a folder that is accessible as an NFS share on the NAS, and is mounted at start up by the Roon container - so Roon core sees it as a local drive. Which means it is rock solid. No annoying network sharing issues with my library.

Targets:
An iMac running into a Rode interface and some studio monitors and a four different Bluesound devices around the house, including a Node 2 that drives my main system.

Remotes: The iMac and various i devices. An iPad is most commonly used as the controller.

I also have a chromecast which I can target as a Roon monitor on my TV. It looks great but to be honest don’t use that much.

Dr Zucker stated that the mono blocks in the 100x5R Amp where Tag McLarens best Amps (better than their 2 channel mono blocks). This Amp is are still great today. Dr Zucker was a tech/engineer person firstly, to my impression. Pity the business model did not quite work out. I was informed by Tag (the administrator, via registered users???) that a stock sale was to happen; I did pick-up some units at a dramatically reduced. Felt guilty and pleased at the same time. I also pick-up a Tag McLaren digital Coax cable (for little $) to see if an expensive cable made a difference … it did - A small yet worthy blind tested difference (this taught me to not go big on cable$ yet do $pend on well engineered one$). Optical IMHO - go low $.

Mine is not that complicated but works well. Roon core on IMac i7, Kef LS50 wireless as the main source. iPad and iPhone as controllers and Sony WH1000x for headphones. Just ordered a Nuc for a new core. 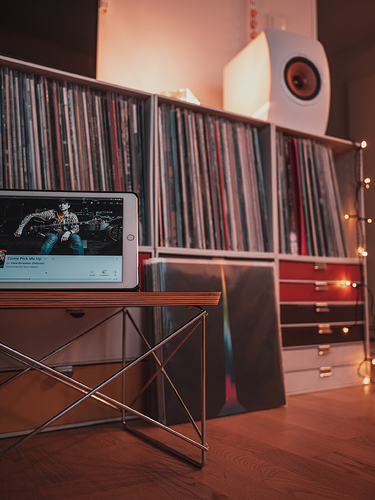 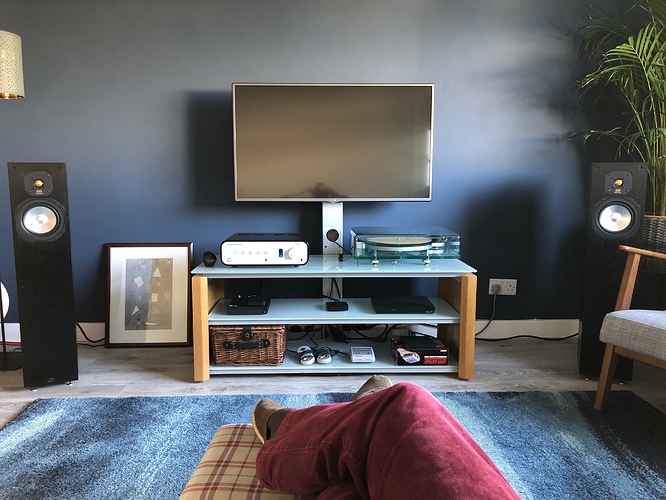 Thanks for the heads up. I’ll check it out.