Have about 170,000 tracks that i leave on shuffle for a few hours/days.

Most of the time Roon will jump around from album to album (not indefinitely as sometimes it just stops playing for reasons that I could never figure out on this board)…but sometimes it will shuffle to a track on a particular album and then the next shuffle choices are tracks on that album.
To restate: it shuffles within an album until all tracks on that album have been played.
Technically it is still shuffling but i find it odd still…
Any thoughts out there on this?

Can you take screenshots of your History tab showing this occurring ? It may be a bug and that will help in trying to replicate.

If the tracks on the album are seen as a composition I think it will play them all before moving on. Tommy by The Who for example.
Still megashuffling Thomas

Oh yeah…its the only way to go. 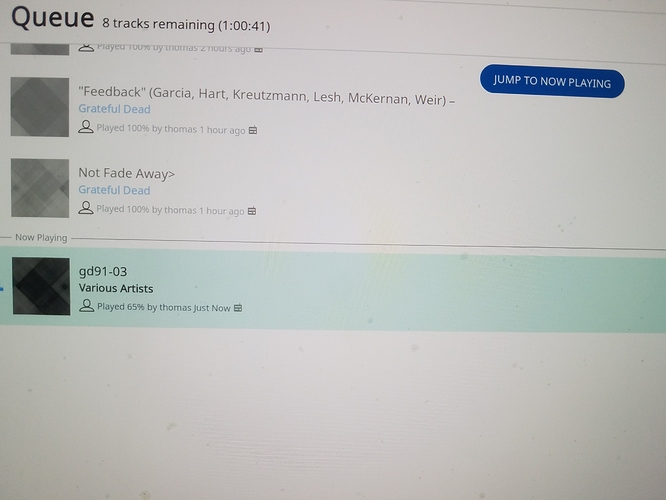 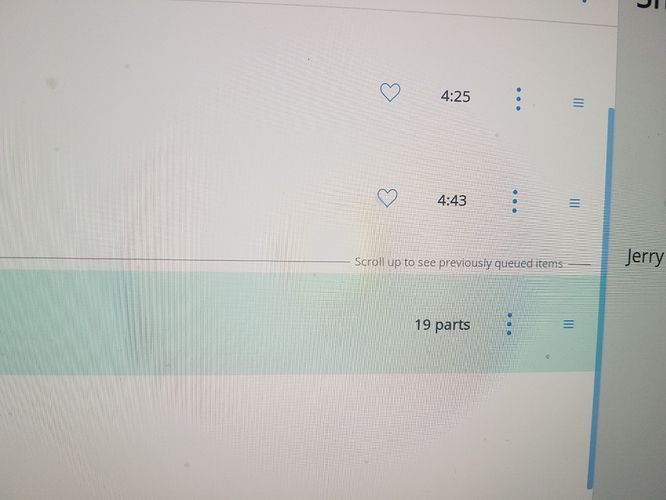 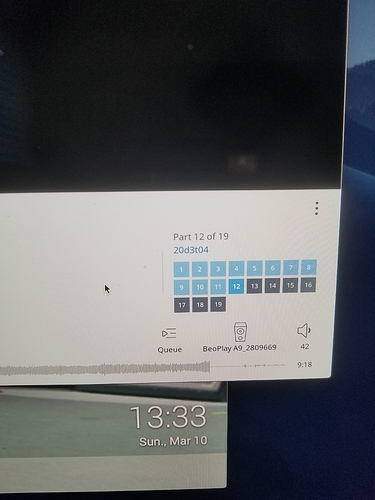 Any thoughts on the above?

Is shuffling in this way to be expected?

It looks like you have a Various Artists album which has been identified as a single Composition with 19 parts. Roon thinks it is playing a single work by playing the various parts.

What can you tell us about that Album ?

Check out this article for tips about screenshots.

Traffic’s Last Traffic Jam did this to me a day or two ago.

Not a record company official release.

Even if identified as a various artist album seems it should look to another album.
Various artist or not its still shuffling within a single album.

Not sure that anyone would value or appreciate this and ut shouldnt be doung this.

It’s not because it’s Various Artists that it is shuffling. It’s because Roon thinks it is a multi-part single composition. If you can show a screenshot of the Album entry in the Album browser we may be able to help you make edits to change that.

Are there any other Albums where this is occurring ?

Are they also bootlegs ? Can you show us what the Track structure looks like ?

But why even if it is seen as a "multi part single composition " would it mean yhat Roon would automatically start shuffling within it?

Yes they are also bootlegs

can u define “track structure”?

What metadata do your track files have ? Are they stored in Artist/Album/Track format or in some other way ? Can you post a screenshot of the Album in Roon showing the Track listing ?

why even if it is seen as a "multi part single composition " would it mean yhat Roon would automatically start shuffling within it?

Does your History show different parts being shuffled or does it just refer to a single Composition without showing the order in which the parts are played ?

If you want to edit these Albums to differentiate them into separate Tracks then I’d start at the file level using a program like mp3tag to name the Track files etc. Roon should then re-identify them as separate Tracks.

You can also tell Roon to prefer File data or disable Multi-Part Composition grouping in Album/Edit: 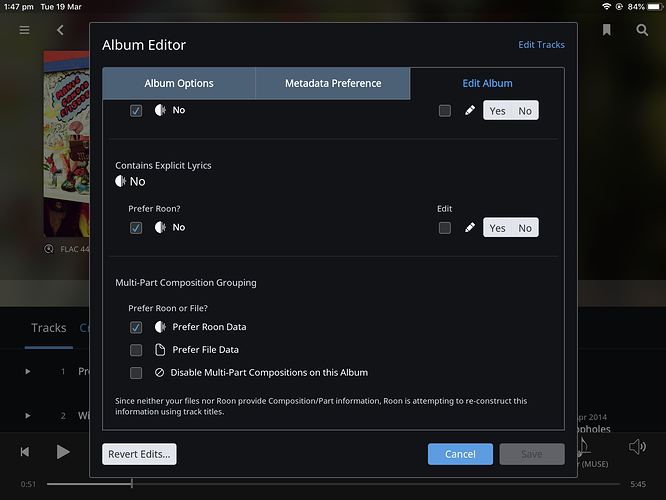 History shows single composition with a set of squares next to it denoting different tracks.
Still dont know why it just doesn’t goto another album

So I have posted about this before and Im aware “it is what it is”.

All my recordings are bootlegs.

When shuffle my entire collection roon often gets on a concert and then proceeds to shuffle the tracks within that album/concert.

I guess it thinks its a compilation or something?

Ive gotten an explanation before that made little sense to me.

I love Roon but wha the hell is the deal with this?

Even if the album is “whatever” what sense does it make to suddenly shuffle within an album.

Again I know there is not a solution but sometimes it just gets to me…seems so unavoidable.
Roon labels and recognizes the concert correctly…dont get it…ARRRRRRGH