Sibling of / relative of

Hi @support, I would like to know which is the source of the “Sibling of” / “Relative of” data in an artist page (Musicbrainz? Rovi?). Thank you so much.

Hi @Marco_Bisi - I’m not from support so I do not really know but my guess is that this kind of data comes from musicbrainz. I haven’t seen this on allmusic (who also source from rovi, I think). What I’ve seen at allmusic are the followed by / influenced by / similiar to relationships so those probably come from rovi.

Maybe a screenshot / some examples why it matters where the data comes from would help?

Thank for your reply!
This is an example I found here in the community! 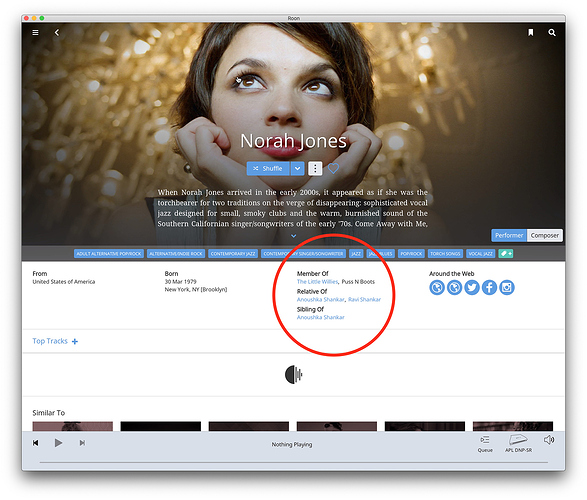 I just noticed that for some artists in my library it doesn’t appear that information (example: Max Portnoy (American drummer) is the son of Mike Portnoy, another American drummer) and I just would like to know where I can add that information so that Roon can implement it.
The “Member of” information comes from AllMusic (and I already submitted for some artists in order to make it appear also in Roon), but I don’t know where the “relative of” comes from (for sure not from AllMusic).

You could simply try to add the relationship for one artist in musicbrainz and then wait a few days (between 2 and 4, I’d say). Maybe Roon picks it up - but maybe not. There’s no official guidance on what will be imported from musicbrainz and what won’t.

Currently, this data comes into Roon exclusively from Rovi. We don’t currently import this data from MusicBrainz but we are investigating doing so in the future.