I’m trying to understand why my signal path for the Flex is “Enhanced” (screenshot below) rather than “Lossless” as per the example here. 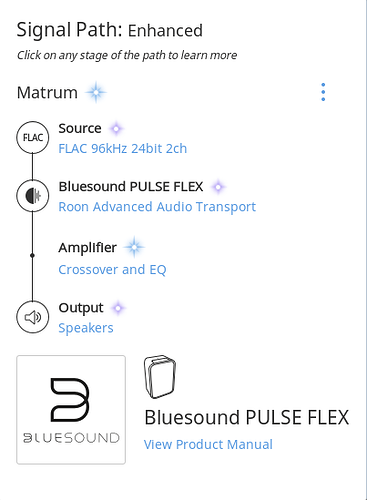 I don’t know exactly what that “Crossover and EQ” is under “Amplifier,” but there’s yer trouble. Any EQ will be a step away from “bitperfectness.”

The thing to do, IMO, is to toggle the crossover and EQ on and off and decide which way things sound better on your system, in your room. It’s cool to start off with a bitperfect signal path, but you’re allowed to make enhancements if they make things sound better.

Yes, I now understand that the “Amplifier” is the cause. But it can’t be toggled off it seems. When the Flex receives the signal, it passes through its internal amplifier which does audio crossover and EQ.
So this is custom DSP inside the Bluesound Flex, all of Roon DSP are disabled in settings.

Make sure you have Tone Controls switched off in the Flex setting in the BluOS app. If no DSP is applied in the Bluesound speaker, Roon’s signal path will be lossless (the Roon Ready implementation is smart enough to see if anything is going on inside the speaker – at least it is on my Pulse 2): 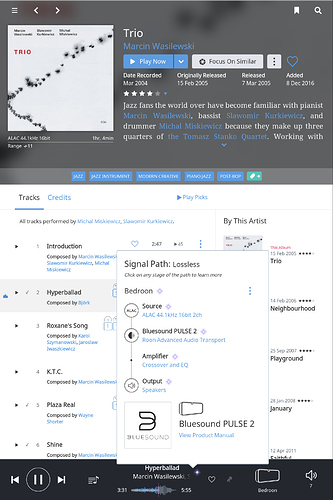 True, but imho the flex sounds better if you leave this alone. ‘Enhanced’ is really good.

Thank you for the suggestion, but tone control is already off in the Bluesound app. Very strange indeed, can’t find any other setting that could affect this.

I appreciate that, but I would really like to compare “lossless” with “enhanced”.

AFAIK this is not possible, the flex does some dsp internally which cannot be switched off.
Maybe you should ask this question in the bluesound forum https://helpdesk.bluesound.com/discussions/

Thank you, I’ll check that forum out!
Although it should be possible, as @RBM showed with the screenshot. Unless it’s different for the Flex compared to the Pulse 2.