It looks like the new iOS 12 Siri Shortcuts feature would provide a way for Siri to search and act on items in a local Roon library, using shortcuts provided by the Roon app. Some shortcuts that would really be useful for iPhone, iPad, and HomePod users include:

You can see some similar shortcuts for other music apps in the Siri Shortcuts Gallery.

I’d vote first for pause, start, etc to stop/start the music and maybe volume control with your hands full. For me, browsing is done on screen although I could see myself starting a playlist with Siri.

This would be a godsend, not just for the siri functionality, but for the potential automation capabilities.
One thing i woukd love to is when i get home is:
Group all zones
Set volumes
Start playlist

With just one touch or a siri command

I have been trying to achieve this with the roon API’s but I have no js scripting abilities, though im sure it would be possible.

I hadn’t even considered that use case. Good point!

Is this considered by Roon?

Has anyone got this working yet? I just started a 30 day Roon subscription running from my MacBook Pro, using a new iPad Pro as a remote. I do have it setup so I can control volume via the Remote app, but do not have it setup with Siri. That would be critical for me to make this work. Before I was just using iTunes on my MacBook Pro, with Siri setup and it was great.

Just tried to play some music via Siri. I get the following response:

Roon hasn’t added support for that with Siri.

Begs the question, any plans for supporting this (apparently Apple added support for iOS and iPadOS from 14.4)? 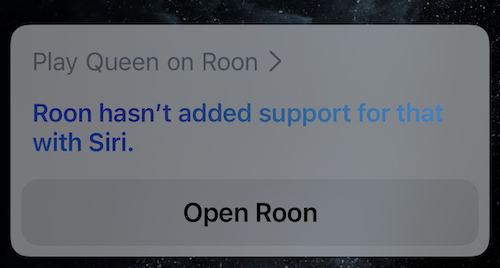 Unless Roon decides to design a native iOS / iPadOS App, this is never going to happen.

So what am I running then? It has to be some form of a native app, maybe a wrapper. But native for sure, because there is no other way of getting app published.

Maybe they use some hybrid solution to push out Android and iOS apps, possible. Nevertheless, even within these platforms you can implement platform specific functions.

by „native“ I mean this is not an App specifically designed and developed for the iPlatform. You get the seme app framework wrapped into Android, iOS, Windows, Mac, Linux you name it.

This is why there are no iOS specific features such as pinch and zoom, Siri integration or any other features and amenities you might otherwise expect from iApps.

As a iOS developer myself, I understand your point. But whatever solution they choose to use for cross-platform development, pretty sure it allows for custom use of API’s.

So to state “this is never going to happen” is a bit strong. If they want, I’m sure they can.

Probably something to put in a feature request? Agreed my wording might habe been a bit strong. Probably out of experience as to what is realistic to expect from them

Probably something to put in a feature request?

I’ve merged posts into an existing to topic.

I support this request, however like you don’t see it being implemented anytime soon