Slow back up speeds with internal SSD drive

I recenctly put a Samsung 4TB SSD in my NUC for music storage.

The speed of copying files from the drive for back ups is slow - around a few MB/s.

Is this normal or is something wrong?

Depending on the size of your library it can take some time. I only have 12000 tracks and can take a little while. Setup scheduled backups for say 2am or 3am when you will probably be in the land of nod?. I use a MacMini M1 with an external SSD so I schedule back up to three locations, External drive, Internal drive and an usb stick. 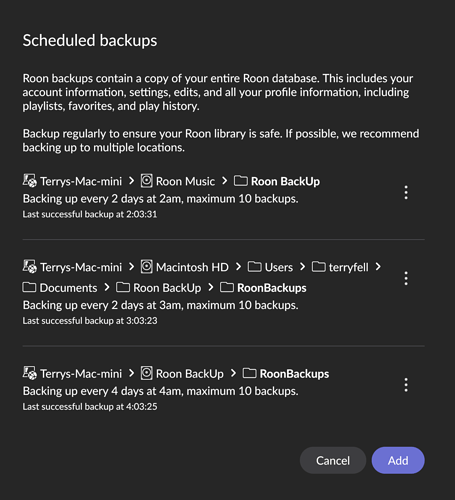 @Terry_Fell1 , the OP seem to be posting about music backup, not Roon library backup. Good on you for backing up to multiple places on different schedules. Many people think one daily backup is enough. FWIW.

The speed of copying files from the drive for back ups is slow - around a few MB/s.

Yes, that’s slow. How is your backup drive accessed, network or USB?

Thanks for the replies.

Sorry, I wasn’t clear. It’s back up of the music files not Roon. I am just copying a dozen albums recently ripped not the whole of 2.7TB. That would take forever.

I am copying from the NUC’s internal SSD to a HDD attached to my laptop and to a NAS.

As soon as I start copying from the NAS to the HDD to speed goes up to about 100MB/s. Yet if if the NUC is involved copying is painfully slow.

WiFi or Ethernet out of the NUC?

How is doing other networking out of the NUC? Could be a cable. Dunno.

My ISP’s router heavily throttles it’s throughput between ports and between WiFi and it’s ports. Connecting all to a decent gigabit capable switch and copying will probably be a lot faster.

This morning, I tried copying files from the internal 4TB SSD to an HDD attached to the NUC by USB.

I thought this might be a work around. Unfortunately, it’s just as slow as copying over the network.

It is also very slow copying from the network to the attached HDD.

Basically, copying is slow if the NUC is involved whichever way I try it.

This also involves copying files over the network, so there’s some issue with your network setup, I think.

Thanks. I’ll investigate the network, although I have no idea what issue would only affect drives connected to the NUC

Did you try to stop Roon server and then copy the files?

Mines fast as anything and it’s a usb drive attached to Rock. Are you routing via another computer to do the backup? I have my Nas direct connect to ROCKs music share and it takes very little time to do a backup of new music files. It happens every night on a schedule or when I have forced it to sync a backup.

Thanks. I presume you mean stop playing music. That makes no difference.

Copying speed this morning is less than one MB.

What do you mean by having your NAS directly connected to ROCK’s music share? If I stored my active music library on the NAS, I could back it up fast. It is when it is on an internal SSD or USB drive attached to the ROCK NUC that I get the slowness.

Whichever way I try it, the problem appears to be with storage attached direct to the ROCK NUC, both copying to and from.

Thanks. I presume you mean stop playing music. That makes no difference.

Roon Server is not just playing files. There are multiple Roon Server processes running in the background.

Then the computer your using to instigate the copy is doing the copy so it’s going from rock to your computer then to the nas hence why its so slow it’s having two network hops , you can’t avoid that doing that method.

I have a locally attached USB drive on my Rock. The Nas can see this as Rock shares all its storage via smb. You add this share as storage space on the nas essentially and then I use its backup system hybrid backup sync on qnap to copy directly to the Nas from Rock. Doesn’t matter if it’s internal SSD the process is the same. It’s quick and doesnt have to go through any other computer. If you have a qnap look at active sync jobs in hybrid backup sync that’s where you can configure it.

Thanks. How do I stop these other processes that are running in the background?

I am not sure I fully understand your second paragraph, but I will see if I can do what you suggest on my ReadyNAS.

Nope. No luck. Back up on readyNAS can’t see any SMB servers