I have seen that some albums takes up to 15-20 minutes to be added; while others take seconds. What is the reason for this big difference? Noticed this when adding my old collection of Nazareth albums (FLAC from CD). Not sure if this is relating files splitted up from one big FLAC + CUE file into one file for each track?

I just don’t see a pattern here; so I’m confused - it works fine, but it takes a LONG time.

Edit:
Roon core is running on Nucleus+; not that I think this is relevant for the problem

The FLAC files already have been split? Roon does not support CUE files.

If not that, how recently have you rebooted the Nucleus+?

I have splitt up the album FLAC file into multiple flac-files based on CUE (using JRiver Media Center 24). So what I’m importing to Roon is in fact splitted flac files - one for each track (with all flac-meta-data set like artist, album artist, song name, album name, year, category, track #, disk # and more.

Import to Roon is what I expect; so it figures it all out - it is just that most albums takes 15-20 minutes, others can take 10 seconds (entire album) during the same import batch. So why this big difference in performance ?

You mention that you used JRiver to split the FLAC files based on CUE, I have not previously heard of people using JRiver to split the CUEs but am wondering if the same performance occurs when using the CUE splitting software recommended by Danny in this thread:

Unfortunately, Roon does not support FLAC + CUE files. I wrote a bit to why we don’t support this (the conversation is about DSD ISO vs DSF, but the same applies to FLAC+CUE vs FLAC): DSD ISO Support We used to do FLAC+CUE back with Sooloos v1 as well, but since then, we’ve built an audio engine that can render sample accurate gapless playback between tracks, even from different sources. The main reason for FLAC+CUE is because many players couldn’t do that. Same goes for DSD ISO vs DSF files. …

There are a few other CUE splitters as discussed in this thread, I would also see if any of these provide better performance when importing:

I’ve many FLAC + CUE file album that is currently not supported by ROON. Can anyone advise what’s a good flac cue spliter I can use?

It does in fact not seem to be connected to FLAC CUE splitter; it seems to be relating the content itself (some albums takes “forever”; others are fast).

Edit:
And all FLAC CUE splitters I have tried does not give a “pop/click” between tracks. Struggled with this on ISO to DSF (SACD albums) on some splitter/converter applications. Transfering from one track to another during playback is perfect.

Thanks for confirming that the issue affects more than just the FLAC + CUE files. Can you please provide more information on how your music is stored locally? Are you using a NAS to store the files and how is your storage connected to the Core, via USB, Network or something else? Can you please provide a screenshot of your activity spinner when the lag occurs? The activity spinner looks like this and is located on the top right-hand screen when you are adding albums:

All music is stored on a Synology NAS, connected via gigabit ethernet (using the ethernet-connection of Nucleus+ for core). No issues regarding playback or transfer across the devices on the network.

I can provide screenshot, but it looks like you were pointing out in your screenshot. Seems to be very little load on the network during this process.

I have also tried connecting the Nucleus+ on same switch as the NAS - no difference.

I would suggest taking all this out of the equation to see if it is the network. Copy the offending files to a USB drive and attach the drive directly to the Nucleus. See if the problem remains. That way you’ve narrowed down the source of the issue.

I have two different setups with Roon; at work I use the Windows Xeon based workstation as core; with all music on a directly connected USB 3.0 drive. I will soon do a copy of my library to this USB disk and I will then see if I get same issues when adding the new albums to this setup (my guess is that I will have exactly the same problems in performance of adding new albums to library).

This does not seem to be connected with network at all. It seems to be relating albums trying to be identified. Some just takes a lot more time. Almost seems like it is the external system used to identify albums which is the problem.

I have just confirmed with our Tech team and we do not seem to be experiencing any outages in our identification services. Can you please provide a screenshot when this lag occurs by clicking the activity spinner and showing us what it says for you? It should have several stages such as Importing or Identifying. Do you by any chance have a firewall blocking Roon or RAATServer?

Hard for me to say; I use Nucleus+, nothing on that platform blocking I would expect. I also have a Cisco router - but it works very high performance for a lot of albums, other are really slow. Please tell me where to look.

If it is connected to specific media, do you have some examples of the media that is slow?

yes, an example of a slow one was Dire Straits - Brothers In Arms (2013 Remaster). SACD ISO converted to DSF files (multiple).

Thanks for the follow up regarding what kind of media is affected by this issue. Would you be comfortable with sending us some of the files that you notice having this issue so that I can submit them for analysis and see if we can reproduce the same behavior? I will send you a PM you shortly on how to send us those files.

Thanks for sending the media for analysis, I can confirm that we have received it. I have tried importing the album and it seemed import to very quickly on my end (in a few seconds). There are several stages to importing albums, from Roon analyzing the track’s audio to grabbing metadata and artwork from our servers and to see where exactly Roon is hanging for you, we require some more information.

When Roon hangs again, either for this album if you delete & re-import or from another album, can you please provide a screenshot of your Activity Spinner after clicking on it? There should be a few stages that the activity spinner lists after opening it up and the activity spinner looks like this:

Furthermore, I have enabled diagnostics mode on your account and what this action will do is next time the Core is active, a set of logs will automatically be generated and uploaded to our servers for analysis. I kindly ask for you to let me know the exact local time in your country (e.x. 3:05PM) that you notice this issue occur again so that we can cross reference that timestamp in the logs with what’s happening on Roon’s end.

Please let me know when possible. 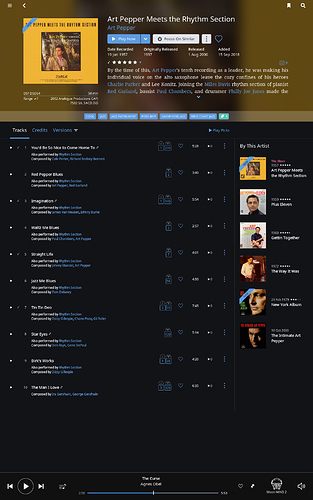 Thanks for letting me know the new timestamp. .I can confirm that our servers have received the logs from your machine and I have submitted to QA to take a look over.

As for the first screenshot you posted regarding the spinner, apologies if I was not clear enough, when this issue occurs please click on the spinner to reveal a similar page to this one, in this page it lists more information as to exactly what the import process is doing:

I will keep you updated once I hear back from QA.

I will keep this in mind next time. I will leave for vacation soon to warmer climate for a few weeks (Living in Norway; leaving for Spain). So don’t expect any feedback from me during the next weeks (I will kick back with umbrella drinks in the sun).

Edit:
Keep in mind I have two different Roon setups (one at the office, and one at home). Not sure which logs you are retrieving; or if you get both?). I have two licenses (so not moving the license between the two locations).