I find the search function is very slow. Do not know exactly if it’s since the last update but for sure it had been a lot faster some weeks ago. Running RoonServer on NAS or W7 PC doesn’t make a difference either regarding the search speed.

Anyone else making similar experiences?

Absolutely and my perception is that this has slowed drammatically for build 142. However, I am reserving judgement for a little while as the DB has clearly been re-built in some way during the upgrade process and Roon has been non-stop analysing audio files since I upgraded. Once that’s finished I’ll be able to give it a fair assessment.

I am trying to put together a post with some video footage showing the crazy-long search times that I’ve been experienced…20-30 seconds…same for album display. For instance, I look at an album - instant load - then go to some other screen and then choose to load that same album again…20-30 seconds zzzzzz then it appears!

I’m still having this endless long search.
Would please somebody from Roon staff get in touch with me to exchange some logs etc.

Anyone else making similar experiences?

I have the same experience

Absolutely and my perception is that this has slowed drammatically for build 142.

Earlier today did a search for Pentangle and Roon searched for a minute before turning up nothing. Further search in Tidal app revealed a few albums and artist bio.

I restarted Roon app, favorited an album and it synced it.

Seems okay now but I noticed this earlier and though it was my net/ISP glitching.

Can you tell us the specs of the machine where Roon core is running?
How big is you library ?
How slow it is in seconds ?

That’s weird. This showed up on my screen almost instantly: 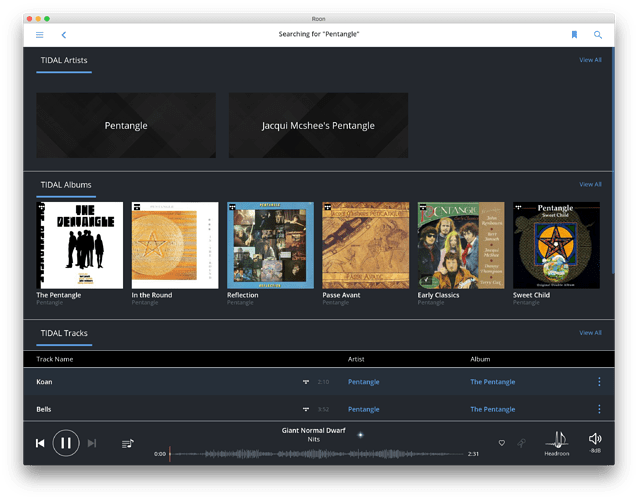 Yes, but I got no explanation for it.

I might be having some local LAN/ISP issues here. Just got back online after sitting through some kind of outage.

Earlier today I got the Roon red badge “Network Error” (something like that).

A few hours later I did a Roon search for Pentangle. The little jellyfish symbol came up and ran for about a minute. Then it returned a “nothing found” message. I double-checked my spelling etc. Then I searched on Tidal and found a Pentangle album, Favorited it and ran the Roon/Settings/Services/Tidal Edit Resync command. Didn’t come up.

I restarted the Roon Core and the Roon Remote on my desktop and voila, the Pentangle album I favorited earlier in Tidal came up. Very strange and I wouldn’t have reported it except I this thread came up where others reported long search times.

This could be a local thing for me. But it seems like Roon would report a network connection issue when doing a search instead of reporting something not found.

Another thing, this build is fast. If it were any faster, it would have ESP. On my local library sitting on a five year old Seagate Flex connected by firewire, when I hit play the tracks start instantaneously. There’s about 3000 albums and 25K tracks and to start that fast is almost unnerving.

Can you tell us the specs of the machine where Roon core is running?

I’m not at home at the moment, so by heart. I can switch the core between

Local library albums reside on the NAS. Same slow search results on both cores. Playback is fine, network is fine.

How big is you library ?

How slow is it in seconds ?

Really nothing has changed in my setup except Roon Build 142.
Search has been fine and fast before Build 142.

Thanks for help.
NOA

Wondering if it could be an iPad App latest release issue since it doesn’t matter whether the core is running on different machines/OS?

I’m wondering if anybody from the Roon team is further looking into this?

Replying to an earlier post or using the syntax @vova will cause a flag for that poster so that they see your above post. You should hear something further shortly now that we’ve done that.

The investigation is still in progress.

We didn’t do any direct changes to the search mechanism in 1.2. We know that search can be slow (but not 30 seconds) with huge libraries (250k+ tracks), but you aren’t in this category. So here are our ideas:

First, I want to understand your use case, you mentioned that RoonServer is installed on the NAS and PC.

I have the core on two machines because I’m still investigating the sound differences of the two different machines (PC with Fidelizer Pro vs NAS).
My daily machine at the moment is the NAS.

Hope this helps and thanks for investigating, much appreciated!

Ok, I see. I don’t think that Roon Core will perform well on the NAS with such specs. To me, it seems more reasonable to investigate this issue when Roon Core is located on more beefier PC (would you mind to give the better description of its specs - model of processor, HDD type).

Let me know if this works for you.

Unfortunately I’m traveling at the moment and don’t know the specs of my PC by heart. Will do when I’m back home end of June.

However, keep in mind that this PC worked well with the same library before build 142! Also network etc. is unchanged. And again, the search performance is the same slow performance on NAS and PC! NAS is not worse, PC is not better. Investigating the PC does not make a lot if sense to me in this situation.

What came to my mind is - should the library, which lives on the NAS in both cases, should better be indexed or not for best performance with Roon? It’s possible that I’ve changed this some weeks ago, don’t know the status by heart either.