I’ve just tried to move my Roon Core to a new ROCK based NUC server. Everything worked perfectly in terms of the hard stuff: I got the server up and running just fine. The exFAT drive that was connected to my Mac Mini plugged into the new NUC, I was able to access it through the share and I was able to restore from the backup on that drive. When I accessed Roon, the only items that showed up were my Tidal and Qobuz albums, as expected. I assumed that I would need to point to the new local drive and the music folder. The old machine was called Roberts-Mini and the new machine was, by default, called ROCK. As expected, the old drive path, Roberts-Mini>Roon Drive>Music>Stereo was no longer valid and the external drive was shown on the left. So I clicked “Add Folder.” That’s where things went a bit sideways. I browsed to what should have been ROCK>Roon Drive>Music>Stereo and I added that folder. Files immediately started importing. So far, so good, but if you look at the following screenshot, Roon still thinks (or began to think after the restore) that it is running on a machine called Roberts-Mini, not ROCK. 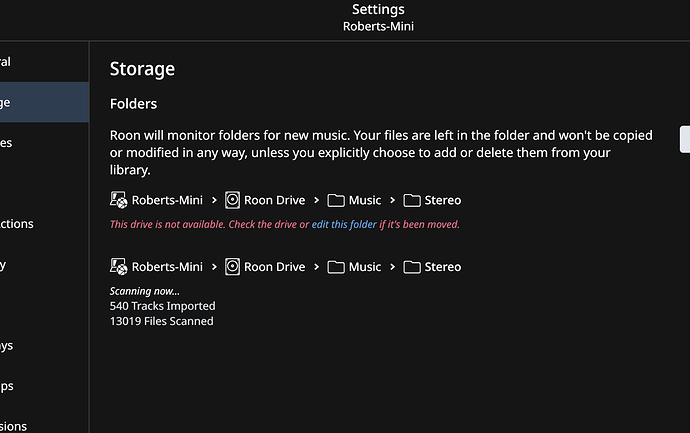 That’s the small problem because I can work around the problem and it isn’t affecting my use of the program. Here’s the big problem: my files are now importing in alphabetical order and all of them have the new banner and an added date of today. That won’t work. How I restore my old added dates? I always sort my collection by date added so I’m sure that I don’t miss anything. Is this fixable?

You can call the ROCK server anything you want to. When you restored the old server’s backup are you sure it didn’t rename the ROCK installation to “Roberts-Mini”? Go to Settings/Setup and verify the Core Name.

Yes, in Settings/Setup, the Core Name was Roberts-Mini, so the first mystery is solved. What about the second issue? How can I recover my old date added info?

Actually, the problem is actually much bigger than I thought: all my custom edits to the database have also been lost!

You should not add new folders, but edit the path in the old ones to the “new” disk.