So many wrong things with metadata

But does Roon still care about actual collections? Streaming is the taste of the hour.

No streaming service has my collection and never will, so for me I will keep enjoying being the yesterday man.

Yeah, Itotally agree. I still like MY music to be MINE. Streaming services are great but I’ve had some experiences with albums or MQA relases dissapearing from my Tidal library due to “geographical reasons/limitations”

I mean Tidal does not have any of Rammstein’s albums!!

Should I move this thread to general discussion? Currently is in Support/Metadata but I don’t think it’s the right place?
What do you think?

Currently is in Support/Metadata but I don’t think it’s the right place?

The place is actually perfect, maybe Support will actually comment on this. Since this is a problem and some solutions were offered by customers.

I have 1700 unidentified albums in my library.

I had a similar problem when I started using Roon, I had (unknowingly) tagged with ‘track artist’, and not ‘album artist’ which was blank. The album’s looked fine in other software, just not Roon - and it was quite a task to fix.

I had (unknowingly) tagged with ‘track artist’, and not ‘album artist’ which was blank

Thanks for trying to help. It is not a tagging problem. The albums do not exist in Roons Metadata. Identify album cannot find them and also not on Allmusic.
This problem might not exist as much in other genres, but in classical there are loads of Metadata holes that need to be filled.
4000 were identified- well often manually. But 1700 are missing…

Thats the same for Metal…although Classical has more depth…

This problem might not exist as much in other genres, but in classical there are loads of Metadata holes that need to be filled.

Being able to import or the system to read an nfo or txt file would solve so many issues - I happen to still have a whole load of nfo files from using Kodi and even one of Bryan Adams scraped from Allmusic in 2010 before he requested they remove his details! It would be great to be able to import this, much in the same way as we can import the thumb and background images. I’m assuming there is no way to do this?

My other gripe at the moment with metadata is the additional albums etc… that Tidal is showing in the Discography. Very often it now shows two versions of an album i.e Help! by The Beatles and Help! (Remastered) from Tidal - admittedly this was because my version of Help! hadn’t been identiified by Roon, so identifying it manually, made the two merge.

But for some reason Tidal/Roon thinks that Bat Out of Hell II by Meat Loaf came out in 1977 (it was 1993) and even though my version has the correct release and original release dates, it shows as being released (even though it has the 1993 date above it!) between Bat Out Of Hell Live in 1977 (according to Tidal/Roon) which came out in 2004 and Bat Out Of Hell, followed by Hits Out Of Hell (again 1977 according to Tidal/Roon but actually came out in 1984) - what a mess! It shows correctly in the Overview (i.e. my albums only, but under discorgaphy it is all wrong). An we can’t seem to edit the info on these versions.

Whilst having access to some extra albums via Tidal is great and some of them might sound better than the versions I have, it would be great to be able to hide albums that we want to - I could then hide the above and they might show in the correct order, or hide the multiple best of albums that are showing. Or hide the mistakes - apparently AC/DC appeared on a smooth jazz album by Michael Lington and a hip-hop album by AP9 & Husalah - absolutely no offence to either genre or artist, but this isn’t the type of music I listen to and therefore want in my collection. If AC/DC happened to play on the albums then fine, it might be quite interesting, but they didn’t it was someone called DC and not necessarily the same one on each!

Sorry for the rant, but I think like many on here, I’m a bit of a control freak when it comes to my music collection, so I don’t like seeing things that are incorrect - if we could hide albums from view, or edit them, which would seem quite simple as we can do that to “our” albums that would solve many issues as well.

Sorry for the rant, but I think like many on here, I’m a bit of a control freak when it comes to my music collection, so I don’t like seeing things that are incorrect - if we could hide albums from view, or edit them, which would seem quite simple as we can do that to “our” albums that would solve many issues as well.

Maybe I’m wrong but I think most of us liked Roon because of the promise of an organized library with “enriched metadata” and “deep biographical information” (sorry to insist on this but, that’s how it is advertised/promised on the site) so, we’re all kinda control freaks

and precisely the lack of it and the depending on sources we know are wrong and/or outdated is what starts conversations like this.
Regarding the dates and credits, despite selecting the “Prefer File” option, it seems Roon still adds metadata from Tidal.

I have a copy of Urd by Borknagar, and there’s a Tidal version, which I didn’t add to my library ("+ Añadir a la biblioteca" means add to library)
See the Tidal version has 10 tracks and mine has 9? Well I still get all the members of Metallica on the credits since that different track is a cover on a version I don’t have. So what’s the point in selecting “Prefer File” for the credits?

In the case of Original Release Date, I use MP3Tag for my tags and the field is ORIGYEAR. In Roon’s File Tag Best Practice section (https://help.roonlabs.com/portal/en/kb/articles/file-tag-best-practice) that field is shown as ORIGINALRELEASEDATE, so I created a new field on MP3Tag with that name but I had no luck, so after trying a couple of things I gave up, and let Roon tell me what it wants 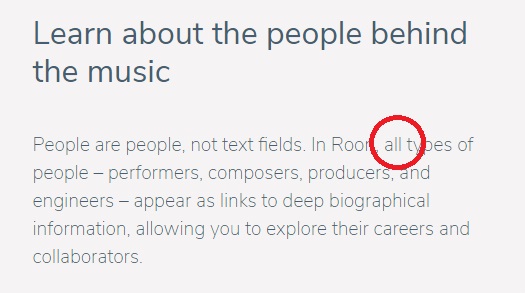 Well, maybe they refer to ALL in just one picture… 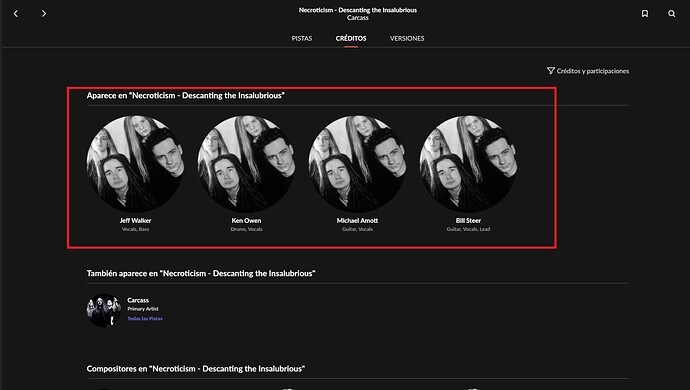 So I contacted Tidal directly a couple of weeks ago about the incorrect release dates on the six Meat Loaf albums that I had noticed. Pleased to say that after a few email exchanges (they asked for the exact webpages of each incorrect album), they emailed a few days ago to say that they had updated the release dates and I can confirm that these are now showing correctly both on Tidal and in Roon.

Not sure if they’d be happy if inundated with requests, but it’s worth a try if anyone notices something incorrect and wants to get it corrected - their email address is support@tidal.com

Great to hear that! I’m making a list of all the Metal MQA albums I find and I’m taking notes of the incorrect things I’m noticing. So far it’s 66 albums and counting…Let’s hope they can fix this because sometimes I get angry at Roon but it’s actually Tidal who has the wrong metadata…
Thanks for the update!