The “What are you listening to” thread and some other more specialised threads show the continuing strong interest among Roon users to share music discoveries and favourites with each other.

There are so many possibilities in this area that being able to share playlists would open up. Let’s hoist a few flags in the air and see who salutes:

maybe a forum thread to post lists from last.fm?

Actually meet face to face? Engaging in analog discourse?
How quaint.
You’re not keeping up with modern trends, are you.

I agree more in this area would be great.
(Surprising myself, I don’t participate in social networks otherwise.)

And I’m equally fascinated by the stuff people don’t recommend that leaves me completely cold. Darko had some lists submitted by readers and himself, including our very own Enno, and I painstakingly added them all through Tidal, and couldn’t stand a single one.

The image based Share feature is very cool, but it means you can’t search the thread (“who recommended this album that I picked up”?).
And there are a lot of manual steps.

I don’t know if shareable playlists are the answer, seems obvious it maybe we would drown in noise.

People with experience with Spotify and the like could recommend something…

For a more considered reply.

First off there is no point in trying to reinvent the wheel and last fm is the same (better perhaps) than sharing our history. An aside - I’d prefer Roon to have focus added to history so that I could do some of the analysis that lastfm does however.

On the few Hifi sites I have frequented shared playlists rarely reached any critical mass. And of course they have to be linked to what is on Tidal (or other streaming services) - not quite the mix tape of old.

I think a KISS approach would be best and if people who post in the current music threads actually say something about the album, whether it be a personal association or musical comment, this would be a huge step. Essentially we are not necessarily interested in what SJB is listening to but why and if it may be worth checking out.

Anyway here’s my last week in music, https://www.last.fm/user/sloopjohn-b/listening-report/week, no wonder I’m exhausted if my main listening hour is the one before midnight!

Tell us about this scrobbling thing.
Sooloos supported it, I think.

SJB, Here is mine. We could probably start an FM lists thread, separate from the listening now thread. Thanks again btw, for steering me to Birds of Chicago. Good stuff.

Last.fm scrobbling. I don’t need/want anything else (… apart snapshots to post here

My what great taste you have!

I would tend to agree that Roon should leverage existing services that have good features and more importantly a large user base. With any social feature mass is most important.

One feature I would like to see is subscribing to other Roon members so we can learn of new albums members add to their library.

Slightly off topic, but I just logged into my last.fm account and saw that I haven’t added anything since 2011! Plus all my recommendations are artitsts like Taylor Swift, Adriana Grande, etc. Then I remembered I had scrobbling turned on in Pandora when my kids were younger! It’s going to take a lot of scrobbling to get rid of that Hannah Montana recommendation!!!

Yeah, we believe you!

Short of John’s excellent idea, I’ve wanted to see the following for quite a while…

I’m SURE there are enough serious audio lovers here that someone will publish a set of music that I would love to hear myself, if Roon supported it.

But - to get very specific - it’s not just “downloadable” that’s important. It’s ease of use.

One possible easy to use implementation could be exportable - as subsequently - uploadable playslists, that the user community could download, and then import into their Roon core database. That implies intelligence in the import process too. Like linking to Tidal tracks as needed, user control over matching similar (but not identical) tracks, and omission of tracks that were not found. All that followed up by some sort of information to let you know what happened. If a significant amount of material could not be found, I - for one - would want to know.

Great set of questions. Thanks.

Ha ha ha. You got me! I am having my morning coffee and bopping to Arriana Grande as I type this. Highly recommended! I’m going to share that in the listening now thread! I hope I don’t get banned!!!

I would love to see something built into Roon, but I’m not sure I want to follow other people’s history. I don’t want to be flooded with individual tracks, and I also don’t want to see the same tracks popping up again and again when that person plays them. Either I will have added them to my collection, to my wishlist, or I won’t care. I want to discover music. From the second time on, it’s redundancy, not discovery.

I have never found any music recommendation AI that ever worked for me. I rely on recommendations from individual people, the threads from the “Music” category here are very good, I actually bought some of it.

What works very well for me is following people on Bandcamp and being able to see their new music purchases. Some of the albums I found this way became all-time favorites.

There was a blog post on the web before the Roon release of 1.3 that was talking about a feature that was apparently delayed (or dropped?): collections. Perhaps I’d like to see shareable collections where people can put stuff in and I could get a notification when they put something new in it. 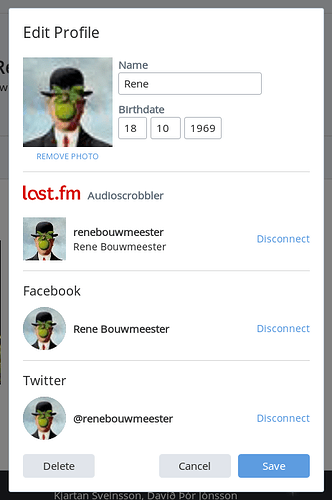 Aha!
I still don’t know what scribbling is, but I’ll try it.
Since I don’t have a pub as @Sloop_John_B suggested – USA is so backward.