Solti The Ring is not getting right Meta data

The Ring by Solti is one of the classics of opera recordings. However, Roon is not getting the meta data right. I have the albums each in their own sub-directory. However, only the first opera Das Rheingold is found with any information. The other operas I had to select from find my Opera. Siegfried shows up with no information. Die Walkurie is split into the four disks of the CD collection; whereas all the other operas are not disk divided. And Gotterdammerung is identified as the whole cycle with no option to choose Gotterdammerung from the album finder. In all a bit of a mess. Any help would be appreciated.

My situation is different but still not quite correct. I’ve actually got two versions of the Solti Ring - the older cube with the the picture of Solti and Wagner on the box and each of the operas, and the recent box with the digital remastering and the Deryck Cooke lectures. Roon identified the newer set without problems:- 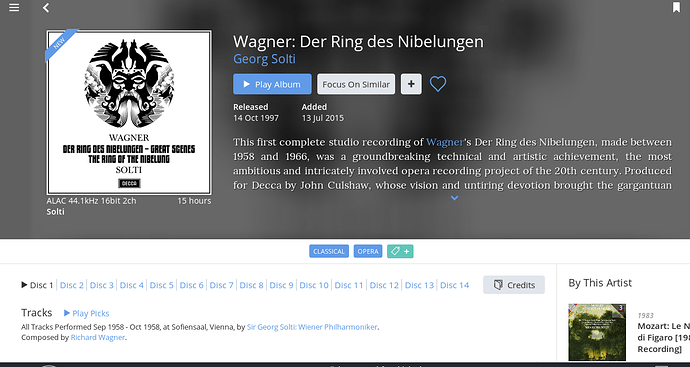 The older set has a mix of album covers with the Rheingold identified as the full cycle, but having the Allmusic details. The others have the correct titles and track information, but no Allmusic notes.

Here’s a screenshot how the folder structure I use:-

Which Solti Ring do you have and what do you use as the album artist?

I have the old cube but never ripped it from CD. I have the new Blu-Ray which I’ve ripped to

In the Meta Data for all the operas:

The issues with Solti’s Ring have not straightened themselves out with the new update. I was wondering if there was any suggestions for getting this worked out.

I changed the metadata preferences for Title and Performed By to Prefer File and this does group the separate operas together now. It helped with the Janowski Ring as well.

If you literally have DISC: 1 for all discs, it’s going to give Roon a headache. If it finds a Disc x of y Tag in your files, it assumes it is correct, which in this case will cause failure.

I have no problem with my Solti set, which is this one:

It found it as exactly that on initial import, then when I changed the folders around it found it as the four separate releases.

Try changing the Disc x of y tags the correct one and see how you do.

Hey thanks Ludwig, I perhaps should specify. I have the blu-ray release which is just one disc on rip. Additionally, the break points on arias are different that the original Solti set. So using that information doesn’t work.

While I can put all the files in one folder and label the tracks 1 - 172. The list using my own meta data (which shows divisions by Acts and Scenes correctly) cuts off in the middle of Siegried at track 106. this might be a bug of the display. Going into track edit shows all 172 tracks there.

If I choose the option for the digitial download which is the same track listing as the blu-ray, it does break the set into disks 1-4, 1 for each opers. However. There is no Act or Scene information. It is just one long ugly list of tracks on each disk.

It’s an unfortunate fact that Rovi/Allmusic don’t have pretty much any BD-Audio releases in the database. I’m not sure why.

If the BD-A release has completely different tracks from ALL other CD releases of the Solti, then you are going to have to use the file tags and edit them for yourself. (Weren’t there also CDs in the package? Are they not the same track divisions? Because at some point they should then be in the database.)

Is that something you’ve done before? Does your rip have any track details at all up to now?

Old post, but i noticed in your screenshot that even though the new cover of the ring is shown, it still identifies the album as being issued in october 1997, which is not correct. the newer version of the ring (your album cover) was issued in 2012.

The point being that there is a disconnect between the CD coding and Roon metadata. I can’t get Roon to load the 2012 cover, nor does it correctly list the tracks in the discs (after I painstakingly checked the tracks against the disc set and moved the tracks into their proper position).

I will revisit. It has been awhile since I"ve tried to get the meta-data right on the Solti Blu-Ray Ring.