[Mysteriously but not surprisingly, four hours after I posted this, after all the wire shifting and rebooting of the DAC, the Nucleus rebooted itself, and now it works. Go figure.]

Here’s what I had:

Everything worked, all the time.

Switching to the Nucleus required me to get the internet to the new box, so I bought an inexpensive WIFI N adapter/extender, which, amazingly, worked the first time via WPS to my router.

And a cable to the Nucleus.

I sit down at my remote Mac, and boom, it works! I can see the Nucleus. First time.

I was able to find the internet and set up Tidal via the remote. First time.

I was able to set up audio to my Sonos in the kitchen. First time.

I was able to find the path to my NAS and set it up. I’ll say First Time for symmetry, but it took two tries. Still. Amazing.

Now, the two problems (thanks for bearing with me)

Thank you support for all the support and magic.

Doesn’t the Nucleus have a gigabit Ethernet port?

Right, the ethernet port is plugged into the switch, so I can network the NAS, the DirectStream and the wifi extender.

Am I missing something from your question?

I can’t plug the wifi router in directly because wifi comes into the other side of the house and I’m unable to string a long cable.

here’s a pic of the dumb switch: 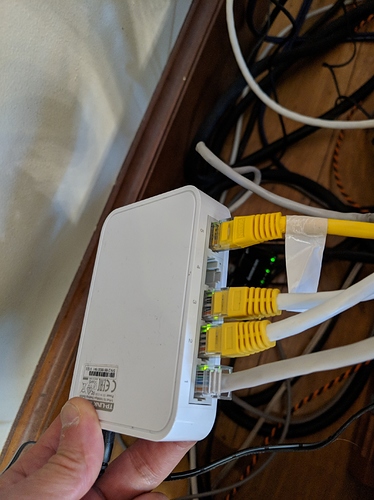 I suppose the first question I’d ask is what file system is the USB SSD using and is it compatible with Nucleus? I dont know what the Nucleus supports, so it could be a stupid question!

Do you have any other USB storage devices you could try to see if its a problem with the Nucleus or the USB device?

I grabbed a usb memory stick, plugged it in, it worked

for kicks, I put the unplugged Transcend drive back on my Mac, it didn’t appear.

Switched to the other USB port, ran disk utilities, mounted it, ejected it, put it back on the Nucleus

4 points for gryfindor. Thanks for that.

Now, if I could only get the music to play on my dac…