Some albums don't show under the Artist

I have a few different versions of Kraftwerk albums. Some are not showing under Krafwerk at all - they are not hidden or grouped with other versions. If I go to the Tracks browser and I filter the file path with “Kraftwerk” I see these missing albums. If I click on the album name the album appears as you’d expect. Under the album title there’s the artist “Kraftwerk” and if I click there I go to the Kraftwerk page, but the album does not show in releases!

The album in question is Kraftwerk’s “Techno Pop”, the US version is known as “Electric Cafe”. I see my CD rip of Electric Cafe (which btw does not show the TIDAL and Qobuz version in Versions but that’s not uncommon). But Techno Pop is nowhere to be found in Kraftwerk’s page albums.

I have done “Unhide Album”. I have gone to the album from the Tracks browser and looked at it. The artist and hyperlink are correct but when I click it it goes to the Kraftwerk page and the album is nowhere to be found.

It is. When accessing it through the Tracks browser all album data looks correct.

I had this same issue with multiple Kraftwerk albums including the Techno Pop/Electric Cafe variants.
I can’t quite recall how I fixed it but if memory serves Roon was identifying some of the variations as bootlegs.
I think doing one of three things fixed it:
Editing the albums to not be bootlegs.
Changing Metadata settings to use file metadata.
Changing metadata settings from using file metadata to using Roon info. (I can’t remember which method I was using by default at the time this was happening)

I realize this is a bit vague and perhaps not super helpful but the point being with a bit of album editing the errant albums now appear for me. 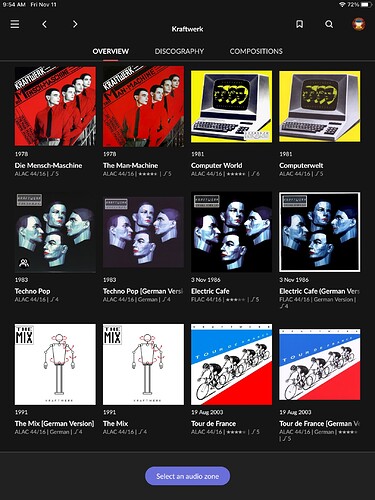 I have done the “Prefer file” and similar. That didn’t help.

Will look at the bootleg flag. But why would Roon hide a bootleg album?

The question to the Roon team is simple:

I know it doesn’t make sense but Roon was identifying Techo Pop as a bootleg and it didn’t appear in my albums.
When I edited it to not be a bootleg I could see it again.
There may be another variable at play here?
I have other albums that are in fact bootlegs and they appear as expected.

I forgot to mention I have this same issue with some other artist’s albums: They don’t appear in the artist’s Overview or as Versions but I can find them by searching manually.
These albums show the correct artist when I open the album edit page.

Bootleg was ticked. Changing made it show.

I think there are several different things going on here that make this a confusing case.

In 2009 a remastered version was released under one of the album’s working titles, ‘Techno Pop’. On this version the original 8:03 album version of ‘The Telephone Call’ was replaced by two tracks: the 7" mix of ‘The Telephone Call’ (3:50) and the remix ‘House Phone’ (4:57). Both had originally appeared on the single release of ‘Der Telefon Anruf’.

So the Techno Pop version has 7 tracks vs. 6 in the original release. 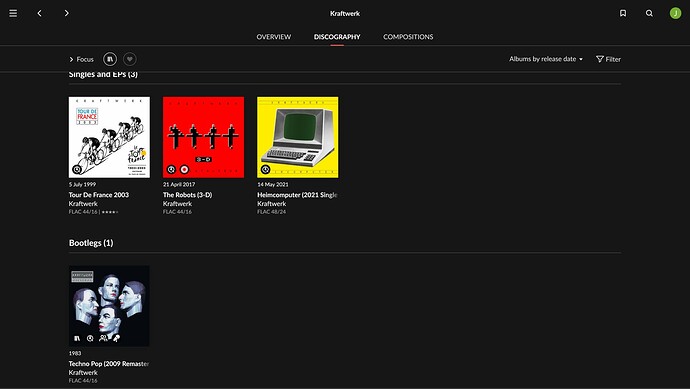 I labeled the folder for the album like this: Kraftwerk - Electric Cafe (1986) [CD Elektra 9 25525 -2], and have “Show album version” enabled under Settings>General>Browsing Preferences>Customize album display>Edit so the info in brackets will appear in Roon to help clearly identify which version it is. I also have “Show hidden tracks and albums” enabled under Browsing Preferences. 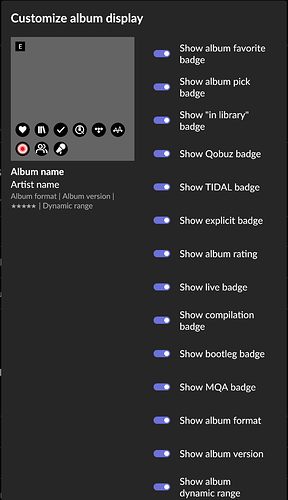 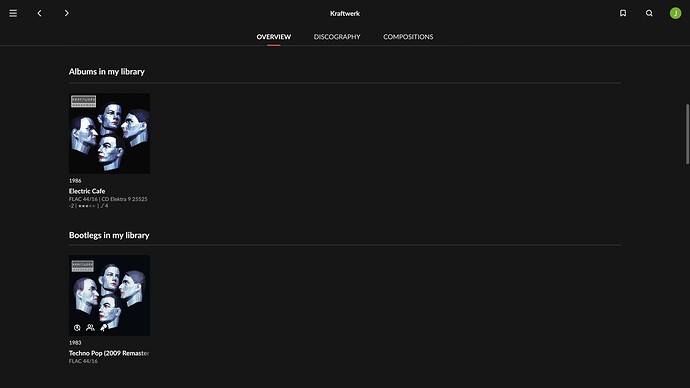 So without having to modify any embedded metadata or change any metadata settings from within Roon, Roon was able to correctly identify and match my local files to the proper release.

I guess the short answer is Roon is putting Bootlegs in a category different from Albums. That’s kind of odd… 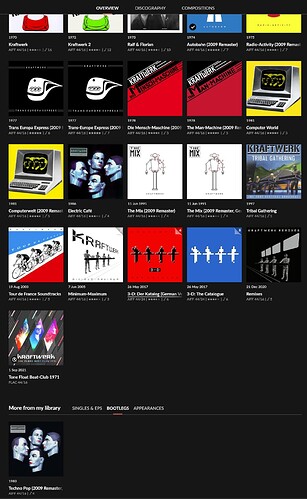 @miguelito, for artists who have tons of unofficial releases, like the Grateful Dead (Discogs is showing 723), having a separate Bootlegs section can be a lifesaver. In other cases, like here, it can create confusion.

In the case of Techno Pop, I have my suspicions that perhaps it was flagged as a Bootleg in the Roon database as a “fix” for someone who was having trouble getting Electric Cafe to display properly under Albums, which is pretty ironic if you ask me.

As you discovered, the “fix” only created more confusion.