Some help with my setup please [Solved]

Still quite new to Roon (really enjoying it!) and looking for the best way to run it. I searched the forum and the Roon Manual, but couldn’t find the answers to my questions. Hope someone can help me. My current setup is as follows:

My music files are on a WD My Book 8TB external HDD and when I play music upstairs, it’s still over wifi.

However, I’m not 100 % sure what the consequences are, so a bit reluctant to drill a whole in my ceiling

. So here are my questions:

Hope someone can help clear things up for me in simple, non-technical dummy language!

If you want to use a GUI on each Mac Mini then Roon as Core on the fastest and Roon as Remote on the other is the simplest solution.

If you wanted to you can run Roon Server on the fastest and Roon Bridge [edit: corrected] on the other. Neither of those have a GUI but you can also install Roon on both machines as Remotes and point it at the Core in Roon Server. The idea is that you can start and quit the Roon Remotes as Controls without affecting playback. If you are connecting your DAC directly to the Mac Minis then you may notice an SQ improvement when the GUI is shut down.

Thanks for your quick reply @andybob, much appreciated. So I guess my current setup is the simplest as long as I don’t have an up to specs iPad/iPhone.

Interested though in trying out your other suggestion. Are there clear advantages to be expected in speed and SQ, or is this uncertain and different in each individual situation? And are you sure you mean Roon Remote, not Roon Bridge? The Roon Download site suggests the former is just for iOS, whereas the latter is for MacOS.

Finally, would it be a pretty self-evident installation to do or are there risks involved, e.g. conflicting databases etcetera?

Doh ! I did mean Roon Bridge sorry, and I’ve edited my original post to correct it (Stalinist historical revisionism at its finest !).

To explain in more detail you would:

Now you can start and stop Roon on each machine as you want, but playback will continue. SQ can benefit from shutting down the GUI while listening. A lot of factors influence the apparent improvement in SQ from closing the GUI including the power supply, monitor hardware and DAC. The improvement is most obvious in quieter passages of Classical music and you may not hear it with some genres of modern music.

Thanks @andybob, I’ll definitely give this a try and report back!

Hi @andybob, just finished and tested the new setup according to your last post and works like a charm – even over wifi! I’m all Remote ready now, so I’ll start saving for a new (bezel-less?;-)) iPad or iPhone. Thanks again for you help!

And of course will connect both Macs via ethernet

Do you perhaps know whether or not there is a difference in SQ between cheap or more expensive ethernet cables?

Cat 6a is fine. I thought this was a pretty interesting article from Ars Technica, although they may not appreciate that sometimes cutting the shield is a good thing for audio.

I use this between my BRIX and router. I have no scientific basis to expect it makes any difference to SQ, but I’m happy. I think, however, that Mac Ethernet ports have galvanic connection to shielding and, if so, would recommend unshielded cable.

Thanks @andybob , that was an interesting read. I was advised to buy AudioQuest Forest CAT700 cables (Cat 7) and use Telegärtner Cat 7 connectors. Altogether EUR 300 (for 11 metres), but to me the conclusion from the article is that they will sound no better than standard ethernet cables. Yet your cables are also more expensive, which seems to imply that the sort of ethernet cable DOES matter. Did you test or compare anything before you made your purchase?

[EDIT:] I ask, because if quality / price of ethernet cables hardly matters, the money saved pays for half an iPad (for which I’m currently saving to use as a remote for Roon. Priorities… ;-))

Nup. I didn’t test or compare anything and I made other changes when I introduced them, so I really can’t claim any improvement due to them. My feeling of happiness could all be confirmation bias.

Personally I would not spend EUR 300 on Ethernet cables. My advice would be to get the iPad first (this will make a real difference to your listening convenience and enable you to avoid the Roon GUI on your Mac Minis), use well constructed Cat 6a and after you have acquainted yourself with the sound, borrow or loan one of the more expensive cables and see if it makes a difference in your system that justifies the cost.

Daniel (@rugby) has seen more Ethernet cables than I’ve had hot dinners. Let’s ask him what he thinks.

Thanks @andybob , sounds like a sensible thing to do. Still curious what Daniel has to say though 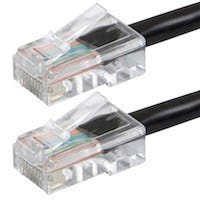 Save the time and hassle of building Ethernet cables by using fixed-length UTP Cat6 Ethernet Network Cables from Monoprice!The ZEROboot series of Ethernet cables are designed for IT and data center professionals who prefer interconnect cables without...

But, I would also suggest something like this, just to make sure everything is ok, unless you have something already… 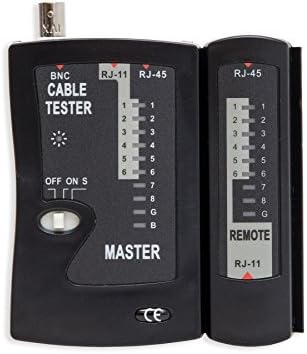 You want to test your new cable. Heck, test every cable. It is much cheaper to test a cable before pulling it than finding out after you have run it that there is an issue.

As an aside, audio cable testers including testing XLR cables are available. It never hurts to actually test your interconnects.

Thanks @Rugby ! The money saved goes to the iPad

Two things I wonder though: (1) Isn’t CAT 6a or 7 even better? (2) Why unshielded? @andybob also suggested this, but not sure I understand. I would think (non-techie) that shielded protects against interference?

The difference between them comes down to handling higher transmission speeds needed for 10G; specifically for cable runs over 33 meters. As to needing shielding, quote from http://www.diffen.com/difference/Cat6_vs_Cat6a
“6a also has extra shielding helps boost reliability and block out interference in areas that may suffer from heavy electromagnetic interference (EMI). The average home office or small business user will rarely need a shielded Ethernet cable. Shielding benefits industrial environments the most.”

Basic point, nothing in a home environment in short cable runs, and yes 11 meters is short for ethernet, is going to produce that much interference. If there is then you probably shouldn’t be living there,

In fact, after looking at the HQP limiter alert, I believe now that the popping was caused by my not leaving sufficient headroom after convolving a room filter in HQP. Dialing the output down -7 dB in HQP has solved it.

The reason shielding can be problematic is that although Ethernet signal wires are galvanically isolated by transformers, the shielding can provide a path for noise if it is connected to the ground of a noisy computer. Some connections do that and some don’t. The BRIX doesn’t but the Mac can have two small metallic studs inside the Ethernet port who’s function is to ground the shielding in cables. Depending on how noisy the power is in the Mac and a host of other things like how you hold your mouth, that can make a difference for the worse.

Thanks a lot guys, that’s some helpful advice!

@Rugby , I’ll give the cables you suggested a go and hopefully in March, take a look at the new iPads!