Some tracks not playing to completion

Same problem for me

How often are you seeing this issue occur?

Since upgrade to 1.7, I experience random skips when streaming with Qobuz. Those happen at various intervals, usually 15-30 minutes of each other. Skips were quite severe last night (EDT 18h to 24h). This morning I followed advice to logout from Qobuz and log back.This did not help, and annoying skips keep occuring (3 skips in the last hour (EDT 10h-11h). No message on the Roon display when this happens.

If you want to activate logs on my system, please go ahead. I am all there to help!

As a complement of information, this is what happened when streaming a 24/96 album from Qobuz in the last 2 hours (EDT 10-12h) 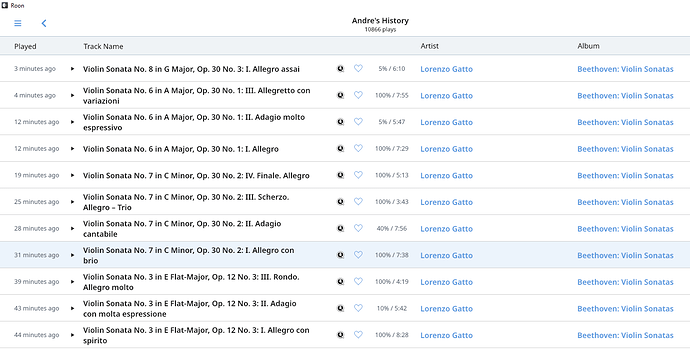 Would it be helpful if I posted updates history screenshots during the day ?

@dylan
Using suggestions posted in different places by @dylan and others relative to the Qobuz skipping track issue, I spent time today (a lot!) trying to accumulate data and perhaps identify recurring patterns to help diagnose this problem.

Using the above setup, I played the same lenghty Qobuz album:

In each test, album was streamed from start to end without interruption, with nothing else playing in Roon. Here are the data that accumulated in my History for each test.

It can be seen that skips occured fairly regularly on both endpoints. @dylan asked to check if they occur with System Output. On my system, they do as frequently as on the ultrarendu .

As for the possibility that the skips occur on specific tracks, I placed side by side the History contents for the two endpoints to ease comparisons. In the image below, the data for the Sonore ultrarendu occupy the left column, and those for System Output the right column. 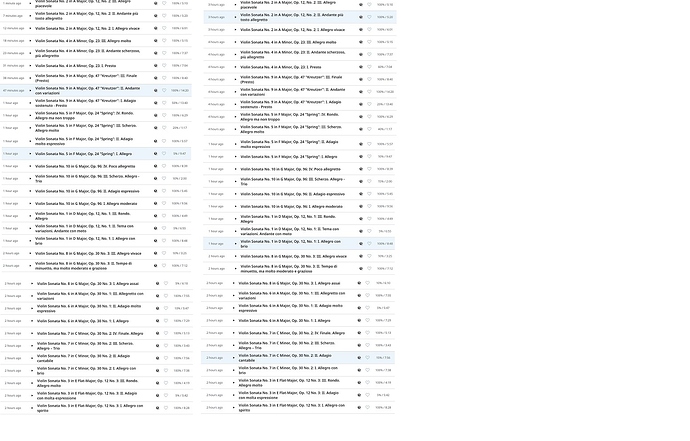 I think it is very interesting to note that:
1- Skips occur almost always on the same tracks. The only 2 exceptions are for tracks:

2- The percentage of time played when the skip occurs varies between the endpoints. This percentage is not systematically longer on one side or the other. For example, for Sonata No. 9 I. Adagio, the track played longer (50%) on the ultrarendu than on System Output (25%). For Sonata No. 5 III. Scherzo, it is 20% for Sonore ultrarendu vs 40% for System Output.

I have no difficulty streaming the Album to the Sonore ultrarendu in DLNA/MPD mode using Android BubbleUPnP. as control point. This rules out the possibility that the album is corrupted on the Qobuz server. This is in line also with the fact that, on Roon, a skipped track may play longer on one endpojnt than the other.

@dylan I hope the above data can help Roon team solve the problem. Would it be interesting to send you my Roon logs ? I will always be ready to cooperate and do more testing if needed.

As mentioned in our PM, we just released Build 505 with some changes that we think will help here. Go ahead and install this on top of your existing install, and let us know how things are going, ok?

Hi all, Thanks everyone for all the kind words and great feedback about Roon 1.7! The last 5 days have been the busiest ever on the Community Site, and we’ve been tracking a few issues that we wanted to try and address before the holiday here in the States. We know that some of you have been having problems streaming Qobuz and TIDAL reliably since Roon 1.7 launched. While we have been unable to reliably reproduce this problem in-house, we undertook a thorough investigation, audited the code i…