Something about an update, now I do not have Lossless!

There was a message about an update that I did not get to select an answer to, which I do not see reflected in my “About Roon” software message, it shows no update whatsoever. So I do not believe that this update was ever installed correctly. I mean clearly there were some changes made but it was not registered by the program itself. It still says version 1.6 build 475 64bit stable, which is what it has said since I installed it.

I tried to go back using the backup feature and sadly found out that only backs up the album data. Which was a while ago, now I have to redo a bunch of albums/bands/groups that I had selected.

After this message, my Signal Path lossless structure changed, it went from being all Lossless to Enhanced! In fact the entire Signal Path Hierarchy has changed in this list of devices and software. There is an extra node shown now. It shows that the culprit seems to be from the “MQA Full Decoder” (which was not even present moments before) not running lossless. Now I am very certain that my Mytek Brooklyn DAC+ does complete Encoding/Decoding of MQA’s. So I do not know why anything has changed. Besides my main point would be that it was working perfectly before. Now it is not? How can that be? More importantly how do I fix it. I have included 2 screenshots of the before and after Signal Path’s.
I hope something can be done to bring it back to lossless before I have to decide to subcribe or not to subscribe.
TYIA
GEC

Now here is the big problem, I have just recieved notice that it is time to pay up or get lost! I find it hard to pay up if Roon is not going to properly work with my hardware. If I had a Lossless Signal Path at one point, I should still have it with the same hardware and no hardware changes.
I really was liking Roon. I don’t need headache’s though. It seems simple, I have the right hardware, a more than able computer, things should be working… as they indeed did at first. I might have to go back to just using Tidal. That would be misfortunate.

My internet is directly connected through Ethernet and Wireless to my DSL service.

I am using a very excellent Mytek Brooklyn DAC+ connected with a Shunyata Venom USB cable. I am currently listening through some Sennheiser HD600 headphones over a Nordost Blue Heaven headphone cable, soon to be a Meze Empyrean headphone with a Double Helix cable. 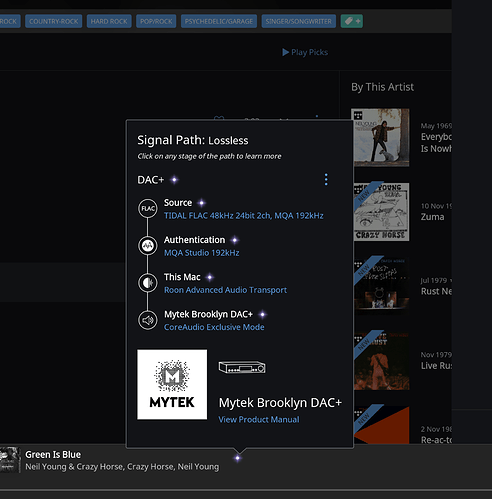 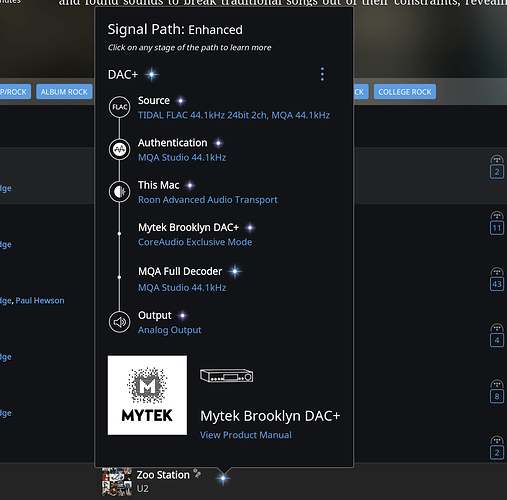 Thats is exactly what you should be seeing for MQA. Before it was incorrect and not showing the 2d unfold from the Brooklyn. If you listening to MQA then the 2nd unfold is classed as enhanced in Roon as its applying mqa filters and its audio origami.

Thank you for responding.
I still dont understand why it is not lossless however. How do I make it lossless?

Its MQA it has processing done outside of Roon so you cant. Its no differnet to what it was doing before its just reporting back correctly now dont worry about it.

I still dont understand why it is not lossless however

Thanks again for answering!
Oh, bummer, I was hoping for a super clean audio path.
So should I stick with Roon, I like the extended information quite a bit? It is better than plain Tidal? I have 2 days to decide. You have been with Roon for a little while… Is it worth it? Do you pay each year or did you buy the lifetime?

It’s worth it, and in Roon you’re getting everything you can out of mqa with an mqa enabled dac, in fact it’s the only player I know of that enables you to do DSP with mqa and still have the DAC see the output as mqa. Buy lifetime and don’t look back.

it is a clean audio path, its MQA so thats what it is Roon does not change anything here. Most will argue its not a lossless signal to begin with.

Yes used Roon for 3 years and very happy, its not perfect but its the best out there for what I use it for. No other software allows me to control 8 zones all from different manufactures.

Yes but it is not an audio format, it is a wrapper or transport for large audio files. So if you send a lossless file is should be lossless when it gets to its destination.

This is what I understood MQA’s to be, described in layman’s terms.

See my post above. Don’t let these guys confuse you. Your system is working properly and unfolding the MQA properly. You just need to load a file that is MQA 24/192 to see that.

This is what I understood MQA’s to be, described in layman’s terms

Your understanding is incorrect. FLAC is a wrapper, like ZIP. mqa is a lossy codec, like mp3, just higher resolution and processed through filters. Some like it, but lossless it’s not.

Oh, thank you for being so observant!
Duh, on my part! LOL
Ok… So, I am going to go put my head back in the sand again, nothing to see here. LOL

You’re welcome. Many people here are so anti-MQA that they can’t see the forest for the trees.

Ok, cool thank you for letting me know that. I was definitely confused. Your info is very welcome.

Oh I am thinking these MQA’s are very cool. I’m a little confused about it but I love the idea.

I like MQA for most songs, but not all. To me it adds a little punch and more bass. Streaming the smaller files is not an issue for most of us as we have ample data and fast internet speeds. I use both Tidal and Qobuz, so I listen to what I like, not what is “in vogue.”

Don’t get hung up on the signal path. It’s a technical detail. It should sound fantastic with the proper MQA unfolds.

This is incorrect. It will be unfolded to 88.2kHz. Examples include Piano & a Microphone 1983 and Still On My Mind.

The MQA Decoder “unfolds” 44.1kHz to 88.2kHz and 48kHz to 96kHz. The MQA Renderer uses filters and upsamples the file to that of the original master. The Brooklyn DAC+ is both Decoder and Renderer which is why the unfold isn’t shown in the signal path.

@RetroSoundBird Think of Enhanced as Lossless plus some digital signal processing. Two examples: When I use my Bluesound Pulse Flex the final stage (inside the Bluesound) is Enhanced because this is a single speaker device and some DSP is applied. Likewise, I use volume levelling so my signal is always Enhanced in the signal path.

For AAC and MP3 you’ll see Low Quality in the signal path.

The MQA filter is designed for 88.2kHz and 96kHz. The “unfold” is doing upsampling for 44.1kHz and 48kHz masters; for higher sample rates the “unfold” uses the decoder. 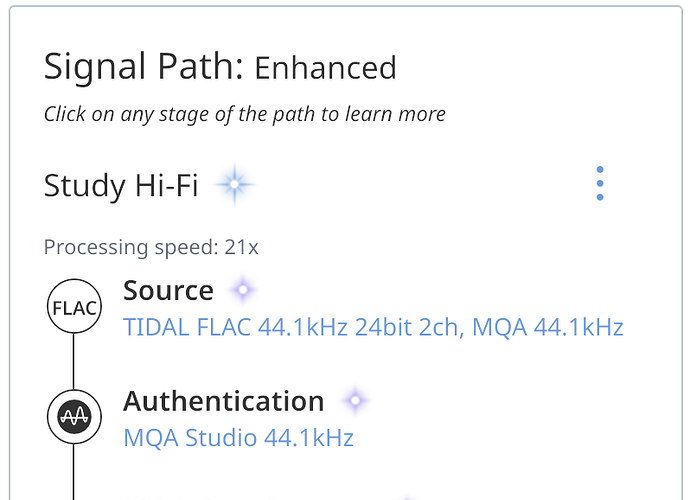