Sometimes classical artists and performers are missing from lists

In classical music, when I scroll down from the composition to “All Recordings” usually what I look for is the orchestra and the performer. Here’s an example 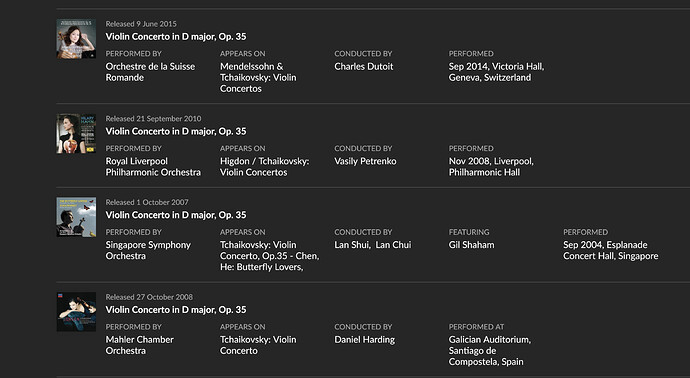 Sometimes the artist (in this case a violinist) is listed under “Featuring” but often it is blank and a few clicks are necessary to find the detail.

It would be great if the solo artist (pianist, violinist, etc) could be always listed as is the orchestra and conductor.

A lot of that depends on tge metadata coming from the record label. Some are very poor, I’m not a classical expert but even I noticed a DG album with almost none.

Ged is correct. This is “easily” corrected with a tagger app, but I imagine you want to avoid that.

I had dabbled with the MCUtils app but that’s for my local files.

Most of the albums I browse for are on Tidal and Qobuz - so I can’t control their metadata. That said, it is hard to believe they don’t have the featured artist when they have everything else.

Update—I just looked at the Album artist and credits in the meta data for albums missing the solo artists and the information is all there…and the same as for albums that do show it.

So I think the metadata is OK…Maybe a Roon quirk.

This is not a solution as I cannot imagine you would want to do this for your entire library but at least it is some kind of explanation.

It is not enough for the artist to be tagged as “Violin”, you also have to tag the violinist as “Primary Artist” for featured artist to appear in the compositions screen. This also controls whether the artist appears in “Performed by” on the main album screen. You can do this for local or streamed content. This example is for Qobuz. 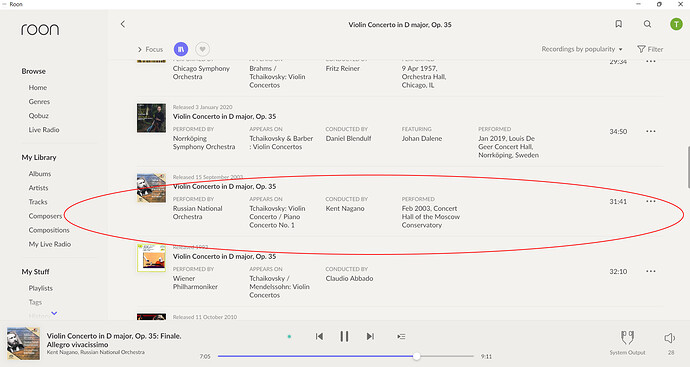 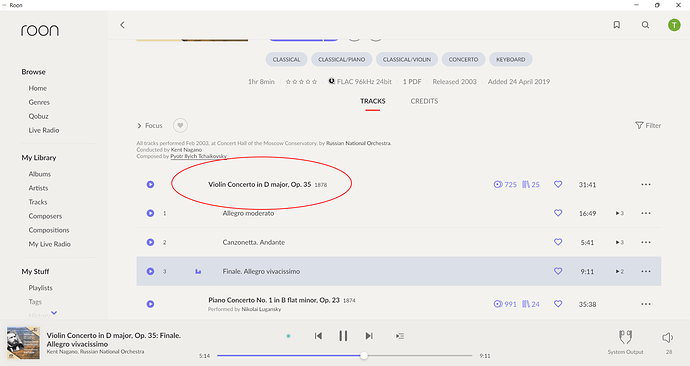 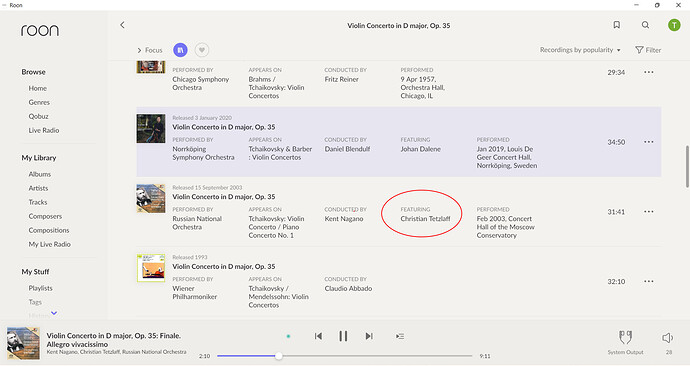 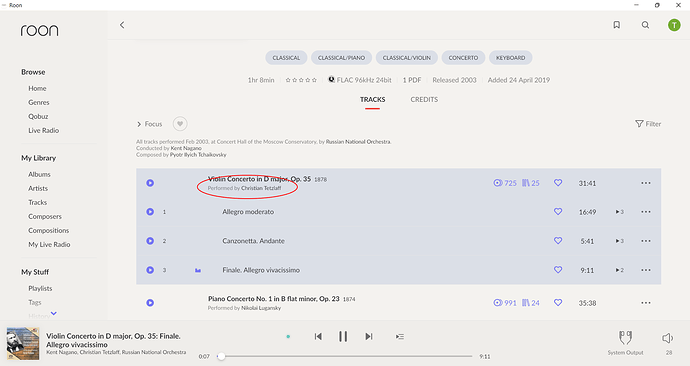 I tried that and couldn’t get it to work. In my first post screen shot above, they seem to all have the right metadata…and the violin artist listed as the primary artist and the violinist.

I can’t find the magic difference. Take the Gil Shaham example above where he is listed and the one directly above where Hillary Hahn is not listed. I looked at the two and don’t see what is different. I then tried changing from Tidal to Qobuz and nothing changed.

Ok. I have just tried the Hilary Hahn example: 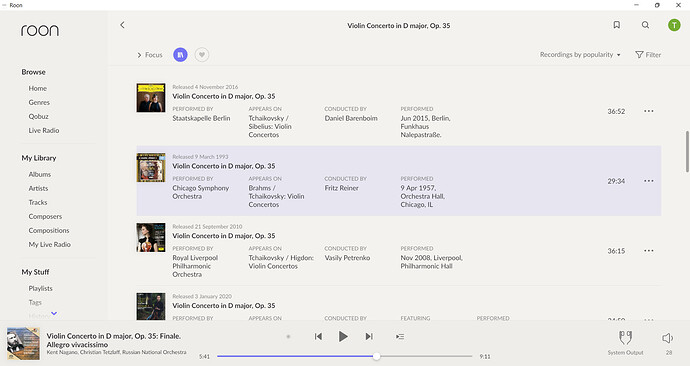 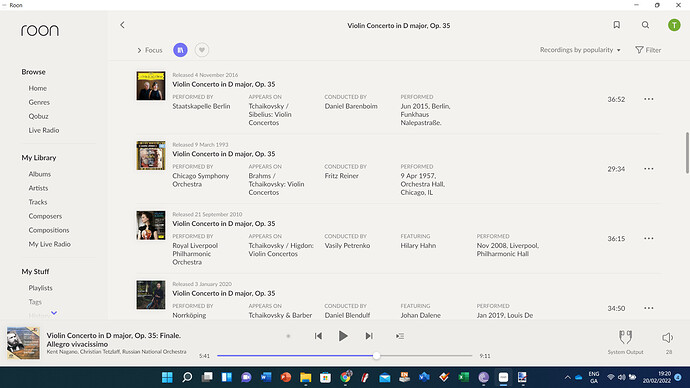 Are we doing the same thing? All I am doing is adding Hilary Hahn as a “Primary Artist” to the performance in the main album screen: 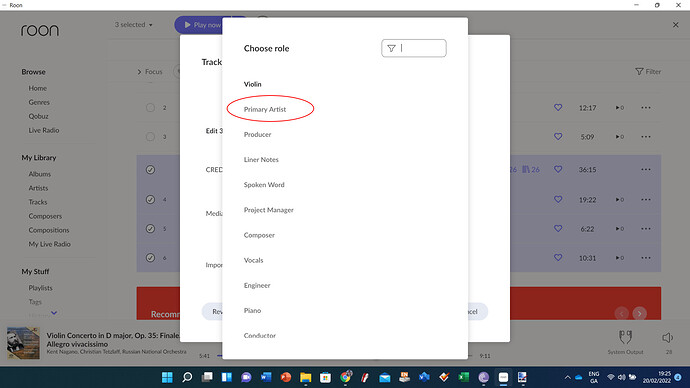 After doing this the credits for that performance looks like this: 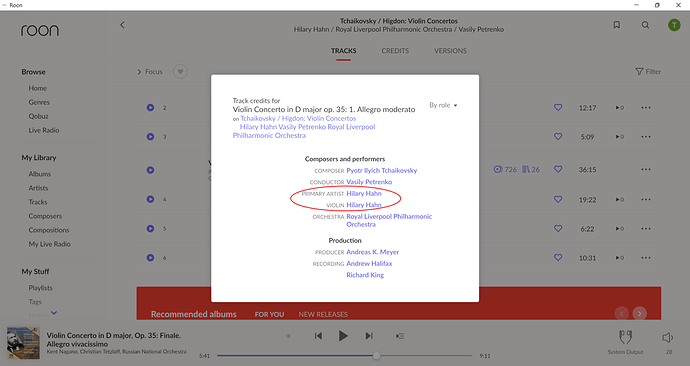 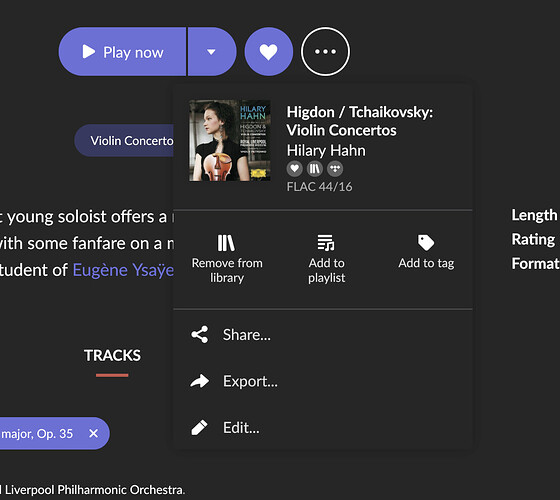 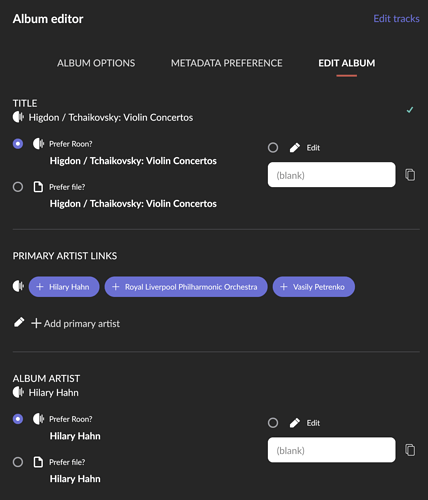 The above is from my own library version. If I switch to Tidal on the same album, I see the same thing.

Hahn as Primary artist is at the credits and album artist 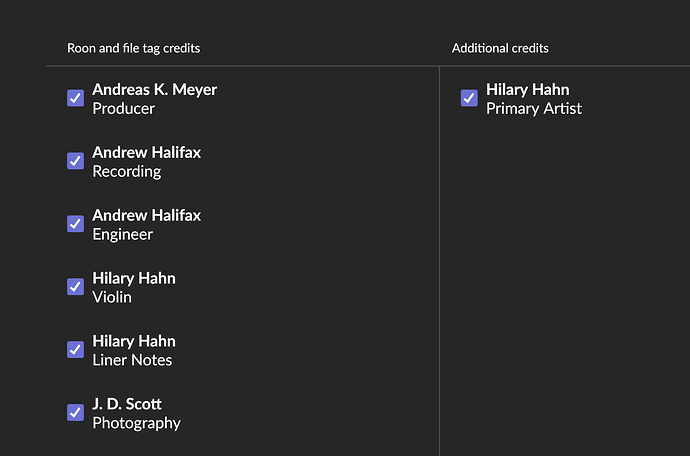 I don’t know if this makes any difference but I am adding the Primary Artist credit in the track editor, not the album editor. To access the track editior:

Yep….that’s it. So looks like the album metadata doesn’t all trickle down.

The key seems to be what roon is using as a source for “primary artist” from the meta data suppliers. There are of course no standards but there are “defacto” ones many in the industry follow. Roon goes its own way in many areas. Maybe things have changed but I remember looking into this years ago and concluding “primary artist” is a roon convention that is vaguely related to “album artist” the metadata suppliers generally use. I think the disconnect is there somehow.

I would normally say it is worth raising as a feature request. If it can be fixed or at least improved it would make a very nice enhancement to the composition view. But roon doesn’t seem to pay any attention to feature requests so probably not worth the bother.

It would take some thinking as to which to use…album or track… probably if track is empty go to album.

And thank you for your help.

It’s a shame there is no real solution. I can remember years ago when roon introduced the composition screen. There was alot of buzz by a handful who could see its potential but roon’s priorities were elsewhere so it is a long time since there has been a serious refresh.

But they get orchestra, composer, and conductor so why not the soloist?

But they do often get the soloist. So in your example of the Tchaikovsky Violin Concerto you will see many examples of Violin credits.

The problem is that in order for roon to behave as you would like in many screens (not just the composition screen), roon also needs a “primary artist” credit for the soloist. Primary artist is not a defacto “standard” with their meta-data supliers. It is a proprietary roon thing. I do not know how roon translates metatdata it gets from its suppliers into “primary artist”. It is obviously hit and miss. If you go back through the forum posts you will see quite a lot of confusion about what a “primary artist” actually is. I am still confused I must admit.

You could also probably argue, why if roon gets a violin soloist credit for a violin concerto it’s Valance AI doesn’t have the intelligence to have a rule to make a “primary artist” credit for the violin soloist if it doesn’t already have one. Good question.

There are a couple of apps out there to update your metadata…and some use the metadata providers like AMG and MusicBrainz (I think AMG is no more).

But your right…the lack of standards brings confusion. Looking at the above on Brainz (link) they have “violin” and not “primary artist” or “album artist” for Hahn.

And so does Roon…but the list is only Primary artist and nothing if blank. So…maybe simple code to substitute violin or piano, etc when Primary is blank.

However, Allmusic has her as “Primary Artist” here

That is interesting that allmusic has Hilary Hahn as primary artist.

I don’t know why roon doesn’t use it.

I do know that roon is combining at least two metadata sources as I get a great number of duplicate credits with variations on artist spelling that roon doesn’t seem to be able to correlate. For me, personally, even more annoying than your case. I don’t know why in certain scenarios roon is missing data from one of its sources and in other scenarios it is duplicating data from its sources. Classical in roon just seems very deeply broken.

From Hahn’s artist page, I clicked on her Discography and the above album we have been discussing showed up with her listed as the artist (although this is an album and not a composition) .

So then, if I search for just the Violin Concerto, amazingly, it has the primary artist listed for each one (but not orchestra, conductor, etc). Albeit in a different format. But it isn’t for lacking if metadata…it’s just that above listing that is missing the artist. Looks like it is a Roon shortcoming in the list above as it shows correctly here.

Ah! That looks like some kind of bug to me if roon has the data but chooses to use it inconsistently in different screens / different scenarios. On the face of it, it also looks like a relatively easy fix that has a significant impact on usability. A win/win for everyone. I don’t know if @support are following this thread. After your investigations several of us would be interested in a roon comment now.

I had put the same screen capture twice and I just edited it and put the correct one up on the second pic above. But the primary artist is not only on the album metadata, but also the tracks.