Can one explain to me how multiple versions are being sorted in the diverse views. I have set my roon to sort the albums within an artist by original release date. Now I would assume that multiple versions of the album would be sorted by the versions of the album get sorted by release date in chronological order, but that seems not to be the case. Right now it is mixed all together. Is that intended or is there an option for second level sorting?

I’m not entirely clear about what you are asking … do you mean how do releases appear under the Version tab or are you seeing different releases side-by-side in the Album browser?

It does not change when changing primary version. I would also expect same ordering in the versions tab.

Just a guess but it might be ordered by resolution - hence DSD first then by date in the CD versions?

However, I guess you’ve sorted by artist in the image posted. If you use focus you can filter by Artist and Date ascending/ descending.

Under the Versions tab I believe they are ordered by resolution and release date (newest first.)

No, roon sorts randomly, or maybe in order of import. There is no change on the version tab either, regardless what is in the release date: 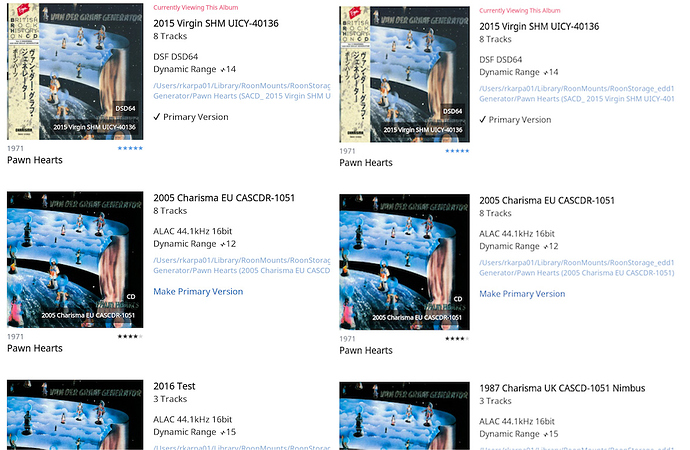 It’s not that I do not find the wanted album, but it is not consistent across the diverse artists. With three versions as shown here, it is not a bigger problem, but when it comes to more versions (> 10 or 15, it is not good - yes, I have > 15 versions of some albums). I know how to group/hide and use the focus, but that’s not what I am looking for.

Can one explain to me how multiple versions are being sorted in the diverse views.

@Ralf_Karpa without being overly snarky, I can say that Roon didn’t give much thought to sorting in views, presentations, search results, playlists, etc. It almost appears as if they have no interest in fixing what in their opinion might be minutiae. Or perhaps it is simply lost in the wake of all the other items deemed more important to deal with now; obviously…I wouldn’t know.

Aside from the examples you’ve given, this is a crippling weakness for those who are interested in live music, as they often have hundreds (thousands, in some edge cases [not me]) of live boots from lots of different bands. The term “file-hoarders” has been used pejoratively by at least one highly-placed Roonie to refer to types of users with this kind of ‘problem’ – that might give you an indication of how sisyphean proving the use case & asking for a fix might be. Or not…whatever & who knows and all that…

I suspect you’ll need to spend a lot of time researching the actual sort implementation Roon uses (if any), perhaps even varying methods on different screens, etc – and then craft a fix and submit it as a feature request.

I wouldn’t get your hopes up.

No, roon sorts randomly, or maybe in order of import. There is no change on the version tab either, regardless what is in the release date:

I’m not convinced. Every album I have checked under the Versions tab is sorted by resolution and Release Date with the first being my preferred version. Of course, it is grouped by local media and TIDAL.

That’s right, not only the version tab. And, whether convinced or not, I just shared the example in my last post. It is NOT sorted properly as I would expect.

Again, if this is intended to be “random”, then one from the roon team can simply state it. I am just trying to make sense out of my library.

To reiterate, every album I tried followed logic … maybe coincidence, which I why I’d like to see some examples. The artist view where your screenshots are taken are sorted by Original Release Date.

You have not shared a screenshot from the Versions tab.

The versions tab is shown in above post. I glued the 2 views into one picture so, it can be seen side by side. Left is - testwise - set to 2016 (still at the bottom), right is original setting with 1987.

The pasting threw me … side-by-side are the same view but with the 1987 title amended for testing? Nonetheless, the three listed on the right hand side reflect what what I see: first the Primary Version, then newest release and/ or higher quality in descending order. The 2016 Test is the 1987 release, so the order is consistent.

Yes, right side is the original and shows as I would (probably - if quality is taken into account) expect. I changed the credits of the 1987 album to 2016, so, it would be newer than the the 2005 version, but it is not re-sorted. Therefore the order is NOT consistent. It is just not changing as it should.

Possibly, but Roon may still identify the release correctly even though you have changed the date.

That would be even worse as the metadata roon uses are not really good. Lots of changes have to be applied, which is truly a pain (see my other thread about composers). If I remember correctly, during my tests I did this also with un-identified albums and it was same behavior.

@roon-team, any idea? Is there any further documentation on this?

Can one explain to me how multiple versions are being sorted in the diverse views. I have set my roon to sort the albums within an artist by original release date

I’m pretty sure we never designed any behavior here. It definitely doesn’t follow the sort options, which are for the browsers.

If you open a thread in #roon:feature-requests describing what you’d like, we can probably add something here.

As described in this thread, roon allows only for one sort level when dealing with versions. I’d like to ask whether it is possible to have this behavior changed, so it will sort always on Original-Release and second level on Release date.