Updated this afternoon to build 259 and it seems to me that the sound quality/tonality has changed. My system sounds “thinner” and tonality shifted towards emphasized highs, in one word worse. Does anyone else has similar observation?

I didn’t think there were any changes to the core playback engine in the last update so not really possible to change the ‘sound’. Maybe you’ve accidentally changed a DSP setting?
Maybe you don’t like the one click play so the dislike is a placebo of this dislike?

Thank you for your reply. The change of the sound is unquestionable since I listened the system last time. It is is possible though that the change in weather (almost constant rain and 20F drop in temperature) has an effect.

I for one don’t like the one clip play.

If anything I’ve notice an improvement with MQA. I’ve also notice a difference in how the signal path is displayed (TIDAL FLAC 48kHz 2ch, MQA 192kHz).

The difference being the additional MQA info: ,MQA 192kHz. Not sure what that’s telling me, maybe I’m actually hearing the unfold thru my Bluesound Node 2, as I should? 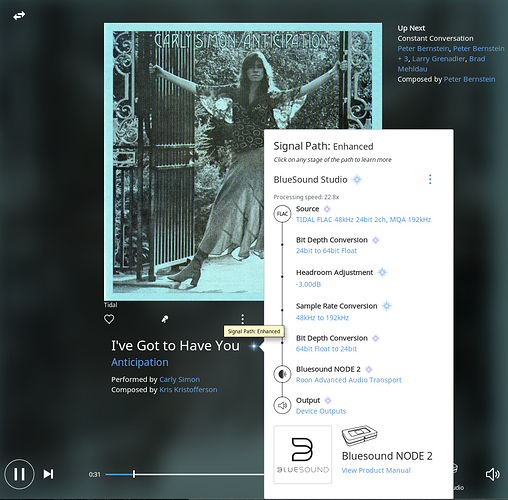 Does anyone else has similar observation?

No change on my system

All’s well with my system, too.

No change on my system either.

Thank you for all of your reply. Good to know what I hear is specific to my conditions.

Yes. I discovered yesterday that the siund became thiner. My other player sounds much better than Roon now

I had a few beers last night and my system sounded amazing.

However, with a slight fuzzy head this morning it wasn’t quite as amazing…

Placebo effect is quite strong any time you are made aware of any change, or new version.

I looked in the mirror and find that I look distinctly thinner since the last update.

Except that I wasn’t aware of any change … he he

Are you using a USB DAC directly connected to Roon? Or via network?

What CPU / GHz are you running Roon on?

I am using Ethernet cables from a Mac Mini to the router and from the router to a PS Audio Directstream DAC. The Mac Mini has an 2.3Ghz I7, 16G memory and 256G SSD Drive.

BTW my system sounds still “thin” even after the rain stopped for three days and the temperature is getting close where it was (My working theory was that the humidity and temperature change impacted the membranes of the speakers, but it does not look like that theory is working.)

Does anyone know how to switch back the previous software version?

It’s near impossible for this new version of Roon to have made your sound become “thin”, so long as no DSP or EQ settings were changed. Since there were no changes to the core playback engine (at least none described in the release notes) how could the sound change?
The most likely answer is a change to a more fundamental part of your system as a total. Maybe you’ve blown a woofer?

Hi Janos,
in the past I had an experience that you describe. My dealer of a sytem with Archlinux distribution and Roon installed discovered that Roon was running in a kind of double mode. No idea if this problem could occur at any other installation. Something probably had gone wrong during updating leaving the old version active. Instalation of a fresh image and redoing the update solved the problem.
kr Edwin

May be I missunderstood but I believe that some optimizations have been made on this release to use specific hardware CPU instruction to allows the DSP to run faster. So, if it’s the case, we cannot say that there’s no change in the playback engine ?