I am running a trial of Roon and I am having significant sound quality issues. Specifically, the sound is overly bright and harsh sounding, lacks warmth and is not enjoyable to listen to. Complete system is described below but I am using a Sonore ultraRendu (using most recent Endpoint version) as a Roon Ready Endpoint and when I switch back to MPD mode and use MPD as the music player, the sound is fantastic, not a subtle difference compared to using the uR as an Endpoint. Please note that my son also uses Roon on the same network, using Roon server on a Linux computer and Roon Bridge on a Linux computer, and he loves the sound.

The system configuration is Roon Core is on a 27" iMac (late 2013) with 3.2 GHz i5 processor and 16 GB RAM, Roon 1.5 (build 339, 64 bit), I am using a MoCA 2.0 network to provide fully wired access to rooms, the iMac is not in the same room as my stereo system. In a closet in my listening room I have the MoCA 2.0 network adapter which connects via Ethernet to a Netgear switch. To this switch is connected my NAS (music storage) and the ultraRendu. When using the uR in MPD mode the NAS and uR are all on same local switch whereas the iMac needs to go through MoCA network. Note: my sons system also must use the MoCA network. The ultraRendu connects to an ultraDigital which in turn connects to an Ayre QX-5 Twenty DAC using S/PDIF input (BNC). As I said, just switching playback mode of the ultraRendu makes a huge difference in sound quality. I can’t believe this is as good as Roon gets and there must be some other problem going on. Is the iMac too “noisy” and I should try setting up a ROCK in my listening room or is the ultraRendu not a good Endpoint? I really would like to give Roon a serious chance before giving up.

Another issue has to do with the iPad Control app. The app crashes a lot and there is always a significant delay when you wake the iPad from sleep mode. The behavior of the control app really takes away from the enjoyment of using Roon, very frustrating. This is running on an iPad Air 2 with iOS 11.4.1.

If I can’t get these issues resolved, Roon is obviously a no-go for me.

Rahul (who you tagged) works for Allo, so this wouldn’t be applicable to him

I’ll tag Roon @support and Sonore @Jesus_Rodriguez for their information.

Not sure why that happened as I tagged support but that name came up. Thanks.

When using the @ symbol The site brings up a list to select users from, looks like you inadvertently selected the wrong user. I’ve updated your post so Roon support will now be notified.

Hi @Robert_Daines ---- Thank you for the report and sharing this observation you have made with us. The feedback is very appreciated and sorry to hear of the troubles.

Moving forward, I would first like to make sure my understanding of the issue and your setup is correct. Kindly verify that I have the information listed below correctly:

The setup currently having the issue:

@eric Thank you for your response. I will try to answer your questions the best that I can.

I think you understand the problem correctly. To be clear, the ultraRendu is in its Roon Ready mode and shows up in the Roon audio settings as a Roon Ready device. My iMac does not have an SSD only a 1TB HDD. My NAS is a Synology DiskStation 216. As requested, a screen shot of the signal path is below. I should add that volume is set to fixed (100%) and DSP is disabled. My QX-5 does not have a network module so I cannot play Roon directly to it. 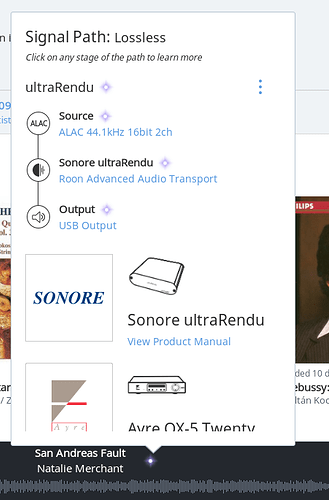 I have reinstalled the iPad app, let’s see how it goes from here. If I can’t improve the sound quality, then app behavior is moot. Thanks!

Thanks for getting in touch and taking the time to answer my questions @Robert_Daines, very appreciated!

In an effort to isolate some variables here I would like to recommend the following tests to see if we can trigger a change in behavior here. Kindly see below.

@eric thank you for your suggestions. I am tagging @Jesus_Rodriguez on this reply since I am confused by what I have found. I turned my MacBook Air into a Roon Bridge (running on battery, Ethernet) and connected this to my QX-5 via USB. I left the ultraRendu > ultraDigital > S/PDIF in place and grouped these two zones so that I could switch between them using the QX-5 remote. The two sound noticeably different with the ultraRendu Endpoint sounding “brighter” as I previously observed. What is confusing about this is that the uR as a Roon Endpoint sounds “worse” than the uR/mpd combination and the MBA Bridge. It is disturbing that Endpoints sound different, I didn’t think that they did much other than pass the music stream through to the DAC. The signal path using the MacBook Air is below. One of the driving forces for me to try Roon was because I could use my uR as a Roon Endpoint assured that it would provide great sound quality as it does using it on its own with mpd. Any suggestions on how I can get the uR to sound better would be welcomed and any explanation that explains my observations would be appreciated.This does complicate things… 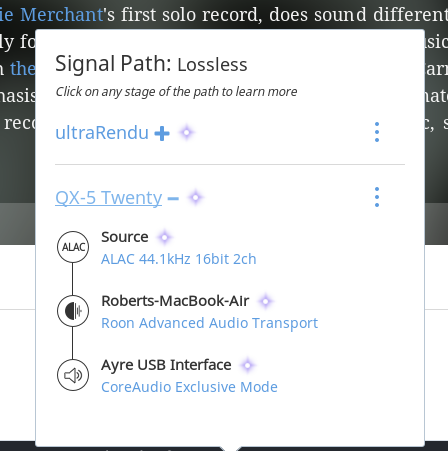 Hello Eric. Well, the last few weeks have been a frustrating journey with Roon trying to achieve acceptable sound quality, but I am nearing the end of the road with Roon. Unfortunately, I have not been able to solve the SQ issue despite what I feel has been great effort on my part. What I am hearing can best be described as a tilted up balance, frequencies from the midrange up sound like they have been boosted. Initially I had Roon core on my iMac and tried using both an ultraRendu as a RoonReady endpoint or a MacBook Air with Bridge (both directly attached to my DAC via USB). I then converted a NUC5i3 into a ROCK in order that I could put the NUC, my Synology NAS (music files) and the ultraRendu all on a single Netgear switch local to my listening room. None of this changed the fundamental sound character that I was getting from Roon. I even tried a fiber optic network between the switch and the ultraRendu with the final FMC powered by a linear power supply. I then listened to Roon exclusively for a week or more, no fiddling just listening to music. The other day I was listening to Elton John’s Goodbye Yellow Brick Road and it occurred to me that I have not been enjoying my music. I have been listening but not hearing or feeling the music. I forced myself to listen to the entire album and then played “Bennie and the Jets” again. This will never be a state of the art recording but I didn’t remember it sounding this bad. I then put the ultraRendu in MPD mode and listen to the same track played by MPD on the ultraRendu. It was jaw dropping, the track was quite listenable with this combination, the vocals sounded correct and the higher frequencies were not burning through your head like a laser beam. The only difference was playback by Roon with the ultraRendu as an endpoint vs. playback by MPD on the ultraRendu. This difference is demonstrable, I heard it, my wife heard it and my son heard it. I used only MPD yesterday and for the first time in over a week I was moved by the music (Tchaikovsky not Elton John).

There is clearly something wrong somewhere, however I am at a loss where to look at this point. The signal path has never indicated anything other than lossless with purple lights. As I mentioned at the beginning, this has been the basic sound character that I’ve heard from the very start. Nothing that I have done has really altered the SQ in any significant way. Unless there is anything else that you can suggest, I am afraid that Roon will not be a part of my future. Quite disappointing.

Hi @Robert_Daines ----- Thank you for reaching out to me and my apologies for the delay on my end.

The update and continued feedback, both are appreciated! I have a meeting with our tech team later this week to discuss any pending support threads and plan to share you observations to if the team has any thoughts on the matter. As mentioned previously your signal path leaving Roon is indicating a lossless signal which is what we want here.

In the meantime you mentioned in one of your previous posts that you are not using the DSP engine but do have volume control set to “fixed” (100%) have you tried to adjust this setting or any other of the playback settings for the UR + QX-5 zone since reporting this behavior to us?

Hi @eric and thank you for your reply, I was starting to lose hope for any follow up. As far as the volume setting goes, I have used both “fixed” and “device.” There is no difference between them as the QX-5 is set to DAC mode which fixes the volume at 100% regardless. Just to confirm, I am using no DSP and, in fact, have not touched any settings on the DSP Engine screen other than to turn off DSP at the top. I should also add that I have only been using PCM files ranging from 16/44.1 up to 24/96.

I use a microRendu myself and haven’t had the issue you describe. It may be that the Roon Ready app on your device is glitched in some way.

Actually, as I previously stated, there is little difference in the sound character whether I use the ultraRendu or a MacBook Air running Bridge. Sorry, but I don’t think the issue is the ultraRendu.

So that I do not dismiss any reasonable suggestion, I did the following: Since I keep a disk image of my microSD card before each update, I put a new disk image on a microSD card from an earlier version of RoonReady (V 1.1.30). I booted the ultraRendu and listened to Bennie and the Jets which sounded as it did before using Roon. I then ran an update on the ultraRendu which installed RoonReady V 1.1.32, I had previously been using V 1.1.31. After rebooting, I once again listened to Bennie and the Jets which may have sounded a little better than V 1.1.30 but still exhibited the perception of a tilted up frequency response: voice harmonics are over emphasized and upper frequencies sound washed out.

Hi @Robert_Daines —— Thank you for the follow up, but more importantly, thank you for your patience here.

I had a chance to catch up with our technical team and I first wanted to reassure you that Signal Path should always give you clear feedback about anything Roon is aware of that might be affecting audio playback. While sound quality is subjective, we don’t know of any reason you should be hearing a difference when using MPD vs Roon.

Obviously, sound quality is open to interpretation, so my advice would be to trust your ears. It seems like things are generally working here, but if there’s anything else I can look into for you, let me know. Thanks!