The Mac Mini Roon Server has DRAGONFLY DAC attached, which then feeds to a Cambridge CXA60 via RCA cables.

I installed Roon on my iMac and MacBook Pro, which connects to the server (Mac Mini) just fine. I can see my entire library and all my tags, etc. Each time I play a song it starts out playing and sounding great, but within 1 to 2 minutes it stops and no music is playing anymore. The Cambridge CXA60 is still on the proper input and the Roon app shows the song still playing, but I can’t hear anything. It has happened over and over since the beginning of June 2021. I reinstalled the Roon app again today, but no luck. Any ideas? Screen grab attached. 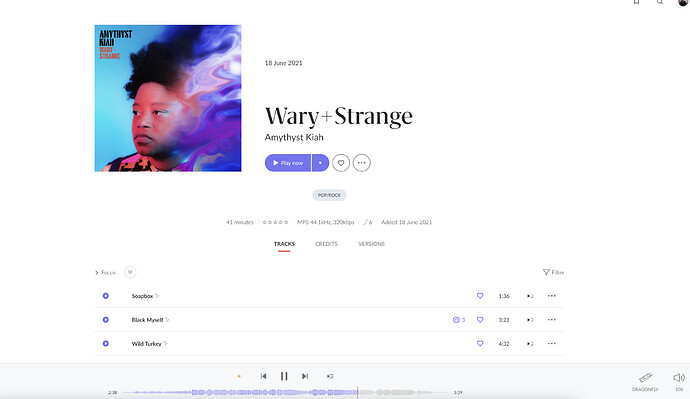 Hey @Jason_Boucher, what kind of content are you playing? For example, is this happening on streamed content only or does it happen when you’re playing files in your own library (if you have one)?

Does this happen no matter what endpoint you’re playing to? What about if you play to your system output - does anything change?

Are you using a remote that has a sleep mode, or does your laptop have a sleep mode that might be triggering this?

Have you added any new gear or any apps to your system around the time this started?

Hi @kirsten – I am playing music (files) from my own library, just as I normally do. It happens on the DRAGONFLY consistently for the last 2 weeks no matter where I access it (iPad, laptop, iPhone, iMac). I am not using a remote or have sleep mode on. It’s weird, it just started happening about 12 days ago, but before that, no problems. no new gear added or apps. It’s very strange but annoying. Thanks for the questions.

Does this mean that it corrects itself from time to time? Is there anything in particular that you can do to force a fix, or is it essentially random?

An effective way to troubleshoot this is to simplify your setup so we can add components one at a time and see where the problem starts. For example, can you start by playing direct to your system output (avoiding the Amp and all of its connections) and see if the tracks play all the way through? If they do, we can begin adding components back in one at a time to see what happens and where.

Let me know whether you can force a fix (and how) and what happens when you play directly to system output. We’ll have some more suggestions based on those results!

it has not corrected itself since it started, so I have switched to just using iTunes sadly, but at least I don’t get interrupted anymore. I’ll try once again and try other outputs, thanks!

What about non mp3 formats?

Hi @Jason_Boucher I have another configuration to try. I see your Dragonfly DAC is connected to a Cambridge. Can you plug your headphones in directly to the Dragonfly? Let’s see if it works without the other DAC involved.

Everything, does not matter what the file is.

Hello @Kristen_Peters - I unplugged the RCA and plugged in my headphones directly to the DRAGONFLY and it still stopped playing in my headphones even though ROON still shows the song as playing, just as it did when connected to the other DAC (Cambridge). I did try other outputs, like the iMac and it worked and did not stop playing, seems to be only the DRAGONFLY output and anything associated with it. Strange… this is all only started happening in the last 2 weeks.

Try the DF in a different USB port and remove any cable maybe if you are extending it.

Remember to ALWAYS shut down your Roon Core before copying, moving, or accessing your Roon database. macOS Core Open Finder and click Go in the top bar Hold down the Option key (or Alt)(⌥) to unhide the Library folder Click the Library...

I assume you also have restarted the Mac after a full power down.

@Jason_Boucher Thanks for working with us on this. One more simplification: Can take the Dragonfly out of the mix by connecting endpoints or your headphones directly to your Core or routing it through the other DAC? It reall feels like the Dragonfly may be the source of the issue.

Meanwhile, I’m checking into another possibility here where I’ve seen similar behavior but I can’t remember enough details without doing some research.

5 posts were split to a new topic: Sound stops but track keeps playing

Thank you @kirsten – Here is the link to log files and RAAT, if needed: https://drive.google.com/file/d/11iDTHaa0w3O72PJvRxfQix4VYwseIJx5/view?usp=sharing

11:17 AM EST - Ocean Feeling by Molly Lewis (paused and then stopped playing)
11:21 AM EST - Ocean Feeling by Molly Lewis (stopped completely)
11:23 AM EST - Ohio by Wild Pink (stopped and gave a message below than disappeared too quickly, but said, “An audio file is loading slowly…”)
11:24 AM EST - In the Rain by Rose City Band (I pushed play, but nothing happened, except the play button became a pauss button, even though nothing was being played, or heard)

Thanks very much to both of you. @LMP and @Jason_Boucher. We’ll take a look and get back to you as soon as possible. Just so you know, our team is short-handed this week so it may not happen as quickly as I’d like, but we haven’t forgotten you!

Loren, I don’t wish for the problem to recur, but if it does, I’ll appreciate the info!

A post was split to a new topic: Sound stops after a minute, Roon keeps playing

I bought and installed a brand new Dragonfly Red, replacing the DragonFly Green, and I also restarted my ROON server. I played a track from my library to the new Dragonfly Red and 0:58 seconds in, it stopped and nothing is playing now. The play button is grayed out, so I need to change inputs or restart Roon once again. I wish this was fixed, or at least known, as it’s really preventing me from re-subscribing since I listen to 95% of my music this way. Thank you for all your help!

@Jason_Boucher @kirsten @beka @dylan
I am having the same problem for well over a month now; I started a seperate thread on it, but haven’t heard back from anyone for over a week, despite prompting for a reply. I’m generally a very patient person, but I’m starting to get very angry with the lack of “support” from support. I don’t want enhanced functionality, I just want basic functionality; the ability to play my music!!!
Can I get some support please?!
Yours in frustration,
Steven…

Steven, I’m sorry you haven’t been hearing back promptly on your separate thread. It looks like Dylan replied to you yesterday afternoon.

@Jason_Boucher @Steven_Hinchliffe @Michael_Poon @LMP
I’ve seen this symptom pop up from time to time. Trouble is, the causes are not the same in each case, so we have to look at each one individually. That can take time. I’m going to split these out today so we can keep from getting symptoms, setups, and solutions mixed up with each other.