Several of the soundtracks in my local library have their Album Artist identified as Original Soundtrack/Original Movie Soundtrack/etc. rather than what is listed on the album cover.

Now I may be in a minority, and be one of the few people who still submit data to Last.fm, but as you can imagine…having the track artists submit as something other than the composer/performing artist does tend to mess up those statistics somewhat.

I suspect this is primarily an issue with some of Roon’s metadata sources (in my search for a solution to the issues, I know that AllMusic lists the Album Artist of The Greatest Showman soundtrack as Original Soundtrack, for example).

In general, I’ve had no issues with 99% of my library, but the handling of soundtracks is causing issues.

Would you mind sharing some screenshots of examples of this?

Certainly…see below screenshots of The Greatest Showman as identified in Roon (before I edited it to fix the issues), and the resulting entry on my Last.fm profile

It identifies the track performers, and that’s the data I would have expected it to send to Last.fm, but as you can see, it doesn’t.

Checking a few others, I discovered it’s also doing something similar to the Ghostbusters soundtrack, although this time, it sends the artist as [unknown] 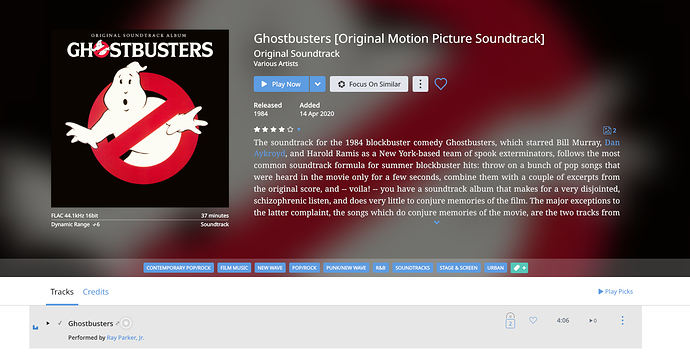