I’d love to see a change in the way Roon boots. Right now it takes some 2-4 minutes and with the Metadata improver error, Roon often needs another reboot. My Core’s have libraries on local storage (USB or internal) around 100K tracks, and some 4-5Tb of data.

So, please allow Roon to be accessible before starting to scan for changes in local and online sources.

And the authorization process really shouldn’t need 2 minutes when that kicks in?

Agree with speeding up startup.
Eg Though there is no comparison to bluesound, Roon light years better for my personal needs, bluesound App does always look like it’s always on instantly.
H

My i7 with hybrid disk and 6GB used to be quite slow for Roon start up. I switched to SSD and 16GB it was huge improvement not just for Roon.

Thanks for chiming in Carl, the MBP is quite quick in most aspects, however it surely isn’t a portable workstation.
Its internal harddrive is an NVMe PcIEx drive (as fast as they come) and the CPU is a reasonable compromise between battery longevity and power, 2Cores 4thread i5@2.3Ghz.
So it really should not be up my choice of hardware, but of course…
Still, throwing hardware at inefficient software is not the way to go imo.

Carl, hi, why is there a slightly annoying blank screen when I click on Roon on my iPad when coming back to it after a while? The duration varies as well. Is this my network?
Cheers
H

I not a Mac user so can’t share how to check, but I suggest checking to see how much free RAM is available when Roon is running.

(My Win10 system with only the OS and Roon running is using 64% on 16GB. Before I upgraded the RAM it used to be paging a lot and hence poor performance.)

I hear you re. throwing hardware at a software problem … it’s a ballance I have to make often with my day job (enterprise level logistics systems) but often more performant hardware is the only way to solve the issue.

That said I too believe Roon search function is too slow and often does not yield good results … but I have seen some improvements and I trust there will be more to come.

The network is a factor and also what iPad version you have (I have iPad Air 2) and with each iOS version update it is becoming more and more “laggy”.

There is an option in Roon’s settings to keep the Roon screen open … try that … though it does mean the batteries are hit harder.

Hi Carl, thanks for tip, sorry I had a look at Roon settings and went through every one but I could not find the setting you mention above ? 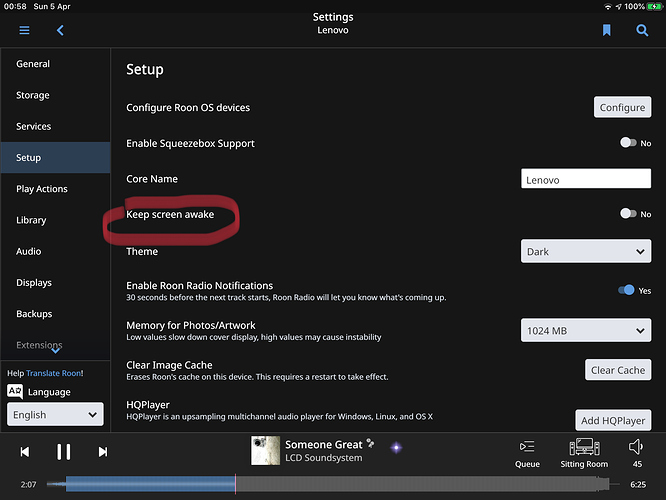 Last time I booted the Core was in May 2017, as I recall it was pretty snappy.

Good for you, house dweller!

But for those of us still not caged, Roon does NOT provide a mobile solution…

Therefore i have a need for a transportable Roon-system, which per definition is unsuitable to keep powered up at all times.

And, i’m pretty sure your Roon core has been restarted quite few times since 2017? Or are you still on Roon 1.1?

Technically, of course an update requires a reboot.
And there are other events like power outages.
But I’m making a deeper point: I never rebooted it.
Yes, I approved the update, but from a user perspective, I don’t know what is going on there, did it reboot, restart, do a hot patch — I don’t know or care.

My point is that we are often stuck in thinking that derives from an other technical era.

There is a thread about having a real Stop button, instead of Pause. But that comes from tape and cassette decks, where Stop was slow to restart and didn’t preserve position well but Pause kept things rotating with wear and tear. We don’t have that difference. The real request is to get the queue emptied when I stop playing, but why? When the system isn’t playing, what does the queue matter? When I want to play a new album, I hit play and the old queue is wiped. There were some complex queue management scenarios, either they are valid or not, but they are not about Stop vs. Pause.

People talk about having default settings for this and that. But a default is about what happens when you restart/reboot. When you come to the system and it is on, it simply holds its current value. What if it doesn’t forget, ever? What if all state is remembered, across reboots? We could eliminate the very concept of default, just have everything remembered.

With modern operating systems we are moving in this direction. On iOS, when I click on an app icon, it comes up. Was it shut down, or just paused? Who knows? There isn’t even a shut-off button (yes, there is a secret handshake but I bet there are several billion users who don’t know it). The app may have been shut down, and it’s resources scavenged by the OS, but if the app is correct it should have preserved its state and you can’t tell the difference.

Some apps don’t do this right, and then you see different behavior depending on how long since you used it, which is counterintuitive and annoying (e.g. YouTube).

In fact, this shift in thinking was one of the big problems in moving classical Windows apps to a tablet platform. Classical Windows does not hide the physical reality from the user: an edited document is not preserved unless you save it to disk, the undo queue is not preserved, this whole concept of Save is just about exposing a hardware cost difference (RAM vs. HD). Making classical apps behave in the modern way was forbiddingly difficult; together with other differences, it was easier to write new apps than to adapt them.

And it isn’t just computers. My car has a Start/Stop button. Why? The car is perfectly capable of restarting the engine on demand, does that at traffic lights. And why does it have a separate parking brake? And the wireless key is in my pocket. Why don’t I just walk up, step in, select forward or reverse, and go? That’s how the Tesla works. “Yes, but the Tesla electric, a gas engine has to be started first.” Yes, but not by me, it should be automatic.

Sometimes we need to preserve resources, like shutting down a car engine — but we have auto-stop/start. Or the smart iOS behavior of apps preserving their state when scavenged.

In Roon’s case, the remote inherits the behavior of the OS — iOS is different from Windows and MacOS. The core runs on a classical OS, but with the Nucleus the team has focused on making the idle energy consumption very low.

Yes, Mikael, we are not there yet for mobile solutions. Not just Roon: my Chord Hugo2/2go, which is my portable Roon endpoint around the house and the garden, requires that I turn it off when I don’t use it, otherwise batteries run out quickly (unlike the iOS Roon remote). But we will get there.

Luv it and agree!
Is the corollary though that configuration rules become huge? The iPhone configuration options have reached nightmare stage. Who can actually remember their privacy settings between apps and devices? With the taperecorder there were maybe 5-6 things to configure.
H