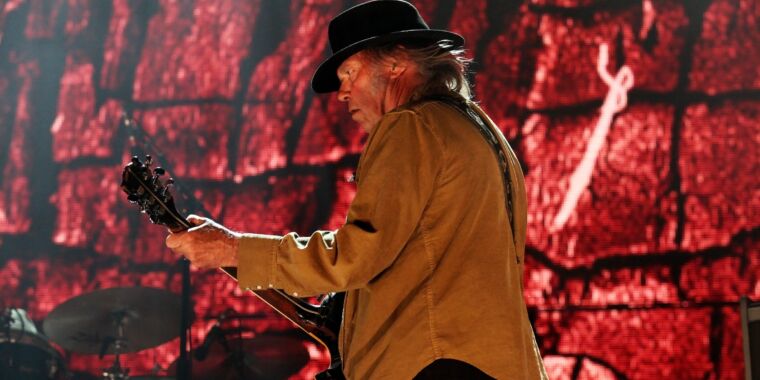 Dunno if they dropped him so much as complied with his request to be taken down (vs the condition that he presented them with to drop their $100m host).

Well, it shows Spotify choosing non-music over music. Whatever brings in the bucks, I guess.

To be honest, it’s surprised me a bit that a significant portion of the younger, socially aware music-following (non-audiophile, concert-goer, Spotify listening) crowd hasn’t made a bigger stink about Rogan being on Spotify, but I guess he’s been fairly Teflon thus far.

I guess I don’t really care anymore if Roon doesn’t add support for Spotify, but I still hope it will support YT music. No podcasts there.

Hats off to Neil Young.

it will be interesting to see if anyone else follows suite

I kind of doubt that. Spotify is a huge channel. Neil Young will always have his Neil Young Archives…

Hats off to Spotify.

Thank God some companies still allow free speech to exist. You don’t have to like it or listen but you shouldn’t stifle it like the other social media product have.

Spotify say that they have removed over 20,000 podcasts over Covid misinformation so far.

Musician has condemned misinformation on platform’s top podcast, saying ‘they can have Rogan or Young’

If someone gave me an ultimatum I would let them go too. I like both Rogan and Young, and will continue to listen to them both as I like what they produce, and don’t mind having different opinions to other people.

No, Neil Young drops Spotify. Fixed it for ya.

He takes a stand, puts his money where his mouth is and doesn’t back down. Deserves respect.

Thank God some companies still allow free speech to exist. You don’t have to like it or listen but you shouldn’t stifle it like the other social media product have.

When a company pays most off its ‘employees’ (i.e. artists) pennies but then gives one blowhard a 100 million dollar contract, it’s no longer about ‘free’ speech.

There are numerous limits on free speech when it comes to public safety and honesty. You can’t yell fire in a crowded room when there is no fire. You can’t dishonestly defame someone without the potential to lose big lawsuits. I could go on. Any company has the right to set the limits on what is allowed in their products as long as it doesn’t violate any laws. All social networks do this. There is no constitutional right for anyone to say anything anywhere regardless of what many seem to think. That view of free speech does not exist and never has.

this really isn’t a free speech issue at all - I think we , Neil and everyone are grateful we live in a country were we can make our opinions heard - the issue is, the spreading of misinformation - there’s a big difference -

Exactly @Craig_Palmer. Many people (at least in the US where I am) seem to very much misunderstand “right to free speech”. The term gets thrown around a lot, but many seem to not understand that the constitutional right to free speech has to do with government entities restricting free expression of ideas. It has nothing to do with private individuals or companies restricting speech of any kind.

If this thread moves heavily into the political arena it will face the possibility of closure.
Please keep it civil and sensible and within forum guidelines.
Thank you

I thought Neil young had sold his music? It’s easy to pick a battle when you don’t earn the revenue.