I can’t extract the feedback tarball. That usually is not a good thing.
Can you ask hem to restart the unit?

Yes I would recommend that. It won’t change much, becuase you’re already running most of the released stuff anyways.

He did that a few times already

I can’t imagine both SD cards decided to die at the same time of this update.

I’ll guide him through a clean image install on the SD cards next weekend.

Ok. You’re log shows that the unit is trying to download a picture form the server which is not there. Can you try with a different track and/or zone?

And then send me feedback again?

So both units show a flashing progress bar???

Then again, the chance of 2 different SD cards dying at the same time is not exactly zero, so maybe it is really bad luck

Let’s see if anyone else reports this over the next few days.

I’m gonna create a build for you with a little bit more debug info, as from the logs everything seems fairly normal.
Will be gone for a few hours, but will get back to you today.

Thanks Harry. I am running stable on my endpoints and beta on the displays. Notwithstanding a few ROCK reboots, no issues so far. I appreciate the troubleshooting.

I turn it of in the evening and also turns my nuc with Roon ROCK off and two mornings in a row the panel is lit up and saying no connection to Roon. This started since I upgraded to 160

Can you have a look for me in the settings (advanced tab) what your reboot schedule is?

I will check it later this evening. 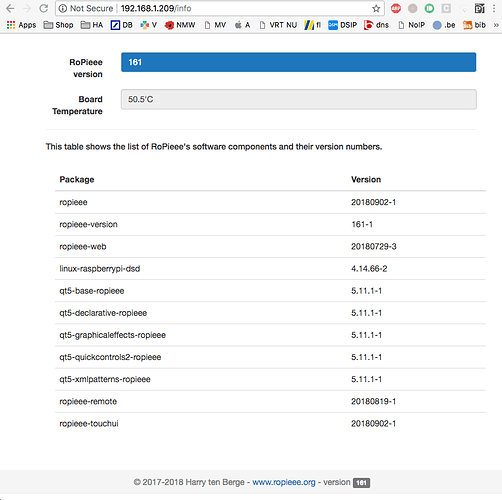 To be clear: you see ‘no pics’, but can I assume that the other info (track, progress etc.) isn’t there either?

Ok thanks. Then I can test this scenario as well.

With the last versions there is no need to reboot the unit, so a simple solution to your problem would be to put the reboot schedule to ‘never’.

With the last versions there is no need to reboot the unit, so a simple solution to your problem would be to put the reboot schedule to ‘never’.

I allready did that but thanks for the tip

You’ve set the controllable zone to ‘ropieee1’, but I don’t see a zone with that name.
So that’s not gonna work. Can you change that to an existing zone?