Smallish release, but it’s rather cool so I didn’t want to wait any longer.

This release has one feature only: native DSD on the mighty Nagra DAC family.
I’m not sure how many people have such a machine, but here it is

A big thanks to the Nagra team for getting this to work.

I’ve rebooted my ropieee devices several times, but they don’t seem to want to update to this (still showing 233). I’ve tried downloading a new image to flash, but the ropieee download site is so desperately slow that even the xz version is showing 2 hours to download.

Is it possible that this new build caused the display to not show what’s playing? I’ve done a couple of new RP/HiFiBerry Dac+ Pro/7" display builds over the past week, and this latest build doesn’t show the GUI, only the Welcome to RoPieee screen at stage 43 (running).

I haven’t yet had the chance to swap SD cards with the different versions to test, ran out of time tonight. Just thought if it’s potentially the build or if I’m missing something in configuration.

@spockfish: Another clue: In setup, version 253 installed on my most recent RP/HiFiBerry Dac+ pro/7" Display does not show the display tab, although the display is connected and working in character mode. Ver. 248 does show the “Display” tab in setup. Hardware is identical in both cases, only the RoPieee version is different. Possible this is a regressive bug?

No it isn’t. Every version is tested, including a display test.

I expect there was an issue with the internet connection during install (the display software is being pulled in upon detection).

Can you send me feedback (it’s on the advanced tab). I’ll have a look then.

Just for referance, My RPi with display updated and works fine…so 253 appears to be fine. YMMV

Yes, I rebooted my other device and 253 loaded and it works fine. Looks like I just need to re-flash my SD card and start over.

Sorry Harry, but i cannot seem to get Roon to recognize my Nagra HD DAC as DSD Native capable? Or am i missing something? 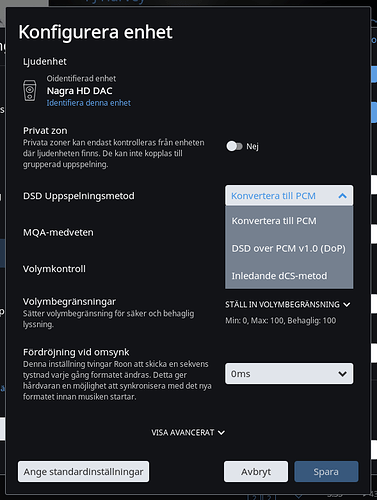 Yeah… it identifies differently. The guys at Nagra tested this with a Nagra DAC, and not an HD.

I need to check with the Nagra team. I’ll get back to you asap.

@spockfish - I re-flashed and all is well. Sorry to bug you - keep up the great work on RoPieee!

I’ve reached out to the Nagra team and they told me that there are 2 versions of the Nagra HD DAC.
The ‘old’ one and the upgraded one. You have the old one, which is capable only of doing DoP.

Alright, thank you for the response Harry! It’s not an issue though, sounds pretty convincing with DoP also!

I can imagine that. Awesome hardware

And, kudos to Nagra. Not all manufacturers (ahum) take care of their Linux-based customers like they do.