This one turned out bigger than I anticipated, so here’s a disclaimer first:

With that being said, there are a few highlights in this release:

Furthermore some ‘under the hood’ polish, where probably the main thing that stands out is the size of the image which has been trimmed. And with that also installation time, as over time there were more packages being downloaded during installation which takes considerable time in places where internet speed is not optimal.

There is also a change in deliverables: in stead of providing both images for ‘regular’ RoPieee and XL, you now will find only ‘regular’ RoPieee images (and obviously you can upgrade to XL from within RoPieee). And I’ve been starting to use a proper CDN for delivery, which means that there are no more “slow download” reports for RoPieee images.

As usual here’s the complete changelog:

Looking forward to it, thanks a million - you are tireless!

No more than 5 minutes to update … everything is working fine!
Thanks a lot

Music plays for a few seconds, then stops.

Any idea how to fix that?

I suspected there should be a configuration option for bluetooth under “Advanced”. There seems to be one, according to the guide, 1i). Unfortunately, I don’t have any. Tried Chrome and Firefox, cleared the cache.

Raspberry Pi 4 Model B Rev 1.4
Upgraded from the previous release. 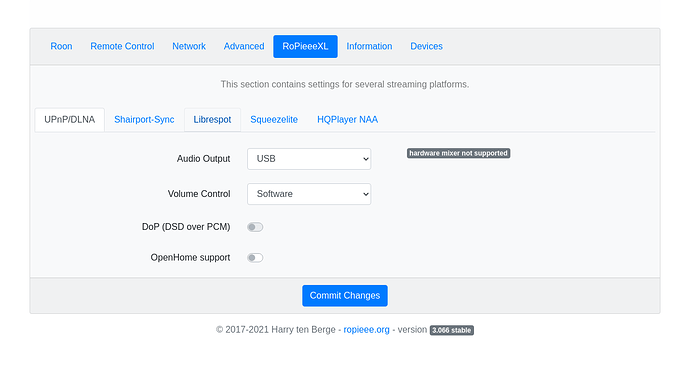 I suggest you post a feedback from the advanced page

Logs have been sent to RoPieee HQ with unique identifier 3196c36cb78515cb

Works on both Raspberries like a champ. Saw temperature falling from 40 C to 38 C on one unit and the other from 51 C to 48 C under identical conditions. Cool… and a big thank you.

Works with my other Raspberry Pi 4 Model B Rev 1.1.
I checked that bluetooth is ok with the 1.4 pi, though. Enabled BT in the 1.1 pi and put the card into the other one, could connect my phone.

I’m having some trouble updating my RPi3, which is connected on WiFi. (My other RPi2 on ethernet updated with no issue in a total of about 5 minutes.)

I saw the Update Available notification, Downloaded the update (took about 1-2 minutes), and restarted to update (after banner turned blue) all as prompted on the status page. The Pi came back online fairly quickly, but is sill on version 3.020.

Interestingly, there is stall a pink banner across the top “Update is being downloaded…” which has been there for about 30 min. It appears something has gone wrong along the way with the update. Here is the feedback identifier: 0cacbd328d841018 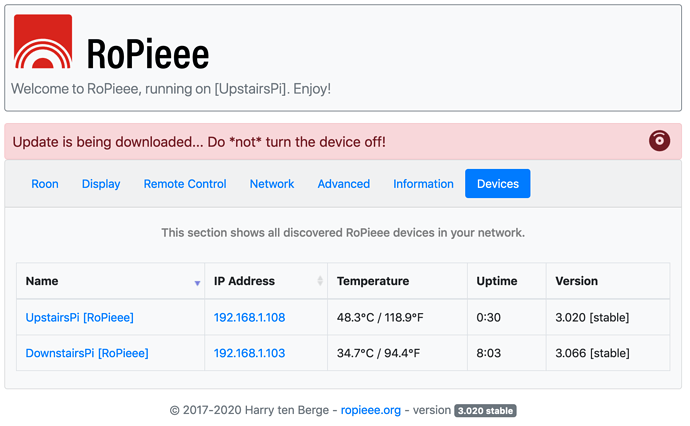 Thanks for your continued efforts on this project
-Jim

You’re on wifi, and I see an issue with bringing up the interface. Normally this resolves itself after a few seconds, but in this case the updater thinks it can do it’s work (and it can’t).

Few things you can do:

Your hardware is not recognised as a Pi 4, hence the menu won’t show.
I’ll release an update by the end of the week that fixes this.

Which endpoint do you use? The new UPnP software provides both an endpoint for UPnP and for OpenHome. Make sure you are connect to the UPnP one and not the OpenHome version.

Hi Harry,
I have another issue with the other pi testing bluetooth.
Connected my phone, I see the Ropieee on the BT panel, however don’t see any profiles as I have for the other connection, typically Stereo Audio and Phone Calls.

What is ALSA DAPM?

Thanks so DACs have to support it to make use of it ?

DAPM is only meant for HAT’s, so forget about USB.

This is basically power management for IC’s involved. In reality this means that, depending on if DAPM is enabled, outputs on HAT’s (SPDIF/COAX) get disabled after a period of time when there is no audio signal.

By default this was disabled, so output’s stay enabled. I received a report from someone with a specific DAC (forgot about type/model) that was not capable of switching inputs (so from OPTICAL to COAX for example) if there was still a signal on the selected input. Hence I enabled DAPM, but this had an unwanted side effect for some other users (resulting in devices being powered down because the input signal went away).

Anyways, hence the switch. If you never had to deal with this before (because, for example, you use USB) then forget it about

@spockfish Harry when will, or is it already, beta catch up with this stable?