Hi & hallo from New Zealand
Roon user for 18 months, love it to bits (pun intended)… have been experimenting with DSP settings in Roon over the last 2 weeks and I can certainly hear improvements with most tracks. However- this has happend multiple times now- x10 perhaps- Roon just stops dead in its tracks and there is… silence.

It has only started doing this since I added some DSP settings (sample rate conversion and volume levelling)… not before. Any thoughts?

ps. if I quit Roon remote on my iPad and try to restart the same song, no dice. But if I navigate to a new track/ album/ playlist after the crash, it plays just fine- and sounds great with the DSP! Please help with suggestions if you can… ta

I’ve moved your topic to the support section of the forum.
In order for Roon’s @support team to better assist you, please provide a brief description of your current setup using this link as a guide.

Thanks- I think most of my system details are at the front of my post. Here is the recent screenshot: 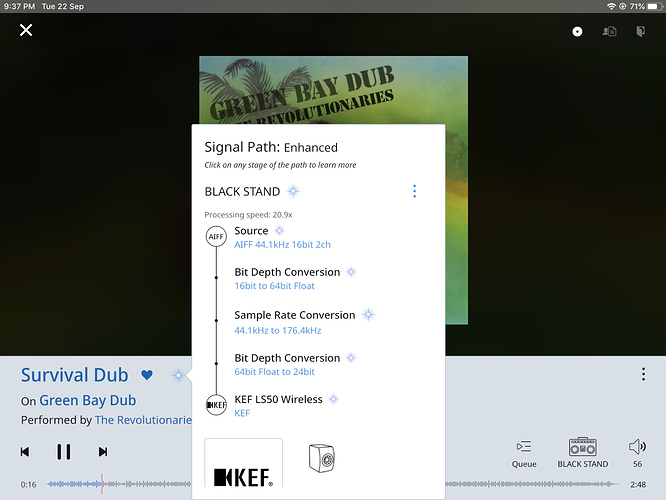 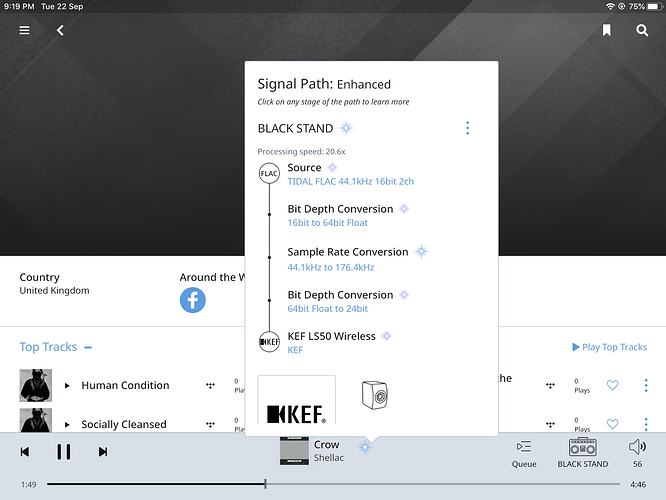 Network especially is useful to know. This is the template roon gives you if you start a support thread.

This is your problem… not enough puff probably.

Firstly, how is the core connected to your network? And where is your music stored? On the core? NAS?
What messages if any are displayed when this happens?

Thanks for the replies… I was unable to find the support template, but still… Roon server is connected via gigabit ethernet on the network… my home ISP connection is fibre… the Mac Mini has an internal SSD running Roon server, nothing else, and my music library is on an external 2TB spinning drive connected to the Mac Mini by firewire… the LS50W are network connected as well… no USB or WiFi in the setup/ system chain… would using DSP really cause an i5 2.3GHz computer with 16GB of memory to freeze?

When Roon does stop playing, about 50% of the time the message “Roon lost control of the audio device” appears at the bottom of the iPad screen, the other half of the time there is no message, the screen looks perfectly normal but press play/ pause and nothing hapoens…

DSP is a heavy load…you don’t show what the DSP setting you are using so maybe that would be of some help to us.

processing speed is an indicator…under 1.4X and you will be struggling

Try limiting your output to no more than 96kHz.

When I check the signal path the processor speed indication seems to fluctuate between 16x and 21x (see attached) - so thats perfectly acceptable from what I’ve read? 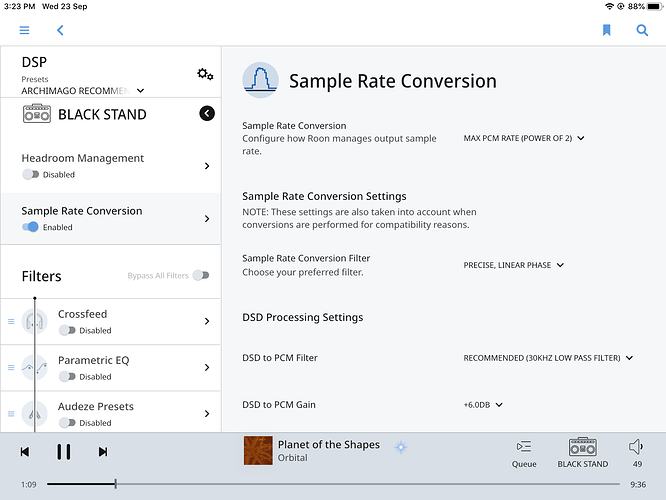 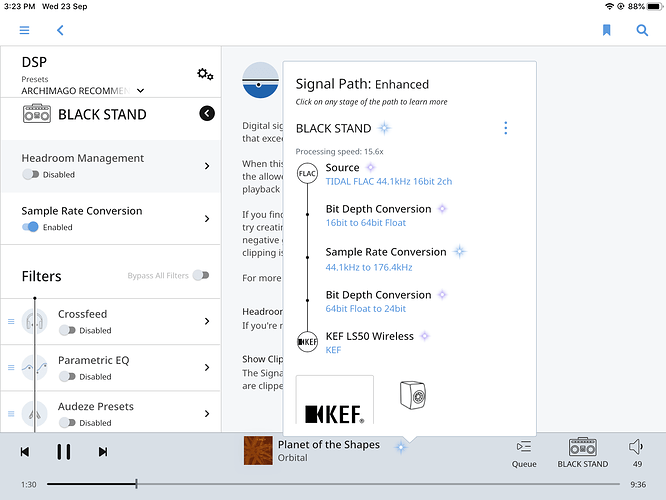 Its not the Mac running out of puff that’s for sure according to you speed unless it’s lying. Can you play a real 192/24 file to see if the behaviour happens with that this may help rule out if it’s the DSP causing it.

The “lost control” messages are ringing alarm bells for me. It suggests that there may be an issue with communications between core and the speakers. I’d check the network and look for unusual situations like a switch negotiating a 10mb path or similar. Also swap cables out where possible for something completely standard (not an expensive boutique item).

My running out of puff comment was based on perhaps you trying to upsample to DSD512 or other DSP operations concurrently. That seems to not be the case from your screen shots at least. BUT that CPU is under the recommended Spec for a Roon Core just so you know, but it will depend on a number of factors that will determine how and when that will be an issue.

that CPU is under the recommended Spec for a Roon Core

I thought i3 is the minimum.

I use a 2009 Mac Mini without problem, as long as I stay away from upscaling to DSD512. The signal path in the OP shows that there is plenty of processing headdroom for what is being done here.

Hello @magic_frank, my apologies for the trouble here. Have you tried playing to another zone or system output of your Mac?

It is but thats ivy bridge and the mm 2011 models were the prior sandy bridge chip sets…while it may well work for basic use its is officially under minimum spec. This was a spec based way back for Roon V1.2 IIRC and we are now at 1.7 for some time and I expect the spec’s goal posts might be needing some review, especially with respect to the ever growing amount of metadata that is being made available for the system to have to deal with.

Hi and thanks for all the replies and tips. Much appreciated. To update based on these;

I restricted upsampling to 96Khz as suggested, and processing speeds increased to between 25x and 42x visible in the signal path. This suuests to me the Mac Mini is not the culprit; however I do have the following spec Macbook Pro (late-2011 2.8Ghz Core i7 w/ 16GB RAM and 256GB SSD) that I could use as my Roon server/ core if anyone thinks this would be wise.

Regards my network/ ethernet cables, they are all standard Cat 5e supplied by Designacable in the UK and appear to be in excellent shape- all under 12 months old.

Apart from swapping out core machines, I’m thinking that perhaps my router setup may be playing its part. There is a fibe modem in the apartment connected to a Fritz!Box 7490 (both of these boxes supplied by my ISP). I also have an Apple Airport Extreme (6th gen 802.11ac) which is what the Mac Mini and Kefs are wired into. Would it be better to remove the Airport Extreme and just use the FritzBox with an ethernet switch, say a basic Netgear or similar?

Again, just to say as per the OP, the freezes only started to occur when I added some DSP into the mix… prior to that everything was a-OK

Righto- cheers then and look FFWD to thoughts from those more clued-up than I!

Please keep using 96kHz, and see if the problem occurs again. It’s not about further increasing the processing speed. It’s about what happened to other speaker users and above 96kHz.

If 96kHz also exhibits the same problem, then switch the core to a different hardware - since this does not require additional purchase in your particular case, unlike telling you to replace your network infrastructure.