There are 2 internet connections coming into the Dual WAN router. The Node 2i is located in an office in a shed approximately 150 feet away. The Node 2 is located within the house. The Nodes are connected via ethernet. 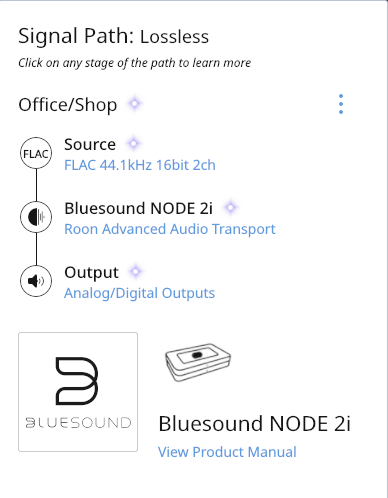 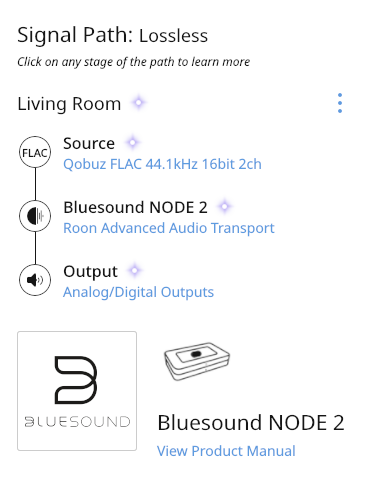 During playback on both Bluesound Nodes I get a static and sputtering noise. It isn’t constant but is frequent, about every 15-20 sec.This occurs during playback of my local library and through Qobuz. If I play local or Qobuz with the BluOs app there are no issues. If I play through my laptop, tablet or phone (as endpoints), through WIFI, I have no issues. This issue seems to be with the Nodes 2 and 2i (through Roon) only.

The bluesound endpoints suffer on wifi. If you are on wifi, try to use ethernet. Also, upgrade the node software to its latest version, there is a roon fix for wifi in it, should remedy your issues.

Thank you, Mark but per my Networking Details and Audio Device specifications the Bluesound Nodes are connected via ethernet.

Missed that. You are not providing the bluos version for the nodes, have u tried an upgrade?..Lots of folks have issues with bluos which were solved with upgrade

It looks like I missed including that info. Both Node players are at 3.12.13. I believe this is the most recent update. Would that be correct?

I have verified that my Nodes are at the most current update.

Can you please try to perform a factory reset of your affected players?

How do I perform a factory reset on my Bluesound Player? (Gen 2/2i and PULSE)

BLS-KB13-904 WARNING! THIS IS A FACTORY RESET OF YOUR PLAYER. ALL CUSTOMIZATION INCLUDING WI-FI NETWORK CONFIGURATION, FILE SHARES AND SAVED PLAYLISTS WILL BE LOST. YOU WILL HAVE TO RE-CREATE THESE...

I did a factory reset on both Nodes. The problem still persists on both.

Do you have any more recommendations for troubleshooting?

Do I need to send you the logs?

I just went through this drill, except my Node 2i is on wifi. After fending off tons of “can’t use wifi on Bluesound” posts, I found two workarounds. (For reasons too long to go through, it’s not practical for me to hardwire right now so that advice was not helpful.)

I believe you indicated that playing thru BluOS was better, which may be the same thing I discovered.

BTW, it seems that everyone on Roon forums blames Bluesound, and the Bluesound house techs I talked to blamed Roon. Lots of buck passing and finger pointing.

FWIW, here’s a link to a very long troubleshooting discussion that may have a useful nugget or two for you.

Thank you for your reply. I had actually read through a number of these threads, including yours, before I posted. Unfortunately nothing seems to fix it.

I have tried opening the BluOs app, then selecting Roon (from BluOs app) prior to opening Roon’s app, per your recommendation. This had no change for me. Am I understanding you correctly on the steps to take?

Yes, you are correct, I can play any music from the BluOs app (NOT incorporating Roon) and it’ll play flawlessly. It’s unfortunate because I do like the Node’s sound. I think as a stand alone product without Roon it’s a good value.

My concern as well is, if this issue Does get fixed, how long will it last? Do I need to hold my breath after every firmware or software upgrade? There is a long list of threads with Bluesound compatibility issues. I haven’t and don’t have any issues with either of my Bluesound players besides trying to incorporate Roon.

@dcw96161 how are you using the Raspberry pi as a workaround? Are you using it as an endpoint and then running it into the Bluesound input? I don’t have any experience with them.

I’m not sure if this helps with your troubleshooting.

Were you able to access the time stamped logs?

What I found was that if, starting on the BluOS app, I chose whatever music I wanted, then selected Roon as the output, all was good. Again, pointing BluOS to Roon, rather than pointing Roon to Node. Selecting music on Roon, and then selecting the Node as the end point gets me incessant signal stutter. Nanosecond hiccups every 3 to 5 seconds. So I don’t “bypass” Roon at all, it’s just a matter of changing the sequence of button pushing. I discovered that mostly by accident. It doesn’t make sense, and just reminds me of old video games like Myst and Riven. I have yet to hear any explanation for this but I’m not holding my breath.

As for the Raspberry pi, I did not want to go down that road. But I posted on that Roon forum as well, here, and got a lot of help from fellow Rooners. It turned out to be pretty simple. Since I play through an integrated amp with its own DAC, I did not have to purchase or attach a HAT/DAC for the Rpi. Although I may at some point for fun, now that I’ve gotten this far. It was about $50 in parts from Amazon (a Rpi and case), and an hour’s worth of assembly time, and another hour or so getting the software loaded properly, and I was in business. Software loading took a bit longer than it should because I missed an important instruction point. There are lots of resource links in the Roon/Raspberry Pi forum, and it winds up being pretty straight forward.

So these are two workarounds, but they’re just that. And the Rpi workaround isn’t a great solution anyhow, as it takes the Node out of the loop completely and renders it superfluous, making it a $500 paperweight. And again, my problem is different that yours as my Node is NOT on ethernet. (So you will be spared the Rooner mass pile-on telling you not to use Node on wifi.)

But I’ll work with these half-measures until I can get the Node hard wired. Or not. Apparently judging from your experience, that’s not a panacea.

In your situation, maybe you could try running the signal from a Rpi USB port into the Node then out to Roon, thereby bypassing the Node’s apparently wonky network interface? I have no clue whether that would do anything, but so much of the Bluesound criticism in this forum is focused on the Node’s network interface, and this would remove that from the equation completely because its signal would be coming in from the Rpi USB port, not an internet source.

I don’t get the same results as you do for your workaround. Here is what I did:

Open BluOs, choose music from my library, play, then select Roon from the left within BluOs. When I do this sequence, whatever was in my queue in Roon will then play. All of these steps are performed without opening Roon. Problem persists. I tried clearing out my queue in Roon, close Roon and then doing the above steps within BluOs again. 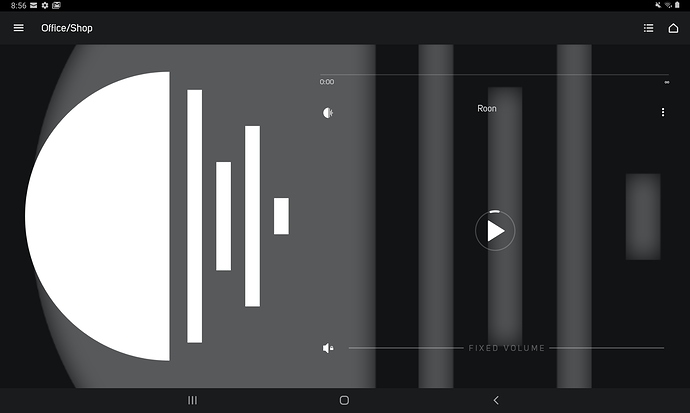 Did you notice a sound quality difference using the Raspberry pi? Am I correct that its just a network interface thats taking the signal from Roon and sending it to the DAC?

Did you notice a sound quality difference using the Raspberry pi?

I did notice SQ improvement, but ONLY insofar as the incessant signal stutter stopped. Since my DAC is part of my integrated amp (Cambridge Audio CXA61) and both the Node and Rpi feed into that, the DAC in the Node is irrelevant (or, more accurately, superseded by the DAC in the IA), and I don’t need a DAC for the Rpi.

Yes. I believe you are correct that the Rpi is just a cleaner signal conduit from Rock to DAC. I may add a HAT/DAC to it just to experiment, but that’s unrelated.

I like that the Rpi is portable and versatile, so I may also play around and move it about from zone to zone. But, again, that’s unrelated.

Our problems seem to be to be related but different. Related in the sense that the problems with network access in the Node seems to be a larger issue than just Ethernet vs wifi. Everyone here kept telling me to hardwire the Node, but the—so far—successful workaround in button-pushing sequencing between the Node and Roon, and your challenges even though you ARE hardwired, suggest strongly that the issue is not that simple.

The one thing I would add is that maybe your implementation of the workaround is incomplete. ISTM when you select Roon as the output in BluOS, the Roon queue should clear and accept the new input signal from BluOS rather than pick up and continuing whatever was in the Roon queue. But I may be misunderstanding that part of your post.

Do I need to send you the logs?

Thanks for letting me know those timestamps! Yes, can I please request that you use these instructions to send me a copy of your Roon Core logs? Thanks!

@noris the logs have been sent.

This afternoon I was able to resolve the issue, for the time being at least.

This caught my eye from @Robert_Frohn-Tefehne

I have the same problem!
Try factory reset and with an empty Bibliothek (library?) it works!
No shares on network and the sound is clear.
It seems to be a problem in network handling of the bluesound device ?

I went in my BluOs app and removed all shared drives. This cleared up the audio immediately for me. This was the only change I made since last week. Also, moments prior to removing the shared drives I had static/sputtering through Roon. Now gone!

Does the issue lie within Bluesound’s mapping of shared drives?

Could this be why the factory reset works for some but not all? If the shared drives don’t get cleared the problem remains?

Another note I’m now realizing. When Roon worked with Bluesound, prior to this issue, they were both connected to the same shared drive on a Synology NAS. Sometime before I started noticing the issue, I made a change. I attached an external hard drive directly to my NUC Rock and removed the mapping to the NAS. I left the Nodes, through BluOs, connected to the Synology NAS. Could there be an issue of having them look at separate drives?

@dcw96161 does any of this correlate to your situation?

@noris does this correlate with diagnostic findings?