Static with Nucleus via USB (until music)

When I open up Roon and switch my amp to the input which is a Peachtree nova 500 I get static during that app start up prior to playing any music. Once I start playing music the static disappears. my Roon nucleus is connected via a audio quest USB cable from the nucleus to the amp. When I try any other input on the amplifier such as optical from my Marantz streamer there is no static. There is also no static if connected via a computer.

I am also not using any filters through Roon. Perhaps you can tell me the exact settings I should have on the device main page for set up so that I have everything correct.

First, make sure you are using the right USB port on the Peachtree. USB A is for Apple Product Only, USB B is for everything else. And the other one is a service port.

Second, try a different USB cable. I’d go with a normal one and see if it makes a difference.

Can you share a screenshot of Device Setup for the Peachtree?

As Daniel suggested, does the same behavior occur with a different USB cable?

Yes attached is a screenshot. I’ll have to buy a cable, but the audio quest works flawless in other systems. I’d hope it’s not a $100 cable issue, but it’s not static once a signal is sent which is interesting. 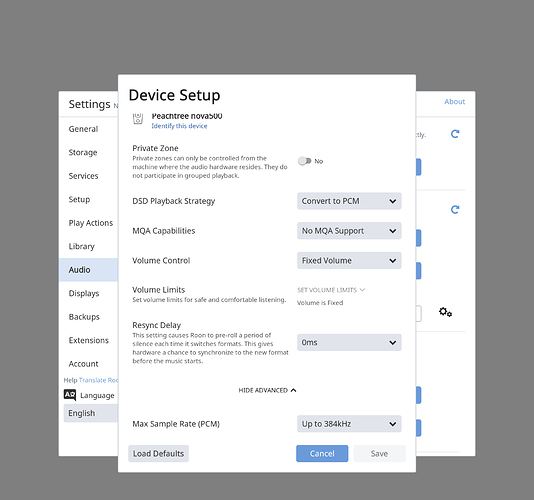 Definitely let us know how the test goes with another cable. You might also want to try connecting the device to a Windows or Mac device and see if the same behavior occurs there when it’s selected by Roon.

Yes still present in the new cable. I also switched USB ports on the Nucleus. As I said, the second I play music all is fine, even if I pause it. It’s like the ports aren’t communicating until I play. No issues with usb to my laptop.

Playing around with my amp I noticed if I select USB 1.0 (the button, not the input 1) versus 2.0 there is no static. However the manual states this should only be used on a Windows computer playing music files that do not exceed 96K. Windows users should set this to USB 2.0 if using music files that exceed 96K. Is it possible that there’s not a driver installed on the nucleus for the Peachtree nova 500? Or sometimes settings get changed to 192/24 and above by the user in the OS.

It appears that the Peachtree Nova 500 only supports USB 2.0 playback via Windows when using the Peachtree driver. There is no driver available for Linux that would remove this limitation with Nucleus.

However, the Nova series has worked correctly with microrendu plugged in the the usb 2.0 port. Is the 500 different than the 150 and 300 in this respect?

That sounds like an internal question? I know the Nova is designed with a 9028 DAC that’s not in the earlier models.

I surely don’t want to return the Nucleus, but unless there’s some form of driver/compatibility update with the custom Linux OS, not sure how this can be resolved.

I think I may have mis-interpreted the Nova documentation on this one, it appears that USB 2.0 playback is available for macOS as well. I do not see any explicit mention of Linux capability for the Nova 500.

I’m going to reach out to the Peachtree technical team for clarification on this issue. I will be sure to update this thread once I have heard back. Thanks for your patience while we get this sorted out!

Any possible update on this as we go into the weekend?

I have been working with David on this issue. We recieved the Nucleus back from him and have tested on multiple Dacs. We cant find the issue he is referring to. It is recommended that Roon and Peachtree work together to understand what the conflict might be. Sounds like a digital muting issue with the Dac circuit. But cant be sure since we don’t sell Peachtree.
Moon Audio

Connected a ROCK NUC via USB to Peachtree Nova 300 using the USB B input (USB A is reserved for Apple Devices Only) with the USB 2.0 button engaged.

NUC saw the Peachtree instantly. Had to change DSD playback to DOP. Played files up to 384 just fine, played DSD 128 via DoP just fine. No extra noise, hiss, or anything that the OP experiences.

However, native DSD does not work when connected. It would be great if it did, as DSD 256 sounds better.

We apologize for the delay in our response. We had scheduled testing in our QA lab with our in-house Peachtree unit, but I did not follow up with the results of our testing.

Our unit does not display the behavior you are reporting. However, it is not the nova500 model which may exhibit some differences in its USB implementation.

Additionally, we are not aware of any similar reports with the Nucleus and any other DACs at this time.

I will be sure to let you know once we have heard back from Peachtree regarding this issue. You are invited to reach out simultaneously as well.

If the USB interface is the same, even though they’re completely different DAC’s, what does that mean towards a solution? $1400 is acceptable given the high build quality and ease of use. I would like to recommend a “streamer” only Nucleus with WiFi, that would be a much easier sell. Why put in a small drive, when I have an unlimited library through Qobuz/Tidal.

Secondly, I’ve been waiting on a response to correct this, and then purchase the annual. We know the controversy on the price increase, so surely I would hope to be grandfathered in since I had a legitimate support request within my trial.

I think you’re very dedicated to an amazing music experience. I have both graduate degrees in Computer Science and an MBA, so I’m very impressed by this company.

I’ve had similar issues with a new Nova 500. Static hiss occurs intermittently at the beginning of some tracks, then disappears shortly after the track continues (or after I toggle the pause button). I’ve notified Peachtree and also Sonore (since it occurs … coincidentally or not … when Sonore / SGC gear is feeding the amp by USB A to B).

I did not have this issue with a Peachtree Nova 150. All other gear, settings, cables, etc. are virtually the same with the Nova 500. When I plug the Nova 500 straight into a wall outlet and listen with headphones, I haven’t heard any hiss. Nor with optical or analog connections. With music stopped, the speakers are dead quiet.

Sonore (Jesus) or SGC (Andrew) suggested a sonicOrbiter OS upgrade to 2.8 might help. I’m waiting on a micro card to arrive in the mail.

Christian at Peachtree says his people are aware of some noise issues involving the Nova 500 in interacting with Linux-based systems. He suggested that an upcoming Peachtree firmware upgrade should address these problems. I don’t know how long that might take.

Tom- thank you for your insight and further acknowledgment. Sad to see others experiencing it, but glad it’s not just my imagination. I did upgrade the Nova 500 to v 1.10.0.0, and hopefully the next will eliminate this issue. I’ll keep an eye out for that firmware.

This sounds a bit like the XMOS rate-change issue.