I’m curious why one of the Live Radio stations is a recording instead of a stream? 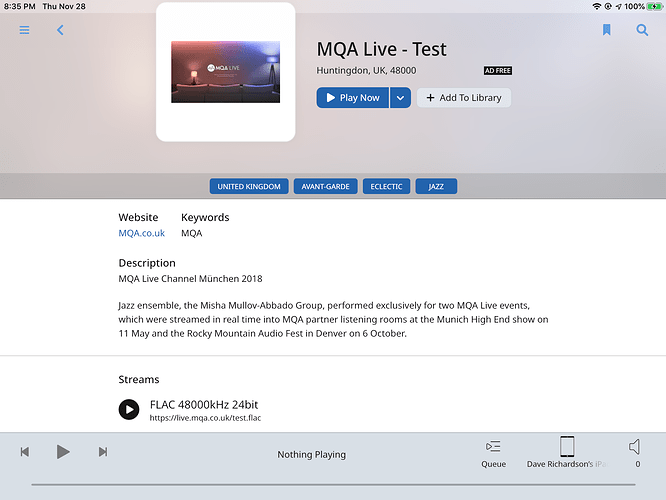 I does say test in the title and you have to search to find it, so I don’t think it gets in the way or is needlessly exposed for people who do not want it. It is easily ignored.

I have seen plenty of people who were excited to find it on a Roon/MQA Facebook group. So horses for courses.
Personally I think it’s exciting to know that MQA can be reliably used as a codec for Internet Radio.

FYI…lots of web radio are recorded sessions rather than live DJ hosted sets. If that is what you mean.

While I appreciate your MQA FanBoi enthusiasm, I don’t see what the type of file this is has to do with my question. Which is, why does this radio station consist of a single file when all of the other stations stream multiple selections.

It isn’t. It’s not whether the stream is prerecorded or not, my question is why does this one “station” consist of a single recording when all of the other stations offer multiple recordings as if they were live radio stations.

It is what it is, no more - no less … maybe MQA limited will expand on the content one day.
You could try contacting MQA limited so see if they have any future plans for it.
Not really sure there’s anymore to say on it.